The impending closure of Riverside Drive is another step-change in the transformation of the CBD. 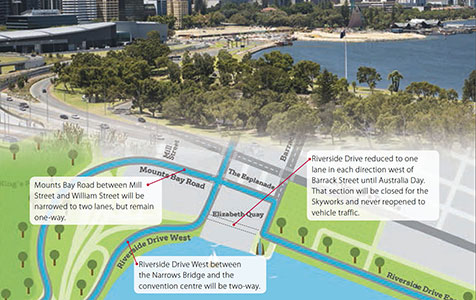 Australia Day is not just an excuse for crowds to gather for a fireworks display around Perth Water, the expanse of the Swan River between the CBD and South Perth; this year it marks D-Day for Riverside Drive as a continuous access route across the front of the city.

From January 26, the western end of the 80-year-old thoroughfare will be reclaimed for a waterway providing access to the inlet that will be the centrepiece for the new Elizabeth Quay.

Rest assured, there will continue to be much gnashing of teeth over this road closure as Perth adjusts to the rerouting of traffic. According to Main Roads data from 2008-09, more than 30,000 cars a day used this road, mainly to skirt the city’s southern boundary as they travelled east or west across the metropolitan area.

The Graham Farmer Freeway, including a tunnel under Northbridge, offers an alternative route. With two lanes each way in 2008-09 it took nearly 90,000 cars a day travelling east and west. The recent widening of that infrastructure to three lanes each way may well have taken further pressure off Riverside Drive, as intended.

Nevertheless, changes over the past couple of years to the inner CBD’s traffic flows have slowed passage through the city, so the closure of part of the Riverside Drive will impact on all motorists coming near the CBD, whether they want to enter it or skirt around its periphery.

There is no doubt, in my mind, that this will add to Perth’s rising congestion burden and therefore have an economic cost.

However, despite my sympathy for daily motoring commuters (I am one, after all) I am going to upset a few readers here and say that this is the price we have to pay for the convergence of two important and, overall, beneficial changes to Perth – rapid economic growth and the usability of our CBD.

For many years, Perth’s business and retail hub, and its southern extremity, was criss-crossed by highways focused on allowing cars to rapidly transit across it – especially from east to west. For commuters in cars, even those with no business in the CBD, it was very convenient.

But the required tarmac strips, especially through the wind-blown, concrete canyon of St Georges Terrace, created a sterile environment that wasn’t helped by the inner city’s lack of residents and nightlife.

It ought not surprise anyone that the Dullsville tag was applied to Perth at the zenith of that vehicle-dominated period.

Sure, we could zip into (or out of) the office in 10 or 15 minutes, but that is of very minimal benefit, limited to a relatively few people. In any case, Perth’s population was rising and roads were clogging-up naturally as a result.

On the flip side, in the middle of a mining boom, our sterile city centre wasn’t proving much of a drawcard when we needed to attract and keep the world’s best talent here.

Something had to change and the City of Perth went about unpicking all the one-way streets, narrowing the highways and changing the pedestrian crossings (mainly) so that people on foot and could keep moving without a five-minute wait at every vast intersection. The development of key locations such as Brookfield Place and new liquor licences that allow smaller venues have also played a big part in changing the city.

Head into the CBD at 5pm on Friday and you’ll notice the change. Five years ago you would have been bowled over by the city workers, whose departure en masse created a sterile desert. These days the place is humming.

Now, with the foreshore development, we will finally see the city and river’s edge reunited after eight decades and, hopefully, become an equally vibrant hub of activity.

You don’t need to be a devotee to urban planners like Jeff Speck, author of Walkable City who was in Perth last year, to appreciate that Perth is becoming a much better place to work, party and visit than it was just a short time ago.

Good urban planners recognise that cars have a place, but they can’t have a monopoly, or be so dominant that everything else must give way.

In our car-oriented city, that adjustment is tough. And we ought to be careful that those shocked by the change are heard; not every tweak of our road system will have the desired effect.

Pushing people onto public transport is not a simple answer, with those who commute via bus and train paying just a quarter to a third of the true cost of their journey. Fewer cars might make the city friendlier but motorists pay the full economic cost of their journey and then some, so there is a public burden to this on top of adding to the commuting time of city workers who choose to drive. The cost of public transport has to rise, if only to make it more sustainable and provide the economic case for expanding the network.

In the end, these changes to our road system are something we are all going to have to get used to. Change is always challenging but Perth has improved significantly.

If people end up associating that improvement with the mining boom, because of the need to attract people here, then that is a wonderful legacy we’ll all be grateful for.