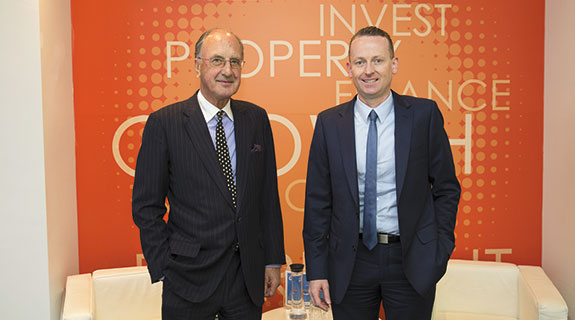 SYNERGY: John Mair (left) and Damian Collins say the merger of the companies is a natural fit. Photo: Attila Csaszar

Both businesses will retain their respective names under the agreement, which went unconditional at the end of April and is expected to settle early next month.

The combined entities will have more than $750 million worth of property under management, employing more than 70 staff.

Momentum Wealth managing director Damian Collins will remain in his position, while Mair & Co founder John Mair will act as a consultant and remain a director of the agency’s investments arm, Mair Property Funds.

Mr Mair said discussions began around September last year following an accounting seminar at which both gentlemen were making presentations.

“We talked about the respective viewpoints and one thing led to another.”

Mr Mair said the agency side of Mair & Co’s business would grow considerably as a result of the merger, due to the amount of referrals from Momentum Wealth’s residential investors interested in commercial property.

“It’s a very natural fit,” he said. “From our point of view, it’s more business, a better opportunity for our staff and a larger organisation.”

Mr Mair said Momentum Wealth’s marketing expertise would provide an enormous benefit to Mair & Co, particularly in terms of its funds management offering, which involves a portfolio of commercial properties valued at around $150 million.

“It will effectively give us a much bigger pool of investors, which will enable us to buy more suitable investment-grade property and also help us buy more expensive property and move up in the price range,” he said.

“Usually by moving up in the price range you can get slightly better yields, so those are the main benefits from our point of view.”

Assets to be targeted are expected to be in the $10 million to $50 million range, with Mair’s focus continuing to be on retail and industrial properties.

“There’s a boutique space where it’s too big for individual investors and too small for the big institutional funds,” Mr Collins said.

“There is a good niche there and that’s where we’re going to be targeting.

“Obviously we have to be cautious in the market, there is a lot of money chasing yield.

“Just like we have been selective at Momentum Wealth, Mair is very selective.”

Mr Collins said the merger would also facilitate an expansion of investment opportunities outside Western Australia.

Mair & Co recently launched a syndicate in Melbourne, which was popular with clients, while Mr Collins said Momentum Wealth’s customers on the residential side were no longer parochial about location.

“It just has to be a good investment, and if it’s in the major cities – Sydney, Brisbane, Melbourne or Perth – it seems that clients are certainly more than happy,” he said.

Mr Collins was also of the view that the merger was a complementary fit, with the skillsets of both companies expected to create significant operational synergies.

“We’re strong in the residential side in acquisitions and developments and their strength is in commercial management and syndicates,” Mr Collins said.

“For our clients, if they have commercial property, we now have the expertise in-house.

“But also for our investor clients, we are now able to offer them more than just residential property.

“We will have a syndicate offering and our goal is to build that up substantially in the years ahead.”

The merger follows a significant expansion by Momentum Wealth last year, after it launched a residential development arm.

Momentum Wealth currently has two syndicate offerings – an 18-apartment development at Carine Rise, on land purchased from LandCorp and Cedar Woods last year, as well as a 36-apartment mixed-use project in Samson.
Sales at Carine are well under way, with building to start soon, while an official launch of the Samson project is expected early next month.