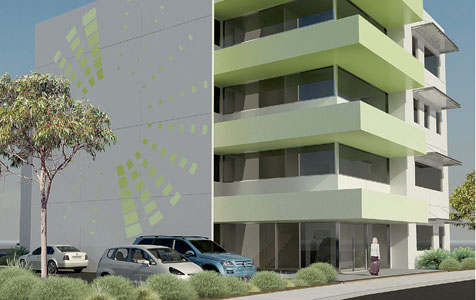 An artist's impression of the completed development.

The City of Stirling has approved a $10 million office development in Mirrabooka near one of the proposed MAX light rail stations.

The development is the largest planned building of its kind in what is a largely residential area with only a small number of businesses.

The City of Stirling is banking on a range of developments and refurbishments in the area, including the advent of light rail, to increase local business opportunities and reduce current levels of antisocial behaviour.

Despite the state government having delayed delivery of the $1.9 billion light rail project until 2019, and allocated only $432 million in the budget through to 2016-17, City of Stirling planning director Ross Povey said discussions were under way on advancing the project in Mirrabooka.

He said the city was working with the Department of Planning and Department of Transport to connect Sudbury Road to Chesterfield Road to allow for light rail, which would also open up neighbouring land for commercial development.

Mr Povey said detailed design work would be finished mid next year allowing for construction later in the year of a range of new infrastructure it hoped would help turn Mirrabooka into a key hub along the light rail route.

“The city is keen to see a significant increase in people working and living in the (Mirrabooka) centre, which reflects the proposed infrastructure investment in transport and the town centre amenities,” Mr Povey told Business News.

Frank De Luca, who owns a security business and is developing the office building on land on Chesterfield Road that he has owned for 25 years, said the suburb was on its way to making major improvements.

To make way for the new development, a small office building Mr De Luca leases to a not-for-profit migrant centre will be demolished once the lease runs out next year.

Mr De Luca said he was targeting government tenants, which already had a presence in Mirrabooka at licensing departments and a Tafe.

“If you’ve got different types of businesses there (they will) discourage these vagrants from hanging around,” Mr De Luca said.

“Once this development goes ahead, that particular corner where we are it’s just going to have a new lease of life.”

Construction of the office development, which will be four storeys with 380 square metres of space on each level, is due to start at the end of next year.

During the planning process, Mr De Luca and the architects, Brian Wright Architect, incorporated large areas of glass panelling into the design to allow staff inside to maintain a watch over their surrounds.

Mr Povey said encouraging new development to provide passive surveillance in this way was one of a number of changes the City of Stirling was implementing, in addition to its large CCTV and 24-hour security hotspot patrols.

The city is also planning a high-density residential development, Northwood Grove subdivision, in the town centre close to the bus station and shops.

“This type of development means that people are in and around the centre at different times of day and night and provides a degree of passive surveillance or eyes on the street,” Mr Povey said.