Middle Island Resources has set upon an aggressive exploration and development program at its Sandstone gold project, with ongoing drilling identifying the first new significant gold anomaly within a stone’s throw of the existing processing plant. First pass air core drilling has found two separate, near-linear, gold zones that extend over some 600 metres and 300 metres, respectively. 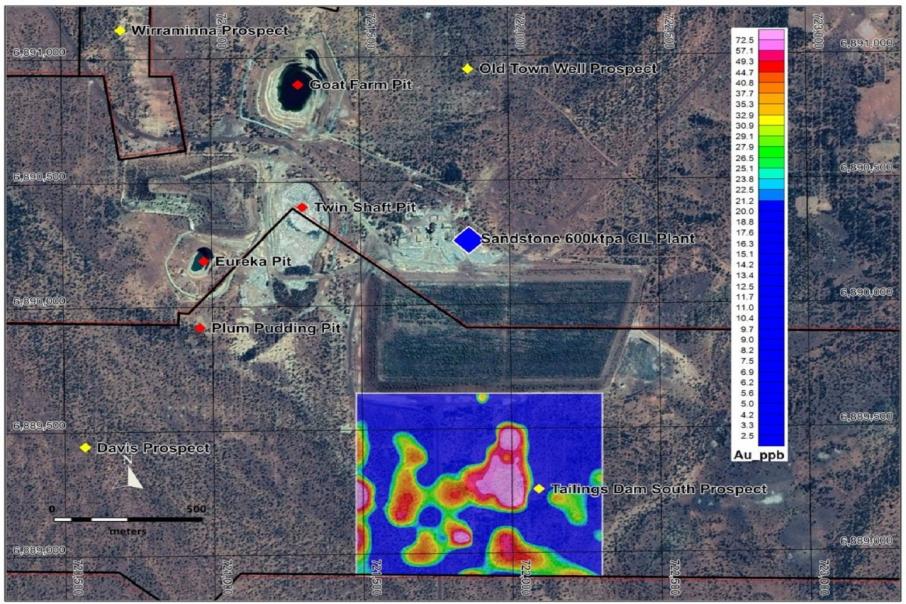 Middle Island Resources has set upon an aggressive exploration and development program at its Sandstone gold project, with ongoing air core drilling identifying the first significant gold anomaly of the program within a stone’s throw of the existing processing plant. First pass air core drilling has turned up two separate, near-linear gold zones that extend over some 600 metres and 300 metres, respectively.

In an update this week, the company said that its new Tailings South gold target is defined by notable gold geochemical enrichment just beneath 8 to 15m of transported sheet wash cover.

Transported cover is generally barren of gold – with the possible exception the odd alluvial nugget, which means that shallow air core drilling can be a useful first pass tool to help explorers pin down deeper drilling targets.

Middle Island paired its new drilling results at the Tailings South target with geological and structural information and the company said the new gold amomalies are oblique to the geological horizons and parallel with the overall structural trend – information that will likely be compared to other deposits in the region in order to set the deeper drill targets.

Middle Island said its ongoing RC drilling is looking good and although the assays are yet to quantify or confirm the presence of gold, quartz veining and gold-related alteration leads the company to believe that it may have found at least one new gold deposit.

The ASX-listed explorer and developer has now completed about 11,000m of its planned 12,300m phase one RC drilling program.

It is planning to undertake a major mineral resource update following the receipt of all assays from the 17,900m drill program.

It is also targeting an update to the current Sandstone gold project pre-feasibility study by the end of the June 2020 quarter.

Middle Island has long harboured the view that the broader Sandstone project around its old mill is likely still hiding a few lucrative deposits and whilst it is still early days, the first pass exploration work would appear to underline that view.