For the fourth time in as many weeks, Middle Island Resources has ferreted out another emerging deposit less than a kilometre from its mothballed 600Ktpa processing plant in Sandstone, underlining the company’s intention to restart gold mining in the historic West Australian mining precinct. New results have extended the Plum Pudding deposit to the south and include 3m grading 3.72g/t from 29m and 10m grading 3.08g/t from 41m. 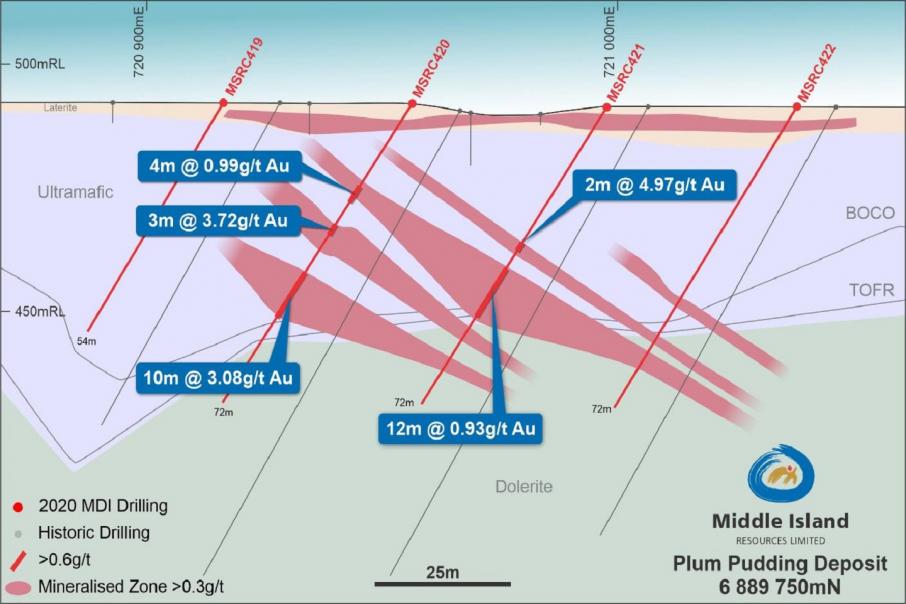 For the fourth time in as many weeks, Middle Island Resources has ferreted out another emerging deposit less than a kilometre from its mothballed 600Ktpa processing plant in Sandstone, underling the company’s intention to restart gold mining in the historic West Australian mining precinct.

The new results have extended the Plum Pudding deposit quite substantially to the south and include 3 metres grading 3.72 grams per tonne from 29m down hole and 10m grading 3.08g/t from 41m.

The deposit appears to contain a very high-grade core with historic results such as 17 metres grading 8.16g/t from 33m and 11m grading 22.5g/t gold from 17m defining the hot zone.

Middle Island’s drilling at Plum Pudding looks to have enabled the future calculation of a modest resource over a 240-metre strike length. The mineralisation is sitting in the oxidised rock profile and appears to consist of multiple stacked gold zones that are up to a combined 120m thick.

According to the company, Plum Pudding is likely to be a high tonnage deposit that may provide the basis for another satellite pit. Middle Island will now look to assess the viability of the Plum Pudding resource during the impending update to the previous Sandstone project pre-feasibility study.

Middle Island said that Plum Pudding will be subject to further drilling as part of the phase two program prior to inclusion in the upcoming global resource update. To date, the company has drilled 14 targets for 13,400m during the phase one drilling program across the Sandstone project.

Historic drilling by Clackline during the 1980s identified the Plum Pudding gold anomaly and further work lead to the construction of a small laterite pit by Herald Resources in 1993. Laterite is simply a very weathered clay and iron-rich rock and sometimes gold is enriched in this horizon, usually proximal to the primary gold source.

Meanwhile, phase one infill drilling at the Wirraminna deposit has also come up with some reasonable numbers including 5m grading 1.54g/t from 56m and 12m grading 0.95g/t from 90m depth.

The drilling here was designed to extend and infill the existing mineral resources and provide a basis for an update and potentially upgrade the contained ounces. Middle Island said that a re-optimisation of the Wirraminna resource in 2019 saw an optimised pit that reached the bottom of the modelled gold mineralisation, therefore further drilling and the new results should see an improvement in the optimisations here.

There are still quite a few assays outstanding from the company’s phase one program with 65 holes or 4,209m worth of drilling still to come in, which should provide for a touch more excitement and some solid news flow in the coming weeks.

With a current average of four for four, more new gold discoveries may not be out of the question now for Middle Island who is clearly blooded now for the hunt.