WA-based explorer, Middle Island Resources, has added another notch to its exploration belt by becoming a first mover in the Northern Territory’s unexplored East Tennant province, where it has so far been awarded six out of 10 exploration licences covering part of its proposed Barkly “super-project”. The company is now confident East Tennant is, like the well-established Tennant Creek mineral field to the west, hosting IOCG ore bodies. 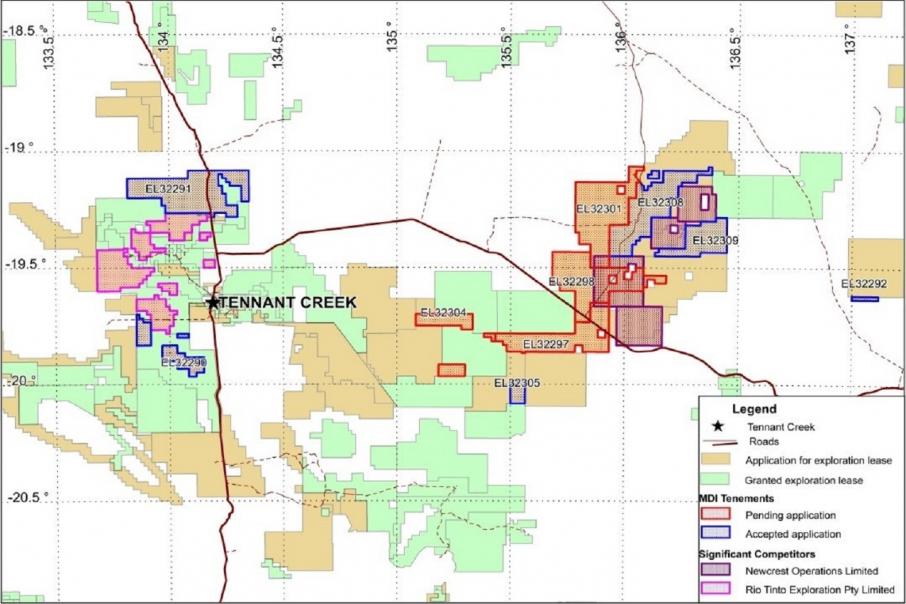 The company, which has been busy consolidating its Sandstone gold assets in its home state of WA after withdrawing from a gold project in Burkina Faso earlier this year, has so far been awarded six out of 10 exploration licences covering 1,890 square kilometres of prospective iron oxide-copper-gold, or “IOCG”, ground, some 150km east of the historic Tennant Creek mining centre.

The other four ELs, representing a further 2,022sqkm, are currently the subject of partially- or wholly-competing applications.

Collectively, these holdings make up Middle Island’s Barkly “super-project” and semi-continuously extend for over 350km along the axis of the East Tennant Ridge from Tennant Creek, east across the Barkly Tableland and towards the Queensland border.

The company is now confident that East Tennant is, like the well-established Tennant Creek mineral field to the west, potentially hosting IOCG ore bodies.

The East Tennant ELs only became available in the first half of October this year when an exploration moratorium over the area was lifted by the NT Government.

The company identified the Barkly Tableland Region as containing an extensive area of underexplored basement potential after assessing both the Australian Government’s Exploring for the Future datasets and the historic open file data – exercises which led to the identification of several high priority IOCG targets extending beneath the sedimentary cover which runs along a sinuous corridor from Tennant Creek to Mt Isa.

For Middle Island, the project represents a low cost exploration opportunity to identify high value targets of interest that might ultimately be of interest to major and mid-tier resources companies.

It is now expected that Middle Island will begin its first exploration campaign during the 2020 dry season once all the regulatory approvals have been met.

Middle Island Managing Director Rick Yeates said: “The then pending, and now completed, divestment of the Reo gold project in Burkina Faso provided the opportunity for Middle Island to identify a new project, with the focus very much on a lower risk, Australian gold or copper gold opportunity.”

“On the basis of extensive internal and pre-competitive government research, and recognising increasing corporate interest in junior explorers with large, prospective landholdings, we are extremely please to be able to present the Barkly IOCG copper-gold super-project, which we firmly believe represents a significant, accessible, highly prospective, low entry cost, greenfields exploration opportunity to complement the more advanced  and wholly-owned Sandstone pre-development gold project in central WA.”