Paul White says he hopes to be able to deliver investors a return within three years. Photos: Attila Csaszar

Western Australia’s craft spirits market is showing early signs that it will follow the overseas experience and mature as consumers become more conscious of provenance and willing to experiment.

To ride the wave of enthusiasm for locally produced spirits, Paul White is in the midst of an equity crowdfunding campaign to bolster marketing efforts and working capital.

Director of Margaret River-based The West Winds Gin, Mr White said there was a surge in craft spirits overseas matched by interest from larger distilleries in buying craft operators, particularly in the US.

He expects a similar pattern will likely develop in Australia.

West Winds is aiming to raise $3.5 million through the crowdfunding platform Equitise, on the back of a forecast increase in sales to $4 million in FY18, up from $2.7 million in FY17.

The offer went live last month, with private investors able to gain a stake in the business from as little as $500. About $620,000 has been raised thus far, with the offer closing on July 17.

Mr White told Business News he hoped to deliver investors a return within the next three years.

“We want to ensure we continue to build a profitable business so there is potential for dividends down the track, or a trade sale, or potentially an IPO (ASX listing), but at the moment the focus is on continuing to build the business and raising the capital,” he said.

“It’s a good way to increase brand awareness and gain a spread of investors, so in the event that we do decide to go public, we’ve got a spread to start with,” he said.

Mr White said West Winds had a few projects in the pipeline, including two new gins – one to be announced within the coming weeks and the second to be released around Christmas.

It will also be launching The West Winds Gin Bar at Bill’s Bar and Bites in Leederville within the next six months.

“Bill’s is an existing bar in Leederville so we’ll be running a separate bar down one end in a separate room and it’ll be open to the public on weekends,” Mr White said.

“It’s a way for us to showcase our products and teach people about gin.”

West Winds intends to set up a small distillery at the site to offer educational make-your-own-gin experiences to the public and host training events within the industry. 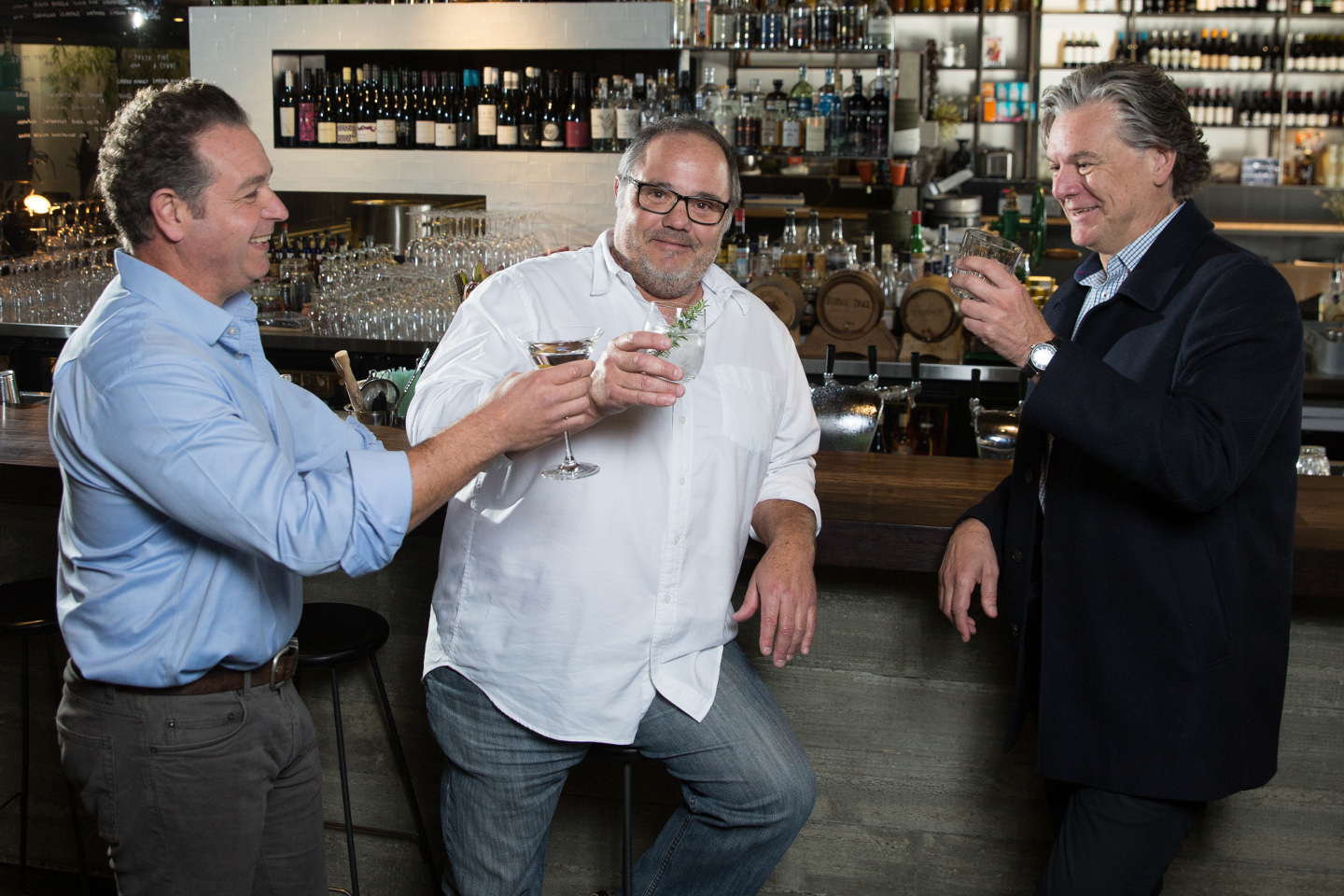 Jason Townes, Matt Giudice and John McVeigh plan to establish a gin distillery in Fremantle by the end of the year.

The team behind Bread in Common, Strange Company bar and Ronnie Nights bar, all in Fremantle, has also caught wind of the potential of craft gin, and are planning to establish a gin distillery by the end of the year, called Republic of Fremantle.

Long-time Fremantle locals Jason Townes, Matt Giudice and John McVeigh plan to launch what will be the port city’s first distillery in part to reinvigorate the west end.

Republic of Fremantle is expected to launch its first two gins by the end of the year, before opening a bar and restaurant at the same warehouse location by late 2019, where it will offer gin-making classes.

“When I was 18 to 25 knocking around in Fremantle, the high street was full of bars,” Mr Townes told Business News.

“But over the last few years I’ve found myself going out of Fremantle more and more to Northbridge and Perth.”

Mr Townes said he was interested in bringing the small bar experience back to Fremantle.

“In our business plan we’re gearing towards exporting and want to be a successful brand overseas, but I firmly believe you have to have a heart and soul wherever you are,” he said.

Mr Townes said the trio had been developing its recipes for the past few years and would be using grape spirit as a base for its gins, to be distilled using copper stills from Germany.

“The Republic of Fremantle is building on the legacy of wine merchant pioneer Lionel Samson,” he said.

“Founded in 1829, Samson’s business imported the first gins into Western Australia, and its subsidiary, Plantagenet Wines, is sourcing the wine required to produce base spirit for our gins and vodkas.

“The range will celebrate the flavours of West Australian wine and feature botanicals from the Perth coastal plain.”

As with the trio’s past three ventures, Mr Townes said they would be commissioning the architect behind the Queen’s Hotel and Shadow Wine Bar, Michael Petroni, to design the lofty warehouse-style venue located on Pakenham Street.

Great Southern Distilling Company director Cameron Syme, who began producing gin in WA 15 years ago, said he’d heard of a number of distilleries targeting Fremantle as a potential location to set up, which to him suggested a boom in local distilling.

He said activity in Europe and the US showed there was ample room in the Australian craft spirits market for more competition, provided people were making quality products.

“We had some research done that says, in the US, craft spirits supply 2.5 per cent of their domestic consumption,” Mr Syme said.

“I think there’s an opportunity for massive growth within the craft spirits market as people want to know more about where their products are made and what’s going into it and that sort of local provenance.”

“Giniversity is now pushing 50 per cent (of sales) with Limeburners, so we’re now half a gin company and half a whisky company,” he said.

“A lot of it really is about education and I think traditionally Australians haven’t really understood spirits, and this (Giniversity) is all about helping people to understand what you should be looking for in a gin and what goes into making it.”

Mr Syme said consumers had begun to ask what was coming next, following the success of Giniversity.

Great Southern will launch a new hemp gin on World Gin Day this week (June 9), following the legalisation of hemp as a food product in Australia and the establishment of local producers.

It will also be introducing a new distillation method called vacuum distillation, which allows the alcohol and botanicals to be boiled at a much lower temperature (28º Celsius) to produce a higher-quality extract.

“That’s really where I think gin can be now, on the cutting edge of what botanicals you are using and what distillation methods,” Mr Syme said.

About 15 years into the business, he said Great Southern Distilling Company was making profits but wouldn’t consider a trade sale in the future, having already turned down two major spirits companies interested in taking a stake.

“We’d like to keep this as a Western Australian family owned business,” Mr Syme said.