Let’s leave gas behind as a power source

Power provision is a major challenge for Western Australia. 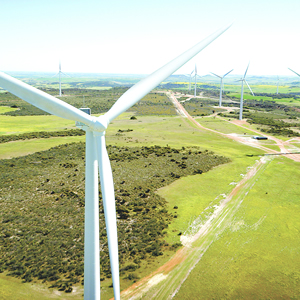 WIND CAPACITY: At 200MW of rated capacity, the WA power grid has taken about as much wind as it can handle without costs getting out of hand. Photo: Tim van Bronswijk

WESTERN Australia has large reserves of lower-grade coal near Collie, about 300 kilometres south of Perth. The power system in Western Australia was originally built on Collie coal from high-cost underground mines, which were highly unionised and low productivity.

The transformative event in the Western Australian power market was the building of the North West Shelf Project in 1984. That project was given a contract for supply of gas for power generation in the south-west of the state, which helped get the whole project - principally an LNG project - over the line commercially. The advent of a significant and reliable gas supply gave the coalmines their first competition. They responded by changing to open-cut mines and lowering their costs.

Gas turbines are cheap to install and very flexible in operation. With a cheap gas supply, gas grew to provide 65 per cent of WA's power. Contracted gas supplies remained at about $2 per gj up until 2005. This equates to about $US12 per barrel in energy equivalent terms.

The most recent contract signed was for gas from the Reindeer field in the offshore Carnarvon Basin. This was at $7.80 per gigaloule, equating to $US50 per barrel. The contract is with Sino Iron for its $5 billion magnetite mine at Cape Preston. For a mine with at least a 25-year life, the gas supply contract is for only seven years, with the first four fixed at $7.80/GJ. After that, the price changes in line with the oil price. This is an indication of how tight the gas market in WA has become, and how much tighter the petroleum companies supplying the gas expect it to become.

KEPCO is in the process of nearly doubling its nuclear capacity, but nuclear is not an option for WA. The nuclear plant builders have chased economies of scale and now sell plants ranging from 1,000 megawatts to 1,600MW. At that size, they are just too lumpy for the 3,500MW power market in WA. But we do have plenty of coal.

Power demand in the south-west of the state, in what is termed the South West Interconnected System, is currently about 3,500MW of peak demand with growth of the market at 150MW a year. That is 3.4 per cent per annum.

The total capacity of the system is 4,400MW. WA's shortfall from its reliability requirement is upon it much sooner than for the eastern states.

The other complication is that the long-term, cheap gas contracts with the North West Shelf Project start running out in 2013 with a steep decline in contracted volume by 2015. The precedent set by the Reindeer contract is that WA will be buying a lot of its gas for power generation in 2015 on short-term contracts at a price set by the then prevailing oil price.

This has the potential to more than triple the price of power in WA. If WA decided to rebalance its power market by growing the coal-based share, it will have to start soon, as steam turbines for power plants have a three-year lead time from order to delivery.

There is another big complication in the power market. The Council of Australian Governments decided that 20 per cent of Australia's power should be from renewable sources by 2020. Utilities that fall short of that target will be fined $0.065 per kilowatt-hour under the Renewable Energy Target Scheme (RETS).

There is a similar mandate in California that requires 20 per cent be supplied by renewables by 2011. Utilities there are currently in a mad scramble to install gigawatts of solar power using technologies that haven't been proven at a commercial scale yet. What the RETS scheme means for WA is that all the growth in demand from 2014 has to be from renewable sources to meet the target. For the east coast, they will have to close 2,000MW of existing capacity at an economic cost of about $5 billion.

The renewable source that has been installed to date in WA is wind power. At 200MW of rated capacity, the WA power grid has taken about as much wind as it can handle without costs getting out of hand. For the existing 200MW of wind power, Western Power estimates that 60MW of gas turbine capacity is required for load following purposes.

Given the spasmodic operational requirements of the load-following plant, it runs at very low efficiency and hence high cost, compared to more regular use. The wind generating companies get paid for the power they produce while the wind blows; they don't have to pay for the load following plant required to make their power usable. WA consumers do that.

Solar power has been virtually ignored in WA, which is strange given the amount of well-lit desert we have. A US company called First Solar has got the cost of manufacturing 'thin film' photovoltaic panels down to $US0.93 per watt of capacity. At an installed price of $US2.50 per watt, photovoltaic power might be produced for $US0.075 per kWh, making it quite competitive with peaking power based on gas.

The peak in photovoltaic output is only three hours out of phase with peak daily demand in summer at 3pm. Photovoltaic power is infinitely scalable also. It could be installed at the edges of the grid in Wheatbelt towns.

Installing photovoltaic panels in an open paddock is half the cost of installing it on a roof, so, as a society, we could get twice as much bang for the buck doing the former instead of the latter.

The other solar technology that is very likely to play a big role in WA's future is called 'power tower'. This consists of a field of heliostats (mirrors that follow the sun) focused on a central tower, which heats a working fluid (either synthetic oil or molten salt).

The working fluid in turn provides the heat to turn a turbine, which would be based on steam for 50MW and above or a low boiling point organic molecule, such as isopentane, for units up to 5MW.

The cost of electricity from a power tower may end up being much the same as that from a photovoltaic system, with the big difference is that the power from the former will be despatchable, and thus far easier to integrate into a grid.

The recent big advance in power tower technology was to reduce the size of the heliostat mirrors down to that of a LCD screen, reducing the heliostat portion of the system cost from 50 per cent down to 30 per cent.

Another run up in oil prices is inevitable. Smaller mines in WA not on the grid will be hit hard by the oil price.

The cost of a power tower could be of the order of $6 million per MW, as opposed to $0.5 million for a diesel generating set. At $2 per litre for diesel, though, a power tower might pay for itself in two years.

WA should get good at understanding and installing heliostats as soon as possible. They could be the saviour of the WA mining industry from early next decade.

n David Archibald is a Perth-based scientist in the fields of climate and cancer.