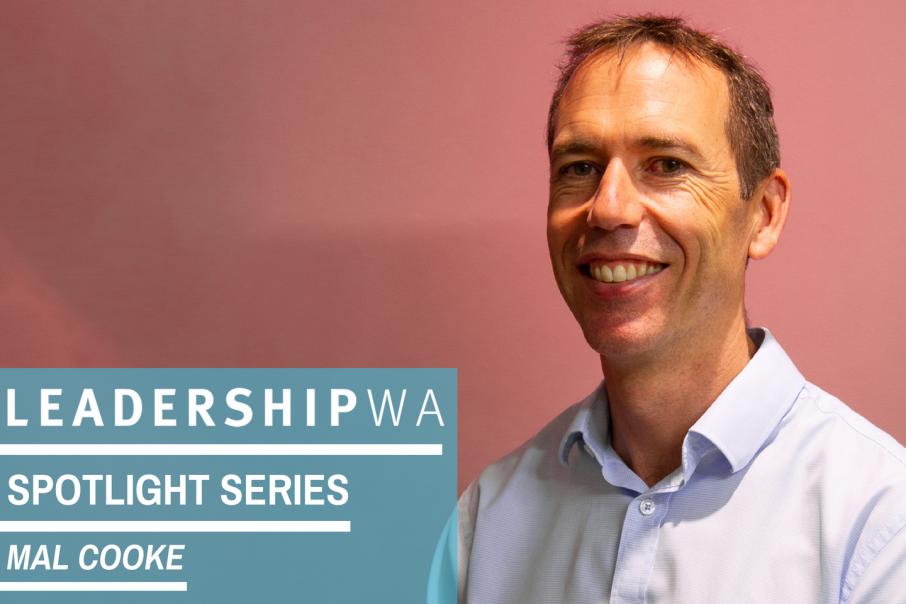 For 22 years, Mal Cooke was a lawyer at Herbert Smith Freehills. He was made a partner in 2006 and focused his career on commercial dispute resolution until his resignation earlier this year. He is married with 2 teenage daughters and is Chair of the Boards of Shenton College and Riverview Church. Mal is a graduate of Leadership WA’s 2012 Signature Program.

In this interview, Mal reflects upon change, and leadership of self.

For Mal Cooke, a job title does not make a leader.

“Leadership is centred around change – shifting yourself first, and then perhaps others, an organisation, a project or a community to a preferred place. That’s where innovation fits for me – finding better ways to create shift.”

Mal came to the view that the best way to grow was to embrace a significant personal change, which is why, after 12 years as a partner at Herbert Smith Freehills, Mal stepped away from the role in March 2018.

“I’ve had 22 rewarding years in the one firm. Most of what I was taught and read about leadership over that time focussed on leading others. This decision is about leading myself better. I don’t want nervousness about change to have a hold over me. This is as an opportunity, and I’m curious about how I will respond to it. I just haven’t worked those muscles yet.”

“It was a moment of clarity – and it’s probably an obvious concept to most people – but those who I observe are really good at innovation have almost uniformly been through a really significant personal disruption of their own. Whether on their own initiative, or by circumstances they didn’t choose.”

“Those people come to wrestle personally with how they respond to disruption, and have stripped away many of their fears of change. I wanted that same freedom.”

Mal believes he needs to be confident that he can lead himself well through change to have any right to help others. He anticipates that stepping out of his role will involve a time of decompression and reconstruction.

“I know it’s going to be uncomfortable. I’ll make more mistakes. But I’m pretty confident that it will be valuable and will make me a more effective leader.”

This idea is central to Mal’s experience. “Recognising the inevitability of change provided me with a clear choice – will I bring it on or run from it?”

“I’m a massive fan of Herbert Smith Freehills and the team I worked with, so it was a bit of a shock when I admitted to myself that I was getting a bit stale. I’m 45 and I looked ahead and thought, ‘I’ve got another 20-plus years of my career to go. Can I see myself doing the same thing?’ And I just couldn’t get energized by the idea. I couldn’t personally see a way that I could continue to keep the same learning curve, the same levels of engagement, continue to grow and contribute as I hoped to.”

“There were some people that helped me create a shift. The first was through a question I heard at our church. It was a New Year’s message about making choices.”

“The pastor said, ‘I cast myself forward and I ask, in five years’ time, what decision will I wish I had made back then?’”

That helped Mal face the decision to make room for something new with more confidence, recognising that it will take time to get traction on whatever that is.

“In five years’ time, I’m sure I will be glad that this decision is some distance behind me. I’ll hope not to be in that stage of uncertainty, wondering what is next. So that helped me bring forward the decision, rather than just kicking it further down the road.”

Like many corporate workers, Mal struggled to give time to the various priorities in his life, and had to take steps to ensure that he was properly honouring his relationships at home.

“It’s a challenge that every leader faces.”

“I knew there would be always more that I could do at the office, and I knew that some of my competitors were making a choice to remain at work longer to get their own metrics of success up, but I needed to be clear about my broader metrics of life success and not outsource them to someone else. “

“We often assume those choices will set us back professionally, but sometimes it actually gives us momentum. I found when I got clearer about my priorities, my time allocation got less stressful and I became more productive.”

Following on from Mal’s point about his pastor’s “five-year test”, we asked Mal where he’d like to be in five years’ time.

“I just don’t know, which is what’s fun. I know that sounds strange. The possibilities are so interesting, and I am giving them some room. Right now, I am thinking and reading on what makes relationships within and between organisations healthy. I look at this with a couple of decades of experience in commercial disputes. I am convinced that there is room to develop not just the theory of healthier organisational relationships, but to take practical steps to put them in place. I can’t help thinking that the trust deficit we are hearing so much about through the Royal Commission and elsewhere is an inevitable function of the way we design our commercial relationships.”

“I’m surrounded by clever people, including through my roles on the Shenton College board, and the Riverview Church board. Those relationships give me access to different perspectives, sectors, and governance experiences. I’m enjoying adding those skills and experiences to my kit bag, and learning from different people.”

“I get the “what next?” question a lot, and I always feel some pressure to answer with certainty, but for the time being I’m being playful with the opportunities that I can’t currently define.”

Mal has also been a Time for Justice Ambassador, which is a fundraising campaign run by International Justice Mission (IJM). They’re an organisation that addresses modern slavery, including trafficking of women and children for sex, particularly in Asia and Africa.

One of IJM’s fundraising endeavours in Australia is to engage lawyers and other professions to donate their charge out rate for just one hour. Mal supported them in this for a number of years, promoting the campaign.

“IJM has this great model where they seek to strengthen the justice mechanisms within developing countries through the building blocks necessary to prosecute – well drafted laws, and also working to build the capacity and will of law enforcement agencies to enforce.”

“It strikes me as a clever strategy. They also have people and structures to help the women and children recover safely after they are rescued.”

“We tend to assess our success as a society by what we can easily measure – GDP, rates of unemployment, real income. We don’t have great metrics for generosity or kindness, or for addressing systemic dysfunction.  I like it when those characteristics get celebrated in our community.”

“If we collectively prioritised those qualities and measured ourselves against them, we would shift the dial on some of the frustrations and inequalities and limitations that hold communities back.”

For Mal, key to moving our society forward is centred on wisdom.

“I think it never goes out of fashion, even though it’s not spoken about a lot.”

“It’s the capacity to wade through complexity and find simplicity, to move back from the immediate and see the underlying patterns that speak to those, rather than just to the symptoms. I wonder whether many of the debates of the day address only the symptoms without ever getting to the underlying questions confronting society.”

“We shout louder because we’re not feeling like we’re being heard, and we stop listening. Covey reminded us to seek to understand before panicking that we are not understood. We need to hear voices who speak rationally to the underlying values that we wish to orient ourselves by in our culture. Honestly speak to those issues and engage in respectful dialogue about them. I want to be around people who are up for that kind of discussion.”

Mal is a Leadership WA Alumni, and a graduate of the 2012 Signature Program. Mal credits the Program with embedding him with a habit of reflection.

“It’s now six years since I started the Signature program, and in that time I’ve seen many of my cohort continuing their leadership journey into really interesting spaces. Yesterday I had an email from the new CEO of a large not-for-profit. She was in my cohort, and was just introducing me to someone who she thought would be interesting for me to meet in this new stage.”

“That stuff just happens through the Alumni network because of the relationships that we’ve built, and because we know it is a team game.”

“One of the catch cries of Leadership WA is to ‘answer the call’. You’re always doing it for the benefit of someone else. You’re available to assist. I think that hints at the essence of leadership.”

For Mal the biggest opportunity now to grapple with, as he moves into this new stage of his life after 22 years with one organisation, is one of identity.

“How much is my identity tied up with being a partner of a global law firm? How much is my sense of value shaken when I subtract that title from my introduction at a cocktail party?”

“Many of us can fall into the trap of defining ourselves by reference to our title.  I’m going to get some good practice introducing myself to new people with, ‘I don’t have a current role’, and that’s okay. I’ve set myself a personal target of using the phrase ‘I used to be,’ as sparingly as possible – it’s just too boring! I am ready to speak to where I am, and what’s ahead.”