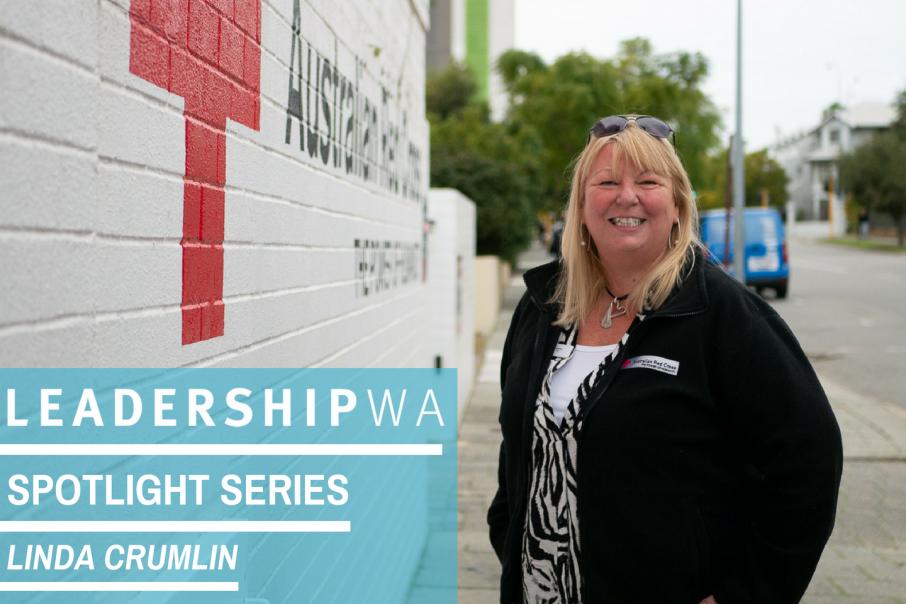 Linda Crumlin is the State Director of the Australian Red Cross in WA. She commenced her career as a nurse in the United Kingdom, before moving into the corporate world. She moved to WA in 2007.

From day one of her career, Linda Crumlin has been learning about leadership. Since training as a nurse in Scotland, she has learned skills on the hospital front line in highly stressful situations. Now, as the WA Director for the Australian Red Cross, she and her team work on the front line of complex community challenges, all of which need a steady and confident hand.

Given that Linda’s team must react to community events, it’s vital they are able to lead themselves when required.

“My goal is to make people accountable at all levels and to empower them to make decisions.”

By leading when required, but crucially allowing others to lead, Linda aims to encourage a cultural of ownership, not blame, and continuous improvement and learning.

“I strongly believe in empowerment and delegation of responsibility, not just delegating tasks. We need leaders at all points in the organisation and we need to have a culture that supports this. It is important for leaders to know when to lead and when to step back and let others take the role. You can then watch new leaders develop, get more enjoyment from their role, and build their confidence.”

“I often talk about the concept of ‘smart failures’. If we never fail at anything we are either not pushing the boundaries of what we can achieve, or we are not truly understanding what is occurring around us.”

“That is key to staying relevant in today’s everchanging world – being prepared to take risks, leadership at all points and the development of future leaders.”

The idea of ‘smart failures’ is key to Linda’s own personal leadership journey. By not being afraid to make mistakes, and making sure she learns from them, Linda has discovered this is where the best ‘nuggets of innovation’ can come from.

“My first leadership role was a very junior role in a medical company in the UK. I had come from within the team, so I felt that I had to prove that I knew everything quite quickly. Obviously, I didn't know everything. We shouldn't try to know everything.”

Linda is a graduate of Leadership WA’s Signature Program, completing the Program in 2009.

“The Signature Program was a great expansion on my knowledge of WA. I had only lived in Australia for 2 years when I did the program, and the regional visits increased my understanding of key issues in WA. The honesty of the leaders who talked about their successes and failures was wonderful and helped me see how they developed their learning and leadership.”

“I also met an awesome group of fellow participants and we still meet up as friends and peers. We are now an amazing supportive group.”

Linda has come to learn that the traits of good leadership aren’t specific to a particular role, industry, or even country.

The root of Linda’s leadership skills and journey comes from her first career – as a nurse for the NHS in the United Kingdom. Back then, Linda didn’t have her sights set on leading an organisation such as the Australian Red Cross.

But while leadership expertise is vital in the practice of nursing, Linda was never formally taught leadership skills.

“Nursing teaches you to be able to jump from one issue to another issue very quickly. You have to be able to respond, because you can be laughing with one patient in one bed, and then suddenly reviving or attempting to revive another patient in another bed within seconds. You have to pull together a team around you very quickly, direct your team, and support new staff who might be seeing this incident for the first time.”

“It gave me the ability to move from a stable situation or a nice chat with staff, to crisis mode.”

It’s this on-the-job leadership training that has given Linda the skills base to lead the WA Australian Red Cross in its tackling of complex community problems. On the morning of this interview, Linda had to lead a response to severe bushfires in the Albany region.

“We were just activated today with the Albany fires. We were notified that the fires were raging - we had to have a response team, and that's already up and running.”

The Albany bushfires are just one recent example of when the Red Cross has had to quickly coordinate a crisis response plan. In mid-May 2018, the Red Cross responded to the Osmington shooting, the worst mass shooting in Australia since the Port Arthur massacre of 1996.

While mass shootings are extremely rare in Australia, the Red Cross team approached the tragedy like they would any other traumatic event.

“What we need to understand is that the response to trauma is a normal response to an abnormal situation. The response is something that we practice and have experience in dealing with. That's where psychological first aid comes in, so we can actually understand how people are feeling.”

“We work with local community, local experts, and sometimes we bring in other experts. When I look at the fire that was down in Harvey-Waroona, we actually had a recovery officer down there working with the local community for about 18 months.”

But the challenge for Linda is not just coordinating a quick response to a tragedy; it’s also ensuring her team don’t suffer vicarious trauma and are able to sustain service levels without compromising their own mental health.

“When we put people in the field, first of all we train them really carefully in psychological first aid, trauma, and personal support. But, when you're on the field and you're listening to people’s stories, it can sometimes trigger something in your background that you thought you had dealt with. Or, the amount of stories can actually start to overwhelm you.”

“We need to be able to support staff in that instance, and we recognise that there is a risk there for all staff, no matter how well trained they are. We have a wellbeing officer who contacts all of our volunteers every day and checks in on them, makes sure that they're doing okay.”

When leading a team through a response to a traumatic event, it can be difficult to present as a strong leader without shutting out your team to your own emotions.

“It's a very blurred line.”

“I don't think leaders have to put a wall around themselves and not show that they are feeling it as well.”

"I think sometimes that softness, and saying, ‘You know what, this is tough guys, and we all need to pull together.’ Whereas if you are seriously affected by something, then you need to be able to recognise it, and you need good people around you that can support you in that way.”

While the majority of Linda’s experiences in difficult situations has been within her team and organisation, Linda has also had to face challenges outside of her day job. As the former Chair of the Board of Community West, she and her fellow Board members had to make the decision to wrap up the organisation.

“With the Board' expertise and the CEO’s input regarding the changes in the external environment, we had enough knowledge and vision to see this as a possibility. About 9 months before we took the decision, we sought legal advice from specialist not-for-profit lawyers. This allowed everyone a confidential space to understand the process and the key points in time that we would need to make decisions.”

“There was enough time and discussion for everyone to understand the issues and the risks. We were all aware of our legal and fiduciary responsibilities and we ensured that we stayed true to those. We developed a high-level plan with key dates and responsibilities. We continued to take advice from the lawyers we had engaged. It’s important to have expert advice when navigating a change such as this.”

A crucial step in this process was working closely with the CEO of the organisation and supporting her through the changes.

“The CEO and myself met with the teams to explain the decision and rational. The staff were great. Although some where upset and disappointed, I am really pleased to say that they all stayed with us till the end date. They were amazingly resilient and professional. The change management plan delivered by the CEO was the foundation for the team’s behaviour and commitment till the final day.”

Like Community West was, the Australian Red Cross is a not-for-profit. While redundancies and funding reductions are possibilities in any industry, Linda believes that staff can be harder hit in the not-for-profit sector.

“People are here because they want to help people with vulnerabilities. Whether the funding's there or not, people with vulnerabilities are still there, so the need is still there. When we're changing programs, reducing programs, reducing supporting when funding shifts or changes, the needs haven't changed on the ground, so staff feel it in two ways. They might be saying cheerio to a colleague who we're losing because the funding has ended, but they're also be really concerned for the clients who may not get the same support going forward.”

“I think in for-profit world you might think about yourself first. I wouldn't like to say that for everyone, but I think that would be the response: me and my team. In a non-profit it would be my clients first, and then my team, then me.”

As a final question, we asked Linda what she would change about leadership in WA if she had a magic wand.