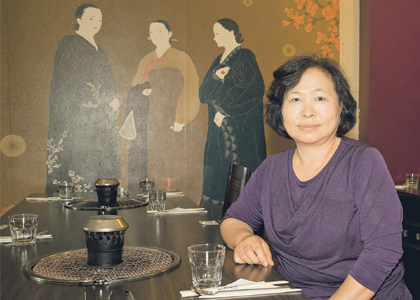 EVERY evening, just off Leach Highway in Myaree, a strip of restaurants begins preparing for another night of trade.

And while the row of restaurants on Hulme Court covers just 100 metres, there’s a great spread of nationalities and cuisines represented.

Julia Seunghee Lee took over Cora in 2010, merging a lifelong passion for hospitality with the training she received in South Korea more than 20 years ago.

Mrs Lee, her husband and their three children moved to Australia in the early 1990s, attracted by the education system and the business opportunities that her husband, an engineer by training, saw in the growing economy.

“In Korea the education system is extremely stressful on students, and we were looking for the best system to educate our children in,” Mrs Lee says.

In additional to her hospitality studies, Mrs Lee, a talented classical piano player, also ran her own music tutoring business in South Korea, and continued to teach students while her children were growing up.

The decision to start a restaurant came soon after her youngest child was close to completing university. Mrs Lee told Gusto the early days were stressful as the restaurant struggled for recognition among its more established neighbours.

“When we bought the restaurant we didn’t have anywhere near enough customers because no-one knew we existed,” Mrs Lee says.

It wasn’t long, however, until the smoky aroma of barbecued meat started to turn heads on the strip. This, in combination with a series of good reviews, has worked to create a solid nightly trade for Cora.

“Since the good reviews, and putting the business on Google Maps we’ve been building a solid customer base that’s been growing every year,” Mrs Lee told Gusto.

“Most of our customers are Asian, but every year we’ve noticed a more diverse range of people starting to come in.”

“In general, Australians go for more of the fried noodles and pre-prepared options, although return customers will always prefer the barbecue.”

While almost all restaurateurs will say good, prompt service is essential to running a successful business, at Cora the need to keep the buffet brimming and replacing every table’s grill regularly makes the challenge all the more difficult.

Cora is one of the only Korean barbecue restaurants in Perth to use the charcoal, and Mrs Lee says this gives it an edge.

“Compared with using gas, the charcoal gives the meat a far better flavour,” she says.

All of the furniture and special equipment in the restaurant was imported from South Korea, with diners seated around grills built into the middle of tables.

“This style of dining is really popular in Korea, it’s how many people like to eat, and they tend to stuff themselves,” Mrs Lee says.

Some of the options may seem intimidating for first-time diners (think giblets and tongue cuts), however the buffet has a number of more conventional options such as prawns, marinated chicken, squid, pork belly and marinated beef.

Traditionally, after meat has been cooked, it is wrapped in lettuce along with kimchi and condiments.

Also on offer are entree items such as sushi, fried rice and noodle dishes, as well as a few sweeter items for after the meal. Korean beer and rice wine complement the meal as well.