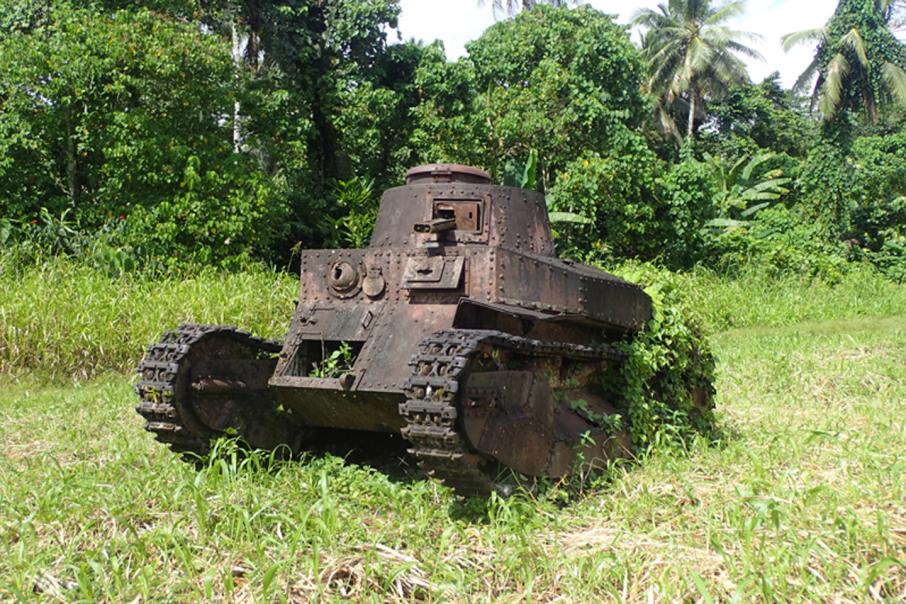 A Japanese World War 2 tank on Bougainville Island, where more recently a 10-year civil war brought mining to a halt. An agreement signed between landowners and Kalia Ltd has demonstrated the locals' hunger for revived mining activities.

Kalia gets keys to Bougainville with signing of agreement

The people of Bougainville have demonstrated their hunger for reviving their local mining industry after decades of being trapped in a mining moratorium. Local landowners have signed a Land Access Agreement with ASX-listed Kalia Ltd that will pave the way for a full copper-gold exploration programme on the island.

In a market update this week Kalia said the exploration and land access agreement was signed with the Toremana Resources Owners Association, which represents the seven major clans in the northern part of Bougainville where Kalia holds two key exploration licences.

Perth-headquartered Kalia also said that Nick Burn has resigned as an Executive Director of the company and Peter Batten, the company’s in-country geologist has been appointed Technical Director.  Mr Burn will remain with the company but will now focus on the development of Kalia’s Australian assets.

The signing of the historic agreement this week opens an exciting new chapter for mineral rich Bougainville, which saw its riches turn to rags during a 10-year civil war ending in 1998.  The war brought all existing mining on the island to a rapid halt and, until recently, all serious exploration on the island was also frozen.

However, recognising the potential for a mining revival, Perth mining entrepreneur Nik Zuks and Kalia Ltd Managing Director Terry Larkan have been assisting local land owners with the finer nuances of the new Bougainville Mining Act brought to bear by the new autonomous President of Bougainville, John Momis. The new act vests all mineral rights below ground to customary land holders, which means any company seeking to mine on Bougainville must first reach an agreement with the locals.

Zuks’ and Larkan’s vision came to be this week with the signing of the historic agreement that consolidates Kalia’s first-mover advantage on the mineral rich island. Kalia will now open up the throttle on a no holds barred exploration program aimed at returning Bougainville to its former status as a leading mining precinct best demonstrated by the world-class Panguna copper-gold mine - the focal point of the civil war.

Kalia’s vision was given added clarity last month when the company revealed that reworked data from a 1986 geophysical survey had revealed anomalies similar to some of the world’s biggest copper mines, notably Freeport’s Grasberg and Newport’s Bata Hijau mines in Indonesia.

The airborne geophysics covered only 20% of Kalia’s new licence areas with most of Bougainville Island remaining unexplored.

The in-country task of sleuthing out economic ore bodies in the north of the island will now fall to Peter Batten who has 35-years of experience as a geologist, mine manager and consultant with exploration activities associated with nickel, gold, graphite, uranium and iron projects.

David Johnston, Chairman of Kalia, said: “The Company is in the process of reviewing its directorships, specifically non-executive roles. However, the importance of having Peter in place as the Technical Director, providing focus and a direct channel from the boardroom table to the work on the ground in Bougainville, has resulted in this change ahead of further appointments.”

“Our stated aim is to identify drilling targets and to start drilling activities on our highly-prospective licence areas on Bougainville in 2018. Peter will be responsible for escalating operations from the early on ground exploration activities, started in the first quarter of 2017, into the full-scale exploration programme now that we have concluded the Land Access Agreement with the landowners.”

“Peter has played an important role in getting us to this stage in Bougainville and is known by the communities in our area of operation. Our JV partner, Toremana Resources, and the landowner organisation, Toremana Resources Owners Association, are supportive of Peter’s appointment and his role in the exploration activities.”

“We look forward to announcing the results of exploration work as these become available.”