A local tech startup is planning to be the next big thing in social media. 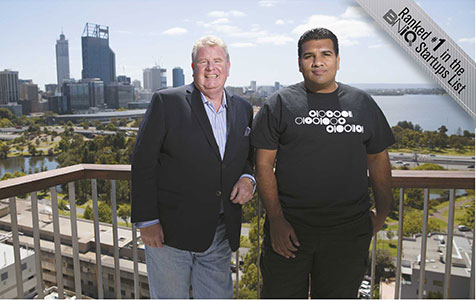 A local tech startup is planning to be the next big thing in social media.

Less than a year after its launch, Perth tech startup Saybubble is attracting the interest of some renowned heavy hitters, which founder Jerome Naidoo believes already places it in elite company and speaks volumes for its potential.

As revealed to Business News, the fledgling business has secured its first key investor in Silicon Valley stalwart Larry Lopez, who is also joining the board.

Mr Lopez brings with him 20 years of ‘valley’ experience and the contacts that come with that, having formerly held the position of president of private banking at Silicon Valley Bank.

“It’s great to have Larry on board,” Mr Naidoo told Business News. “He has a wealth of experience in the startup industry and has some really valuable Silicon Valley relationships.”

This is an interesting move for Mr Lopez, who as partner at Perth-based Australian Venture Consultants is contacted regularly by local startup hopefuls keen to get him involved in their projects; he has to turn most of them down.

“I see hundreds of startups, including a lot of very good ones,” Mr Lopez told Business News. “Unfortunately we just don’t have the bandwidth to work with most of the companies we meet, so we are very particular and rarely take on new opportunities.”

Saybubble is a city-based news platform that enables users to find out what’s happening in different parts of the world, from the perspective of a local. What this means is, unlike on Facebook or other sites, users post their news to a city rather just to a general news feed for their own contacts. Instantly, people seeking news from home or a place they are about to visit can see what the locals are saying in real time.

For example, at present, on the London newsfeed there is a lot of talk about the darker evenings and encroaching winter, while over in Los Angeles the chatter has been about Thanksgiving and a new fuel-cell vehicle.

“Saybubble has two things I really like,” Mr Lopez said. “The concept is a fresh approach to social networking and the founder is impressive, in that he has a vision, listens to new ideas and is willing to make sacrifices to execute.

“If the company can get traction with users, it has the potential to be a great add-on to existing players in the market.”

A computer science graduate, Mr Naidoo has established two IT companies, one of which currently has 60 employees. He then went onto to invent a new building material called ‘R9’ before becoming a CEO of a solar power business. With the creation of Saybubble he has now transitioned back to IT.

Currently, the Saybubble website has 138 cities listed and each has a newsfeed that users can contribute to, or follow. The first version of the site went live a few weeks ago and more than 2,000 users have registered. Just as in Facebook’s case, the first drive for users started at universities, in Western Australia and then interstate.

The site’s not planning to make money, at least not in the short term. The site is free for users and there are no advertisements. In time, the company plans to develop a business model in which businesses are connected with local charities.

In this way, Saybubble is following a new route forged by ad-free sites such as Ello, which launched in March this year and already has more than 1 million users. Ello’s intention is never to sell user data to advertisers, never show advertisements and never enforce a real-name policy – the three main bugbears that Facebook users have been complaining about for years.

Since meeting Mr Lopez, Mr Naidoo and his team have been over to California to meet potential investors, including Silicon Valley Bank’s Jim Marshall.

“Jim loved the idea and has agreed to give us co-working office space in San Francisco,” Mr Naidoo said.

“We are relocating there in the New Year and we’re really looking forward to becoming part of the tech scene in the valley.”

Mr Lopez said the Perth (tech) community was really starting to gel in terms of an ecosystem for startups, although for many companies the real upside may require spending more time outside of this market.

A more formal Saybubble launch is expected in the New Year, as the team aim to close its first significant funding round.