It’s all happening in the ’burbs

With limited construction under way in the CBD and West Perth, commercial tenants are looking to the suburbs for new office space. 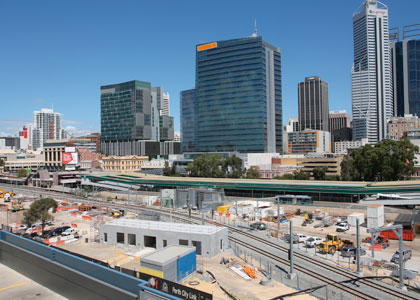 STALLED: Building construction levels in the CBD have slowed this year, with activity pushed out into surrounding suburbs and beyond. Photo: Bohdan Warchomij

With limited construction under way in the CBD and West Perth, commercial tenants are looking to the suburbs for new office space.

A SLOWDOWN in the resources sector has pushed vacancies higher in the Perth CBD and West Perth office markets, but the strong performance of Western Australia’s suburban office market is set to continue.

More than 117,000 square metres of space across 38 projects are currently under construction in the suburbs, according to the Y Research February Suburban Office Report. A further 270,000sqm across 47 projects is proposed.

Y Research principal Damian Stone said the suburban market had proved resilient to the increase in CBD and West Perth vacancies, with rents in the suburbs remaining well below those in the city.

“Subiaco, out of all the markets, seems to be the only one of the suburbs that’s tied into what happened in the city and West Perth.

“Because of that proximity, because it’s literally just over the road, its vacancy rate went up and rent still went up. It’s the continual flow-on effect, whereas in the next two biggest suburbs, Herdsman and Northbridge, vacancies are down but rent’s very static.”

The suburban vacancy rate remains unchanged from August 2012 at 9.7 per cent, with strong net absorption of the 37,000sqm in supply added in the six months to February. The vacancy rate was at 11.4 per cent at the same time last year.

Demand is particularly strong in the suburbs for A-grade space, with the vacancy rate at just 3.5 per cent, although the majority of the supply under construction will meet this criterion. Less than 10,000sqm of A-grade space is currently available, the largest portion of which is 1,960sqm.

In contrast, the Property Council of Australia’s latest office market report found there was a modest increase in the CBD vacancy rate, from 4.2 per cent in the second half of 2012 to 5.7 per cent.

The vacancy rate also increased in the West Perth market, jumping from 3.3 per cent to 4.5 per cent.

Net absorption was particularly weak, with Perth the only major capital city market to record net negative demand. However, Perth’s CBD vacancy rate remained well below that of any other capital city in the nation.

“Demand for office accommodation in Perth in the last six months was the weakest since 2009; however this was not surprising following record demand for office space since then.”

More than 173,000sqm of CBD office space was completed in 2012, with Brookfield Place and Bankwest Place together accounting for two-thirds of the additional space.

It is expected that just one CBD development will be completed this year - a 2,350sqm office building at 1006 Hay Street. More than 33,000sqm is under construction, including the Old Treasury building redevelopment, with pre-commitments sought for an additional 253,000sqm of CBD office space.

While state government departments are set to lead a push into the suburban office market in the coming years, Mr Stone said the growth recorded over the past six months had been mostly organic.

“In the last six months we haven’t seen any major moves from the city out to the suburbs,” he said.

“This is what’s really interesting about this number ... that’s independent of anything that happens in the city. If you can bring new people out of the city, out of West Perth, that adds to this strong growth that’s already there.”

Areas close to the CBD with strong transport links remained the best performers among the suburban markets, Mr Stone said. Mount Pleasant, Murdoch, Wembley and Herdsman all recorded vacancy rates of less than 3 per cent.

With a vacancy rate ofjust 1.3 per cent, Perth Airport’s business precinct is the strongest performing office market. Construction is under way on Roy Hill’s remote operations centre and corporate headquarters in the precinct and is likely to be completed by December.

Armadale was the worst performing suburban office market with a vacancy rate of 61 per cent, followed by Mirrabooka, Welshpool and Rivervale.

While its close proximity to the CBD means it is not to be considered a ‘suburban’ development by most, Charter Hall’s 28,000sqm WorkZone development at 202 Pier Street in Northbridge is set to become one of the biggest office complexes in WA upon completion. Leighton Contractors has pre-committed to 21,000sqm of the complex for its new head office.

Another major development in the suburbs is Buxton Holdings’ 15,000sqm complex at 20 Walters Drive, Herdsman. Construction commenced on the project in December last year without a lease pre-commitment, which CBRE senior director Andrew Denny described as reflecting a “vote of confidence in the Perth office market”.