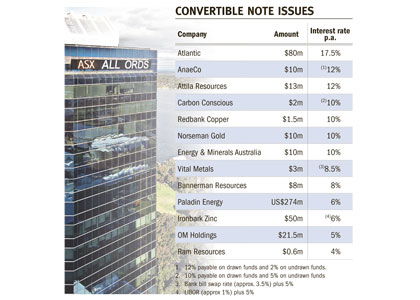 WHILE many miners and brokers were in Kalgoorlie this week, spruiking their business at Diggers & Dealers, the reality of the tough market was best illustrated by the growing number of companies resorting to high-interest financing options.

Convertible notes have always been part of the financing armoury, but their use is on the rise as equity markets have tightened.

In the past fortnight, Perth-based companies Atlantic, Redbank Copper, and Carbon Conscious have all announced new convertible note facilities, with interest rates ranging from 10 per cent to 17.5 per cent.

With banks advertising business overdrafts at about 8.7 per cent, the convertible notes are clearly an expensive funding option.

But for many businesses they are the only option currently available.

Junior explorers and mine developers mostly don’t pass muster with the banks, and the squeeze in equity markets is illustrated by the fate of two recent capital raisings.

Anatolia Minerals raised $4.4 million through a placement but the take-up of its $1.1 million rights issue was only 7.5 per cent, before underwriting kicked in.

Water Resources Group did slightly better but still had a take-up of only 15.8 per cent from its $5.6 million rights issue, before commitments for shortfall shares.

Another option is to ‘batten down the hatches’ and preserve cash, like Avonlea Minerals.

Last Friday, its chairman David Macoboy resigned from the board, its managing director David Riekie moved to a non-executive role and the company reduced its exploration activities in order to conserve cash.

However for companies with a project to build, issuing convertible notes is often the best bet.

Atlantic, which is commissioning its Windimurra vanadium project, this week lined up a $50 million convertible bond facility, following a similar $30 million deal in March.

The bonds will be subscribed by its major shareholder, Droxford International, with interest payable at 17.5 per cent per annum.

If Atlantic subsidiary Midwest Vanadium is unable to provide security, the interest rate will jump even higher to 22.5 per cent.

The new bonds are convertible into ordinary shares at 50 cents per share, a 5 per cent premium to Atlantic’s market price.

The March bonds were convertible at 97 cents per share, but that has been reset to 50 cents, reflecting the fall in Atlantic’s share price.

Issuers of convertible bonds normally aim to redeem them for cash, but in practice they may be converted into ordinary sales, diluting the equity stake of other shareholders.

Its major backer and director, Ian Campbell, lifted his stake in the company to 25.1 per cent after converting $2.18 million of loan notes, and a $500,000 loan establishment fee, into ordinary equity. The upside for AnaeCo is that the company will not have to pay interest on the notes – set at 12 per cent of drawn funds.

The loan-for-equity conversion was the second time AnaeCo shareholders have been diluted in the past month.

Engineering contractor Monadelphous was awarded 44 million shares as payment for $2 million worth of work on AnaeCo’s innovative waste treatment plant at Shenton Park.

That was equal to 9.9 per cent of the issued capital at the time; it is now equivalent to 8.9 per cent.

Gresham Advisory Partners managing director Justin Mannolini said in his experience there was not a particularly good level of understanding among boards regarding the true cost of convertible bonds and notes.

“Boards frequently fail to properly evaluate the ‘option’ element inherent in a convertible bond or note, and focus exclusively on the conversion price (premium to market) and/or coupon,” he said.

“The coupon in particular can be a relatively small contributor to the overall cost of capital under a convertible instrument relative to the conversion terms and other rights.”

Ram is planning to issue $600,000 of convertible notes with an unusually low interest rate of 4 per cent; the upside for investors is that the conversion price will be the lower of 0.2 cents or 85 per cent of the market price.

In some cases, interim financing becomes a long-term outcome.

In December last year, it refinanced most of the notes with a new, two-year $8 million convertible note.

Mr Mannolini said terms and practice varied widely, depending on market conditions, the objectives of the issuer, and their financial condition and prospects.

“In short, there is little standardisation and hence it is difficult to compare different instruments,” he said.

Recent issuers include Redbank Copper, which is negotiating a complex restructuring with Balcatta investment group Investmet.

As the restructure has been delayed, Redbank has agreed to issue up to $1.5 million of convertible loan notes to Investmet. The notes have a 10 per cent coupon and expire at the end of the year.

Carbon Conscious is planning to issue up to $2 million of convertible notes, with the same coupon rate of 10 per cent per annum.

In addition it will pay a commitment fee of 5 per cent per annum on any undrawn notes.

Like Ram, investors in these notes will also benefit from generous conversion terms – the lower of 20 cents per share or 90 per cent of the market price.