The petroleum industry and environmental activists may have clashed this week but they are both heading in the same direction on emissions reduction. 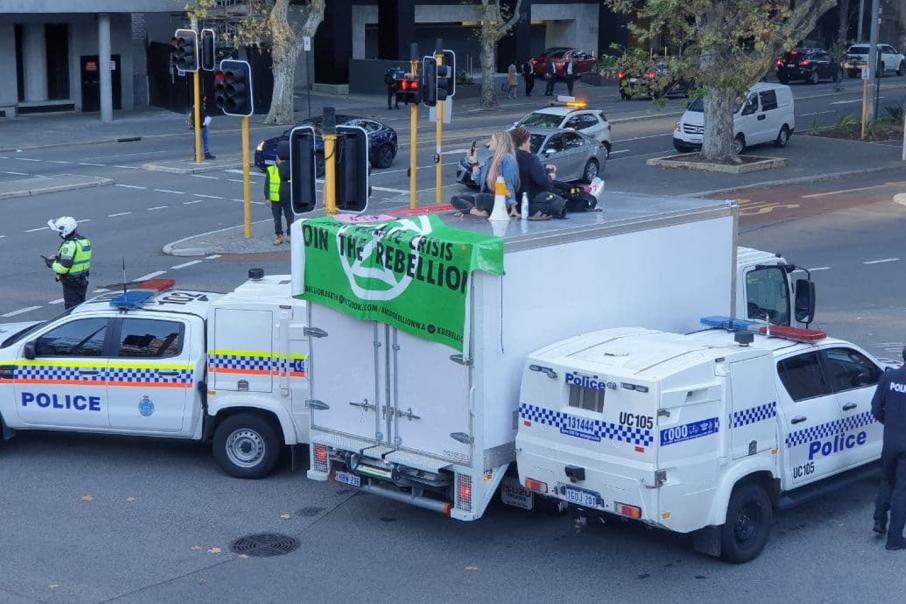 The petroleum industry and environmental activists may have clashed this week but they are both heading in the same direction on emissions reduction.

Extinction Rebellion activists blocked the vehicle entry to the Perth Convention and Exhibition Centre with a truck on Thursday morning, as part of their ongoing campaign against carbon emissions.

Two were arrested, the group has said, after blocking the vehicle entry for three hours during the Australian Petroleum Production and Exploration Association conference.

The activist group was protesting Woodside's planned $US 11 billion Scarbrough to Pluto LNG development, with a final investment decision looming by the end of the year.

“New oil and gas developments are not compatible with a safe future,” the group said on social media.

“Corrupt politicians and fossil fuel executives are actively planning to create more emissions and endanger all of us.”

But inside, BHP had sponsored a morning session on the energy transition, while Wood Mackenzie was releasing a report about the economic potential of low-carbon hydrogen for Australia.

Santos chief executive Kevin Gallagher spoke on Tuesday about the potential for carbon capture to support a low carbon hydrogen industry a decade ahead of other countries.

Existing pipeline and offshore infrastructure could be used to store captured carbon in reservoirs previously depleted of natural gas, he said.

On a similiar theme, APPEA chief executive Andrew McConville used his closing speech to argue it was the oil and gas industry investing in cutting emissions, not protestors.

“By 2030, our industry has the opportunity and indeed the obligation, to be leaders in large scale hydrogen and CCS development,” he said.

“We know natural gas is a pathway to a large-scale hydrogen industry.

“I would argue we are the most sensible pathway.

“Our LNG export success means the Australian upstream oil and gas industry has the technology, expertise, commercial and trade relationships to make hydrogen exports a reality.”

Turning off the tap too quickly will mean losing market share to other countries, a key thread of Mr Gallagher's keynote speech to open the conference.

More than 60 million tonnes of annual LNG capacity was sanctioned by Russia and Qatar in recent months, he said.

But a lack of action risks economic consequences, too.

The European Union and United States have both made moves towards a carbon border tax, which would collect revenue from goods exported by countries with poor emissions standards.

A rapid transition away from carbon emissions in Australia’s trade partners, particularly China or Japan, could leave the oil and gas industry with much lower demand, and potentially, huge assets that can not be used to capacity.

The value of that sunk capital would be lost to society, or as ESG investors put it, the assets could be stranded.

The Conservation Council of WA and Australia Institute published a report last week projecting the Scarborough LNG development would result in 1.7 billion tonnes of carbon emissions over the project’s life.

That followed a report by the International Energy Agency which said no new oil and gas fields would be needed beyond what is already committed, under a pathway it modelled for net zero emissions by 2050.

Even under that pathway, there’s still demand for gas, although LNG use will be 60 per cent lower than now.

Australia will still be shipping LNG by 2050, at a dramatically lower rate than now, the report said.

However, market share will be lost to the Organization of the Petroleum Exporting Countries, where production is government-controlled, it projected.

In other modelling scenarios including pledges by countries already announced, gas use increases by 2050.

In CCWA’s analysis, direct pollution from Scarborough and Pluto Train 2 was estimated to be 4.4 million tonnes per year.

Far larger would be the scope 3 emission impact, which it said would be 1.6 billion tonnes over the project’s life.

There are other factors to consider, however.

Woodside has already said it is aiming to have net zero emissions by 2050, and is investigating use of its depleted reservoirs off the state’s coast to store  carbon, previously flagging capacity of about 7 billion tonnes.

It’s also possible countries importing the LNG may use it to firm up renewables and retire coal generation.

Japan is already the biggest buyer of WA LNG and could provide a case in point.

In April, S&P reported Japan planned to cut its use of coal by 5 percentage points to 26 per cent of its energy mix by 2031.

At that point, gas will provide slightly more of the country’s electricity than coal.

In the five years ahead, a net 2.7 gigawatts of gas power capacity will be installed in Japan, S&P said.

So the net emissions impact of the projection is unclear.

One thing that is clear is that Japan, and South Korea both have net zero targets for 2050, with China’s aim to be net zero 10 years later.

That means they have promised to set their own pathways to get emissions under control, reducing the significance of the Scarborough decision when it comes to emissions impact

If demand for Scarborough gas evaporates, an alternative option would be to use the natural gas for hydrogen production, with carbon capture to reduce emissions.

That would be either a step towards, or a competitor to, green hydrogen, which is produced by running renewable power through an electrolyser in water.

Wood Mackenzie estimated low-carbon hydrogen could be worth between $US 50 billion and $US 90 billion to Australia in 2050.

“We estimate ammonia would be the first hydrogen-carrier in the export market facilitated by Australia from mid-2020s.

“Low-carbon hydrogen demand in Japan and Korea reaches 30mt in 2050 with ammonia taking one-third market share on this route.”

“This is a lifetime opportunity for Australia to harness its renewable energy resources and become a dominant player in the zero-carbon energy trade,” Mr Sharma said.

“It would be difficult for large Asian economies to reach climate goals without clean energy supplies from Australia.”