Optimism is emerging in Perth’s office market, but that doesn’t mean landlords’ challenges are over. 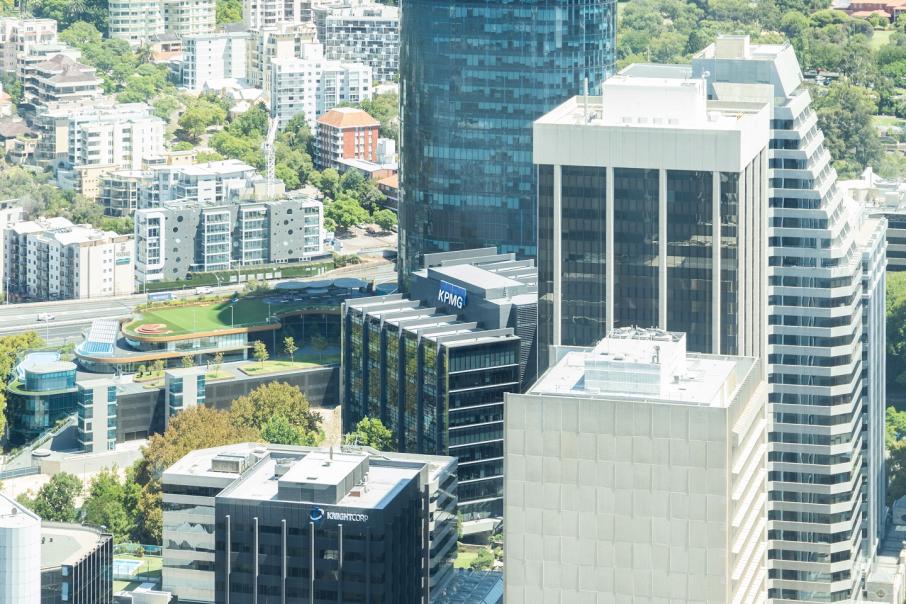 Optimism is emerging in Perth’s office market, but that doesn’t mean landlords’ challenges are over.

Conditions in Perth’s CBD office market have improved significantly over the past six months, but the availability of vacant space in older buildings and persistently high rents are expected to delay any prospects of significant rental growth.

The Property Council of Australia said Perth’s overall CBD vacancy rate had declined slightly to 18.4 per cent in the six months to July 2019, a marginal improvement on the previous six months where vacancies were 18.5 per cent.

The Property Council said options were getting increasingly tight in premium office buildings, with vacancies plunging from 8.1 per cent in July last year to 3.8 per cent currently.

The figures indicate a clear disparity is emerging in Perth’s office market, with vacancy largely concentrated in lower grade assets.

To gauge landlords’ sentiment, Mr Bhimjiani said he had created his own version of prominent economist Arthur Okun’s ‘Misery Index’, which was an analysis of inflation and unemployment rates to create a measure of how average citizens were travelling economically.

Mr Bhimjiani’s office misery index examined the relationship between vacancy rates and incentives, which are typically contributions to office fitouts or rent-free periods offered to secure tenants on a long-term deal.

“At the moment, we have a situation where, despite the optimism currently in the market and a reduction in the vacancy rate and strong net absorption in the market, things are not that easy,” Mr Bhimjiani said.

“It is still quite difficult to get a tenant to lease a typical 500 square metre lease, because there are so many options for them. So things are still quite hard.

“In 2019 the level of landlord sentiment is comparable with the early 1990s, when Australia was actually in a recession.

“That’s something to be mindful of; although things are improving, it is still very tough out there.”

He said a look at historical figures indicated vacancy rates and incentives typically moved in sync.

However, that was not the case in Perth’s current market.

“However, things have not panned out that way in the past few years.

“Incentives are still quite high; we are monitoring prime incentives at 47.5 per cent, and overall incentives in the market at 53 per cent, but vacancy is actually coming off. We’ve seen a reduction in vacancy since mid 2017.

“Essentially there will be a scenario where incentives will have to fall and play catchup with the vacancy rate.”

Squire Patton Boggs partner Mary Pringle, who represents both tenants and landlords through leasing negotiations, said the level of incentives on offer had resulted in some office occupiers getting stuck with unforeseen imposts.

She said while a lot of tenants had shifted to lower rents and better buildings, the costs of exiting their previous accommodation was not always something they had assessed.

“A lot of leases we are dealing with, for landlords and tenants, is they are old leases, they are not the current leases where tenants are essentially just picking up and leaving tenancies clean and tidy.

“There’s a lot of work to be done. The problem is a lot of those leases are very old leases, they go back over time, and there could be quite a convoluted history about their tenancy in a building.

“Landlords and tenants, when they are looking at a particular tenancy at the same time they are negotiating their new deal, they should be looking at what the cost is, especially when you are dealing with a tenant that’s testing their current landlord and looking to move.

“Both parties should be checking what the exit cost is. It can be highly litigious, (and) leases can be difficult to interpret

“We are finding that often causes a lot of grief, because tenants realise they can’t just negotiate a cash payout, so they need to manage their exit strategy quite carefully.”

Urbis director Richard Gibbs said current market conditions in Perth had resulted in an unprecedented number of building upgrades and refurbishment works across the city, a trend that had been mirrored across Australia’s major office markets.

“What distinguishes the Perth market is that it is probably the most demarcated in terms of grades of office space,” Mr Gibbs said at the Property Council’s event.

“That’s probably due to the fact that there has been an absence of internal competition.

“What we’ve noticed in Sydney and Melbourne as the refurbs have come online, that’s intensified competition, and it’s meant that landlords have had to be on their game in terms of keeping their properties up to standard in terms of the amenities that they offer.”

“For B- and C-grade assets, things like carpets, ceiling tiles, lighting, lift lobby areas, a refresh of the end of trip, it doesn’t need to be state of the art, but to lease your B-grade assets you need to have a good product in this market, it’s tough out there,” she said.

Ms Hutchinson, who also appeared at the Property Council breakfast, said landlords that focused on increasing the amenity of their buildings, no matter which grade, were setting themselves up for leasing success.

“Quadrant is a prime example; we purchased that asset with 64 per cent vacancy coming up and I think the first thing as a leasing strategy, Sheffield Property and I sat down and we said ‘we need a cafe operator that is active, vibrant and brings atmosphere into the lobby area’,” Ms Hutchinson said.

“Vibrancy is really important in that lift lobby area and that will come down to the cafe operator that you have within your asset.

“Owner-occupiers are always fantastic, they care about that business, they want to chat with every tenant that is coming down there for their morning coffee.

“But retail may not be the answer for every asset.

“It’s something that needs to be extremely thought through because retail is struggling throughout Perth CBD.

Appearing on the Office Hours podcast, part of the Business News podcast network, Knight Frank director of office leasing Greg McAlpine said tenant attraction initiatives needed to be assessed on a case-by-case basis, with particular thought given to the location an office asset was in.

Mr McAlpine said not every older building struggling with high vacancy necessarily needed to be brought up to A-grade or premium standard, but rather needed to be a quality offering in the market segment they were in.

However, he expected vacancies in some building classes would remain high, simply because not all landlords had the financial capacity to undergo significant upgrades.

“Some of these buildings are becoming obsolete and are coming to the end of their economic life,” Mr McAlpine said.

“It’s about looking at a building’s highest and best use, and if it isn’t commercial you’d look at retail, but the retail sector is flat, or it might be residential, but that’s flat.

“Unfortunately a lot of these buildings will suffer from vacancy for a long time simply because owners don’t have the capital to inject into them, so it does become a challenge of trying to rent them out for as cheap as possible.

“Our advice always would be to try and bring yourself up to the higher run in whatever grade of property you’re in.”