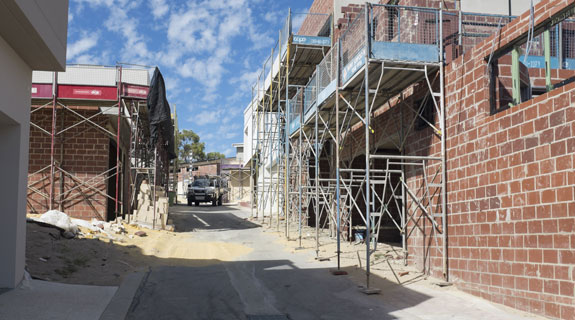 New home sales in Western Australia continued to decline in February, falling to a level 14.3 per cent lower than the five-year peak recorded in October last year.

The Housing Industry Association said private detached house sales were down 2.9 per cent last month, following a 4 per cent fall in January.

Home approvals are also on the downswing, declining by 4.2 per cent in January, according to the Australian Bureau of Statistics.

The HIA said the figures indicated a slowing trend in the housing construction market.

However, HIA chief economist Harley Dale said the slowdown in activity presented the opportunity for supply to catch up with demand.

“The headwinds in facing the state are widely and frequently reported on,” Mr Dale said.

“The silver lining to the situation, however, is that there are now opportunities for the WA economy to rebalance and diversify.

“Correctly matching housing supply will be a key part in that process of diversification.

“Last year’s announcement by the state government to streamline the approval process for new home building – the Instant Start process – should be a key support to the industry in delivering on that much needed housing supply.”

Nationally, new home sales were up by 1.1 per cent in the month, reaching a new cyclical high.

The rise was driven by an 11.1 per cent increase in multi-unit sales, while detached house transactions fell by 1.3 per cent.

The HIA said the figures represented more evidence of a changing composition of new home building.

“The signal from both HIA new home sales and ABS building approvals is for further upward momentum to multi-unit dwelling construction in 2015, but a consolidation in detached house building at volumes above the long-term average,” Mr Dale said.

“New home building conditions vary greatly around the country once you dig below the national surface, as is the case with residential property prices.

“The modest growth in new house sales in Queensland and Victoria is not enough to offset these declines.”