FEATURE: Industrial uncertainty and an urgent need for more infrastructure are putting the squeeze on iron ore exports through Port Hedland, while productivity increases and transshipment options are also being mulled over statewide. 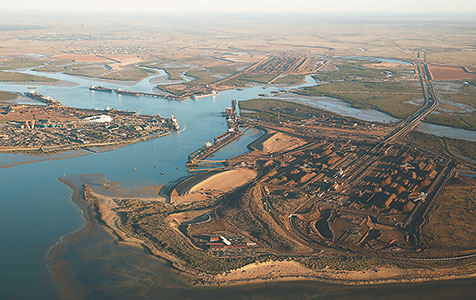 BIG NUMBERS: Exports worth about $100 million a day depart from Port Hedland, making it a vital cog in the economy. Photo: Hugh Brown

Almost 30 per cent of the world’s seaborne iron ore is expected to sail from Port Hedland this year, up from 20 per cent a few years ago.

With exports worth about $100 million a day, the port is a vital cog in Western Australia’s (and the nation’s) economy.

Recent threatened strike action has drawn attention to the heavily utilised port, which is preparing to get much busier.

The Pilbara Ports Authority says Port Hedland port currently has a total capacity of 495 million tonnes per annum. This is in sharp contrast to calculations by miners such as Fortescue Metals Group, however.

FMG chief executive Nev Power has previously said he believes the port’s true capacity is between 600mtpa and 700mtpa.

Whatever the final number, forecasts all point to dramatic growth in exports through Port Hedland.

Expansions at BHP Billiton and FMG are expected to make up 425mtpa of exports within the next few years.

Once Roy Hill is up and running it can access its 55mtpa allocation.

Junior miner Atlas Iron and its joint venture partner Brockman Mining also have the rights to develop berths through their joint venture North West Infrastructure (NWI), which has 50mtpa allocated.

WA’s largest iron ore miner, Rio Tinto, does not use Port Hedland, instead exporting out of Cape Lambert and Dampier ports.

Besides allocations, which are decided by confidential commercial arrangements between the PPA and miners, exports are constricted by changing tides, the depth of the channel, shipping and berth infrastructure, and natural geography (see map).

Between 2010 and 2014, port improvements allowed for an average 27.5 per cent annual growth in throughput.

On average, 16 giant cargo ships – known as capesize vessels – now move into and out of the port daily.

The ships’ maximum draft (depth of the ship in the water) of 19.65 metres means the PPA has to wait for regular seven-metre tides to safely move ships through the port.

At low tide the channel has a depth of just 14.7 metres.

Capesize vessels are usually 300 metres in length, while the channel is just 183 metres wide at its narrowest point.

The PPA provides capacity through a class system under which BHP Billiton has 240mtpa, FMG 120mtpa and Roy Hill 55mpta guaranteed under what’s known as A and B-class allocations.

BHP Billiton and FMG, which last financial year exported amounts just short of their A and B-class allocations, will have to rely on D-class arrangements once their production ramps up to 270 and 155mtpa targets respectively.

D-class shipping rights are offered opportunistically and can only be taken up if there’s time and space for them following A, B and C-class priorities.

There is a space for two proposed berths with 50mtpa capacity that NWI or junior miners could take up, but a lack of space means major expansion opportunities have been flagged for the outer harbour.

These expansions remain in early planning stages, however.

The PPA has outlined plans to develop a 400mtpa multi-user outer harbour facility off Finucane Island, likely to be funded in a user-pays arrangement.

Most of the iron ore that leaves the state is high-quality hematite, also known as direct shipping ore (DSO).

Magnetite contains less iron than hematite and therefore is less valuable in its primary state.

According to its Chinese government proponents, it will generate around $111 billion in direct revenue to the Australian economy and $5.5 billion in royalties for WA.

The project has suffered a number of technical setbacks and cost blowouts and has become the subject of several legal wranglings with Clive Palmer, whose Mineralogy company is a joint venture partner.

In his most recent address to shareholders, Citic chairman Chang Zhenming referred to challenges in terms of ‘no pain, no gain’.

Mr Chang said Citic was preparing for increased depreciation and interest costs now the mine was in operation.

“The only remedy for this effect is to scale up production,” he said.

While details on expanding the 24mtpa project are scarce, Mr Chang asked for patience and said Citic would not immediately seek to increase economies of scale.

Two of the Sino Iron project’s six production lines are currently in operation, and the company last month shipped its first 1mt of magnetite concentrate from its port at Cape Preston in the Pilbara.

There are a number of proposed magnetite projects in the Mid West and Pilbara.

Ms Anwyl said MagNet members had absorbed news of the failed proposal by junior Padbury Miner to develop the $6 billion Oakajee port, which could unlock many magnetite mines in the Mid West region.

“(It) is not seen as a setback by MagNet members,” she said.

“Transhipping from new ports or from existing shallow and deepwater ports may offer some viable solutions for emerging miners.

“This may provide low cost solutions and assist with the current shortage of readily available berth space in WA ports.

“Magnetite most definitely has a bright future in Australia.”

Declining productivity has been named the top risk the mining industry faces, according to a new report by EY.

Low productivity has arisen because miners pursued volume growth at almost any cost during the boom, and many were now trying to combat with cost cutting, the report said.

However, it said the entrenched nature of the problem was too large to be fixed by cost cutting.

“Real and sustainable productivity improvements may require significant adjustments including changes to mine plans, reassessment of mining methods, changes to equipment fleet and configuration and increasing automation,” the report said.

“We want to get past this simplistic notion of boom or bust to ensure that we have as many phases of the investment cycle operating concurrently,” Mr Barklamb said.

AMMA, which represents hundreds of mining employers, has focused its lobbying efforts to increase the number of mining projects in the pipeline and restart workplace relations reform, which it says are key to greater productivity and a sustainable industry.

“The ports are a classic example of an area where unions are historically very strong and well supported, but that strength and support which is entirely a legitimate thing for unions to enjoy has translated into a disproportionate ability to harm the employer and to harm an industry,” Mr Barklamb said.

“(The action against) Teekay Shipping shows us how less than 100 employees can potentially threaten a multi-billion dollar industry.”