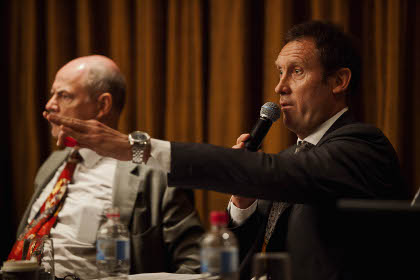 The board of TFS Corporation has survived a tough annual meeting that saw executive chairman Frank Wilson call upon the company’s legal adviser, auditor and fellow directors to help deal with numerous critical questions from shareholders.

There was standing room only for late arrivals at the meeting, where shareholders repeatedly questioned the board about the company’s disclosure standards and corporate governance practices.

Most shareholders were content with how the company has run its core sandalwood plantation business, but many at the meeting were not happy with Mr Wilson’s response to some of their questions.

The shareholder sentiment was reflected in the 51 per cent vote against adoption of the company’s remuneration report.

The board’s critics included former director Blake Myles, who was part of a group that had called on the company to requisition a general meeting to consider the removal of Messrs Wilson, Atkinson and Matthys and a fourth director, cricketing great Adam Gilchrist.

Mr Wilson initially went on the front foot to address many of the issues that have been aired in recent months, including speculation about a private equity bid for the company.

He confirmed that a US-based private equity fund had put forward an indicative takeover proposal in April, priced at 85 cents per share.

That compared with the prevailing share price of about 50 cents and the current price of 45 cents.

Mr Wilson, who was chief executive but not a director at the time, said the board engaged professional advisers to assess the offer, but it was never formalised and ended up being withdrawn.

He defended the board’s decision to not disclose the indicative offer, citing David Jones’ recent disclosure of a takeover proposal that ended up being bogus.

Mr Wilson also attacked suggestions he was trying to "privatise the company at a cheap price" and told shareholders he had not been having talks with private equity funds in New York about another takeover offer.

Shareholders asked how the board racked up corporate advisory and legal fees on the takeover, believed to total $1.3 million.

“We’re doing our best to ensure we haven’t overpaid in that area and we understand our shareholders are concerned about where the spending is,” Mr Gilchrist said.

Mr Wilson, who is the company’s largest shareholder, told the meeting the current board was considering the appointment of additional independent directors, including an independent chairman.

However, this was not enough to satisfy some shareholders, who questioned the independence of most of the current directors.

One shareholder pointed out that Mr Matthys is a close friend and was best man at Mr Wilson’s wedding, Mr Atkinson is a former business partner of Mr Wilson (at law firm Wilson & Atkinson), and Mr Gilchrist is a director a company that previously provided marketing services to TFS.

The company’s solicitor Jeremy Wade said all of the directors qualified as being independent, because friendship was not a relevant factor and none had business relationships that would affect their role.

“The fact that Mr Atkinson and Mr Wilson may have had a business relationship some years ago is not relevant because the ASX (corporate governance) guidelines talk in terms of the previous two years,” Mr Wade told the meeting.

“In no way do the names offered as a replacement increase the independence (of the board); in fact, it would do the exact opposite,” Mr Wilson said.

He added the current board would not be “harassed or bullied into appointing someone inappropriate”.

Another contentious issue was the company’s disclosure of its funding and investment deals with wholesale investors.

Mr Wilson said its Beyond Carbon investment scheme had brought $180 million into the company and enabled it to avoid the fate of other managed investment scheme (MIS) promoters, such as the failed Great Southern and Timbercorp.

One shareholder summed up the criticism by saying “the heart of the matter is transparency”.

“The problem is that we do not have any clarity from year to year on the sales process, on what has been sold, where the money has come from, and the time frames for settlement,” the shareholder said.

Mr Wilson said in future the company would only book sales when the money was received from wholesale investors.

He also called on the company auditor, Bentleys partner Phil Rix, to explain the accounting treatment of wholesale investment sales.