Get ready for lean resources boom

Local businesses wanting to tap into the resources sector have not missed their chance, but the future will not be as easy as it once was for contractors and suppliers to the big projects. 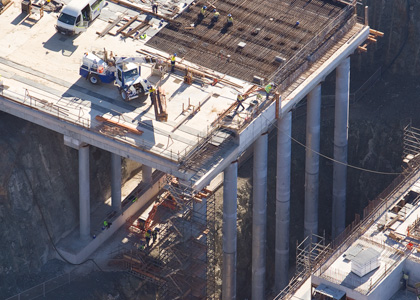 SQUEEZE: Rio Tinto has shifted its focus to effi ciency and productivity at its Pilbara iron ore expansion projects.

Local businesses wanting to tap into the resources sector have not missed their chance, but the future will not be as easy as it once was for contractors and suppliers to the big projects.

Rio is the state’s largest iron ore miner and is the one company that has continued on a steady investment path in its Pilbara mines and infrastructure.

It will continue to invest but its focus has shifted increasingly to efficiency and productivity.

That was most clearly illustrated by its plan to lift output by 7 million tonnes per annum, by getting more output from its existing mines and working its rail and ports infrastructure more effectively.

Rio expects to get the higher output, even after shelving a planned $1 billion expansion of its Brockman mine.

Its big rivals, BHP Billiton and Fortescue Metals Group, have been more dramatic in their actions this year - BHP shelved its circa $20 billion outer-harbour project at Port Hedland and Fortescue halted its 40mtpa Kings mine development.

They have been followed by several other projects - the Oakajee port and rail development, Jupiter Mines’ Mt Ida project in the Yilgam and just last week Grange Resources’ Southdown project near Albany - which have all been put on the backbumer.

For those still in the production game, there is a clear pattern emerging. Like Rio, all producers are striving to get more growth with minimal outlays.

This was reflected in the Australian Bureau of Statistics’ capital expenditure survey, released last week, which showed a lift in current spending but a sharp decline in expected business investment.

The shift in strategy follows recognition that the very fat margins that prevailed in 2011 and early 2012 are unlikely to return.

The exuberance that saw all current and aspiring producers pursue growth projects simultaneously led, not surprisingly, to unhealthy spikes in costs.

The winners during this period were the contactors, who were able to dictate terms like never before.

Most contractors delivered record profits last financial year but they have seen the writing on the wall.

Over the past fortnight, contractors Ausdrill and NRW Holdings, engineering firm Lycopodium, transportable accommodation manufacturer Fleetwood and drilling specialist Boart Longyear have all signalled a downturn in their earnings outlook.

This cross-section of businesses illustrates the new normal; there is still a lot of work available, but it won’t grow as fast as they had been anticipating and their margins will be under pressure.

Amid talk of cutbacks and global economic uncertainty, it is easy to forget the scale of opportunities over the next two to three years.

The big three iron ore miners will together invest more than $30 billion, as they lift their combined production capacity in the Pilbara from about 450mtpa currently to in excess of 700mtpa.

That is still extraordinary growth by anyone’s standards.

There is a very good chance they will go even higher, with Fortescue signalling very strongly in recent weeks it is likely to revive its Kings mine development later this month.

And then, of course, there is the massive investment in LNG projects around the country - Gorgon and Wheatstone in the Pilbara, the Ichthys project in Darwin and three coal seam gas-to-LNG projects in central Queensland.

The planning and engineering phase of these projects is well advanced but the construction phase is yet to reach its peak.

The events of August and September, when the iron ore price plunged dramatically, illustrate the uncertainty inherent in business planning. And anyone looking out more than two or three years will be staring into a very unclear future.

But has any business ever really been able to plan with certainty for more than two or three years? I doubt it.