Full bellies and hugs at The Romany

A restaurant that has been around in one form or another for the best part of six decades must be doing something right. Russell Quinn discovers some secrets of The Romany Restaurant’s success. 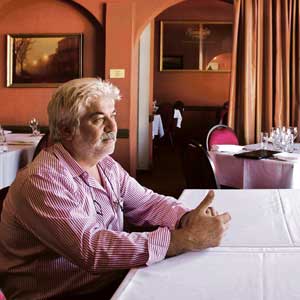 CONSISTENT: Enzo Develter inside the new Romany, which he says is just like the original. Photo: Grant Currall

THE threat of demolition and a forced relocation could be a recipe for failure, but for Western Australia's oldest Italian restaurant it signalled a new beginning.

The Romany Restaurant has been a permanent fixture on Perth's dining circuit for over 60 years, with about 35 of these spent on William Street in Perth, just north of the horseshoe bridge.

But the Romany era may have come to an end when the state government's planned cultural centre development got the go-ahead, which required the restaurant be demolished to make way for the state theatre.

Thankfully for the Romany's loyal customers, and its extremely loyal staff, owner Enzo Develter decided about three years ago to continue his 15-year restaurateur career and not go into semi-retirement.

Buying the building on the corner of Aberdeen and Lake streets, where the Romany is currently housed, was a major gamble considering Mr Develter received no compensation from the government due to a demolition clause on the William Street property.

But it was a gamble that paid off.

"The first week we opened, and for the first year, it was so busy it was out of control," Mr Develter told Gusto.

"And this place was empty for something like four years.

"Nobody wanted it, it was derelict, it was an empty place."

After two and a half months and almost $400,000 in renovations, more than double initial estimates thanks to the building boom, the Romany reopened its doors to its adoring clientele.

"I designed this place to be very similar to the old Romany, and the old Romany had red carpets and curtains and three rooms, and I did the same thing here," Mr Develter says.

But luck had nothing to do with keeping his staff around.

Mr Develter had initiated a system with his employees, similar to a loyalty or bonus scheme, which rewarded staff with cash incentives for serving out longer periods of employment; all the time paying them above award wages.

Some of the cooks and wait-staff have been at the Romany for three decades.

"Rosa has been with us for over 30 years at the Romany," Mr Develter says.

"And Natasha grew up at the Romany, she's 30 or so, and her father actually owned the original Romany.

Consistency in the kitchen has been of paramount importance to the success of the Romany because keeping both food and staff familiar to regular customers has turned the establishment from a run-of-the-mill restaurant into a something more like a private club.

"There was a person here (today) who has been here everyday this week," Mr Develter says.

"It's massive repeat business, which makes it frustrating because you can't change.

"I mean, they'll tell you, even if I change the calamari to a different make, they'll know.

And this traditionalist theme runs through everything, including Mr Develter's penchant for hugging his customers.

"Hugging is so important.

"I have managing directors of multi-billion dollar companies coming in here looking for a hug, 'where's Enzo?', they say, .. and next moment he's buying a company or chairing a whatever."