Finbar is planning a 30-storey residential tower at the Civic Triangle site in South Perth, flagging a $300 million proposal today after completing the acquisition of the property in a transaction initially announced last month. 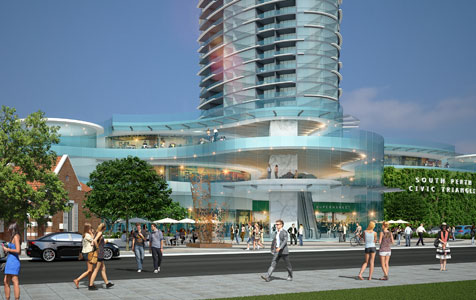 A conceptual impression of the completed development, facing Mends Street.

Finbar Group is planning a 30-storey residential tower at the Civic Triangle site in South Perth, flagging a $300 million proposal today after completing the acquisition of the property in a transaction initially announced last month.

The oval-shaped tower will comprise around 295 apartments and include a retail centre incorporating a 2,500 square metre supermarket, as well as commercial offices, medical rooms, a gym and a childcare centre.

The sale of the site, which was finalised this week for $27.3 million, was brokered by commercial agency JLL.

Terms of the sale include a four-year development timeframe.

Finbar said it would form a consortium with its landowner partners, who will contribute $40 million to the development.

The apartment developer will contribute $20 million in cash and also secure development finance and manage the development of the site.

Finbar and its partners will share the profits from developing the site equally.

Detailed design work is ongoing, with plans expected to be submitted for approval before the end of the year. An artist's impression of the residential tower concept.

Finbar managing director Darren Pateman said the building would be the largest individual single-stage project the company had undertaken.

“We have acquired what will become Finbar’s most exciting individual single-stage project to date and our partners and entire Finbar team are very enthusiastic about creating South Perth’s new civic heart,” he said.

“I attended kindergarten on this land, so I will personally be very excited to turn the sod once again when we start construction work on this iconic development, albeit with a full-scale excavator this time.”

JLL director of sales and investment Tom Natrass said the building would become a significant landmark for South Perth, being the tallest building outside of the CBD and the largest project built on the South Perth peninsula.

Mr Nattrass said the project would also generate significant street activation through a major pedestrian plaza adjacent to the retail and commercial precinct.

The sales process comprised a five-week international expressions of interest campaign and a private tender phase.

“The sale of Civic Triangle was an exceptional opportunity and the market responded accordingly during the sale campaign,” he said.

“A good number of international development groups showed interest, but in the end the most compelling bids came from local and Australian-based companies.

“Finbar’s tender and development proposal demonstrated a high level of compatibility with the City of South Perth’s long-term strategic vision for develop of the precinct.”