Middle Island Resources has continued its extraordinary track record at the Sandstone project in Western Australia, identifying a fifth new gold deposit from its latest drilling program that took in an impressive 13.4 kilometres. The company’s recent evaluation of historical data identified the Ridge prospect, which contains solid intercepts like 13 metres grading 3.81 grams per tonne gold from just 24m. 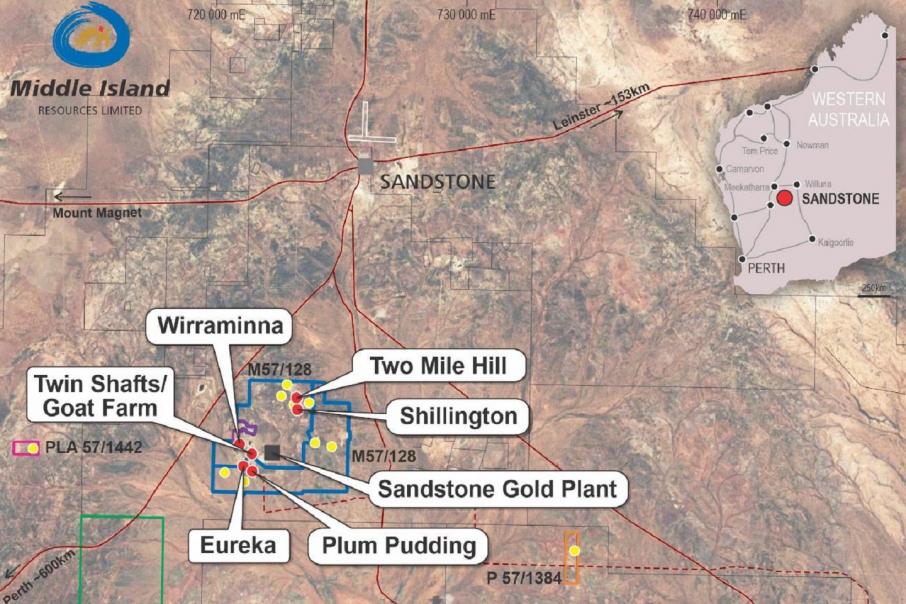 Middle Island Resources has continued its extraordinary track record at the Sandstone project in Western Australia, identifying a fifth new gold deposit from its latest drilling program that took in an impressive 13.4 kilometres. The company’s recent evaluation of historical data identified the Ridge prospect, which contains exciting intercepts such as 13 metres grading 3.81 grams per tonne gold from just 24m and 8m grading 4.14g/t gold from 59m downhole.

The Ridge prospect spans some 225m in length and the company now plans to put down some phase two confirmatory holes prior to wrapping a maiden resource around it.

The Perth-based company’s plan is to bring any new discoveries into its updated global resource estimate and subsequently, into the company's impending pre-feasibility study - this plan includes some 17,300m of drilling.

The Rick Yeates-led company said there may be a modest increase in ounces at Shillington and Shillington North, along with a reclassification from the inferred to indicated resource category once all the data has been fed into an updated resource.

There are two existing pits that have now been looked at and re-optimised over the two Shillington satellite deposits, which are separated by around 100m.

It is possible that the two optimised pits may link up to form one larger open pit, which bodes well for the planned feasibility study.

Middle Island also took a punt and drilled one hole about 20m south of the existing Shillington open pit and it returned some interesting results including 2m grading 1.92g/t and 3m grading 6.86g/t gold from 62m and 67m, respectively.

These numbers are encouraging, as they suggest the Shillington mineralisation that is hosted in a Banded Iron Formation or “BIF”, may continue to the south-east and head towards the Ridge prospect over some 1.15km of unexplored ground, according to the company.

Notably, recent geological mapping found that Ridge is hosted in a BIF, which can also be traced between the two prospects in the aeromagnetic image.

The northern-most drill intercept at the Ridge prospect is a 3m zone grading 8.78g/t gold from 18m downhole, providing some further encouragement that the two deposits might just link up between the 1.15km gap.

Middle Island has now significantly expanded its phase two drilling plans, which it said are expected to keep rolling on from this week.

Phase two will target the gap between Ridge and Shillington in earnest.

The Ridge, Shillington, McLaren and McIntyre deposits all appear to be commonly hosted in a BIF and Middle Island’s Managing Director Rick Yeates said: “Despite the absence of significant new RC drilling results from the Ridge prospect, geological mapping and outstanding drilling results derived from the cluster of BIF-hosted deposits in this area are a clear highlight of the drilling campaign to date.”

“An understanding of drilling results in the context of a revised geology model, suggests the resource potential of this deposit cluster could ultimately be very significant. As such, a substantial portion of the planned Phase 2 RC and diamond drilling will be dedicated to this area.”

Ten RC holes were previously drilled by the company into the McLaren prospect that came up with an exceptional 4m intercept grading nearly three ounces to the tonne gold.

The drilling at the Goat Farm deposit has also confirmed that the mineralisation appears to be inherently linked with the Twin Shafts deposit.

Middle Island said that if the mineralisation at Goat Farm and Twin Shafts turn out to be economic during the updated feasibility study, the waste rock from the deposit will provide a handy source of local material to facilitate an extension or a lift to the tailings dam.

With an additional five new prospects to model up above and beyond the 624,000 ounce resource at Sandstone, Middle Island might just be able to switch its mothballed 600,000 tonne per annum CIP mill back on sometime soon and if it does so, it will take on an entirely different market complexion.