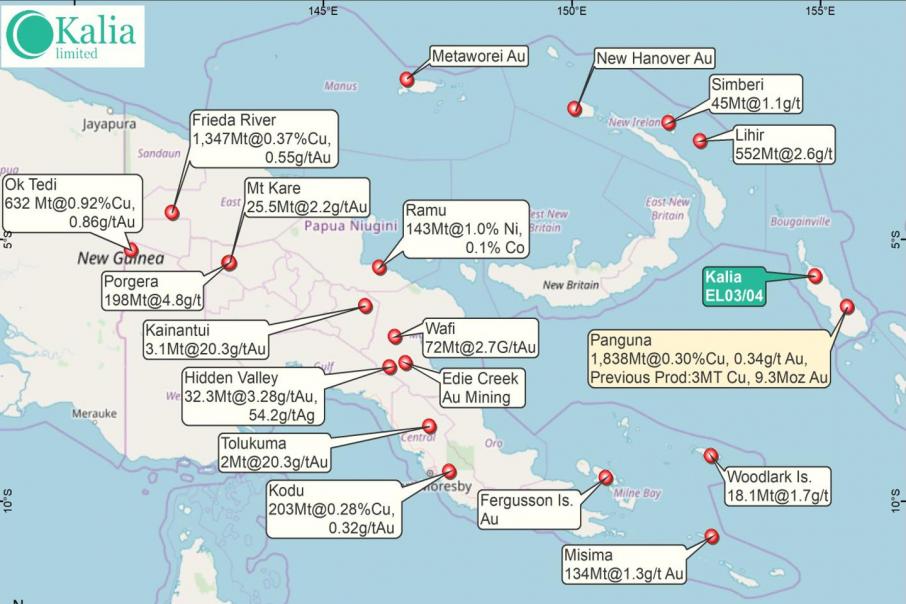 Dr Garwin has been directly involved in numerous exploration and mining projects, including the Batu Hijau porphyry mine in Indonesia that holds an ore reserve of 9 million ounces of gold and 4 million tonnes of copper.

His recent discovery of the world-class Alpala porphyry deposit in Ecuador is even better, holding about 11 million tonnes of copper and just over 23 million ounces of gold.

The investigation unearthed five significant regions of interest on the company’s tenements, including a new unexplored target 60 square kilometres in size that is characterised by anomalous copper-gold assays in geochemical stream sediment samples dating back 30 years.

Kalia says that the geological review validates the work program the company has already undertaken at Mt Tore and helps vector future exploratory campaigns on the island.

Most of the upcoming regional programs will be helicopter-supported given the terrain and the remote locations of individual targets.

Kalia will focus its field sampling programs around the key locations, to identify and rank targets for maiden drilling programs in the project holdings expected to kick off later this year.

The company recently received $250,000 in funding from private company Tygola under a loan arrangement and is also arranging structures for longer-term funding to underpin more expansive exploration activities on Bougainville.

Kalia completed a detailed airborne geophysical survey over its Mt Tore leases in 2018, which threw up 64 porphyry and epithermal exploration targets.

The style of porphyry copper-gold deposits the company is seeking on Bougainville are highly sought-after globally because they boast some of the largest ore reserves of these desirable commodities.

And it couldn’t hold a better address, not only is Kalia exploring in the “Pacific Ring of Fire” region, which holds many world-class copper-gold porphyry systems, its Mt Tore tenements are located only 130km northwest of the gigantic mothballed Panguna copper-gold mine.

Kalia Technical Director Peter Batten said: “Prior to Dr Garwin’s report Kalia had 64 geophysical targets, of varying priorities, based on the geophysical survey and subsequent analysis as completed by Fathom Geophysics …”

“Dr Garwin has identified those areas that Kalia should turn its focus to as a priority, including an area not previously considered. Three areas have been classified with potential for porphyry copper-gold centres and another is a region of epithermal geochemical signatures.”

"Kalia plans to tighten the sampling around key locations with stream sediment sampling and soil sampling … to enable the best identification of first drilling locations.”

“Planning will commence on helicopter support programmes for those areas identified from the survey and review that are not readily accessible by foot due to the limited road infrastructure.”

Kalia’s Managing Director Terry Larkan added: “(Dr Garwin’s) … report confirms the validity of the company’s existing exploration programmes and recommends further sampling regimes to enable the better definition of the potential centre of mineralisation in each of the identified locations.”

“A key takeaway from Dr Garwin’s report is his statement that the style of hydrothermal alteration and mineralisation reported to date compares favourably to other porphyry-epithermal systems in SE Asia and the SW Pacific, prior to the discovery of major deposits (e.g. Batu Hijau and Elang, Indonesia).”

“The ratification of our belief in the potential of these exploration areas through the expertise represented … is significant and a positive reinforcement that our team is going about things the right way.”

“Tygola has agreed to fund the company with a further $250,000 to continue our current level of exploration while we arrange longer-term funding to enable Kalia to implement a larger and more expeditious exploration programme.”