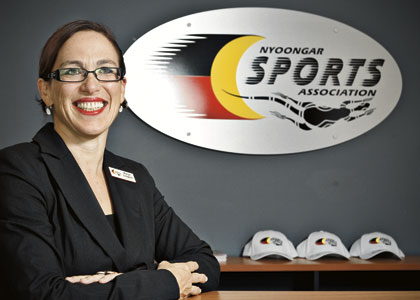 AGENDA: Karyn Lisignoli is working to grow the breadth of the Nyoongar Sports Association’s programs and minimising its reliance on government funding. Photo: Grant Currall

FIVE years after its launch and having developed a strong relationship with Aboriginal communities, the Nyoongar Sports Association has launched a new strategic plan aimed at diversifying its funding streams and leveraging corporate partnerships.

Close to 85 per cent of the association’s current funding comes from the federal government under the Indigenous Sport and Recreation Program. This is bolstered by some fee-for-service work, state government funding for specific programs, and corporate sponsorship.

The federal funding is currently re-signed on an annual basis, and while it will move to a triennial funding stream next year, NSA is looking to reduce the insecurity that comes with regular rounds of negotiation for government support.

“Like in any community organisation that is predominantly funded by government, you can be beholden to government,” Nyoongar Sports Association chief executive Karyn Lisignoli said.

The association’s plan is to find a corporate partner prepared to view the challenges facing the Nyoongar population – which covers ground from Geraldton to Esperance and out through the Wheatbelt – in the same light as NSA.

The association is primarily focused on improving health and wellbeing through the tool of sport and recreation, and looks to flow-on effects from that, such as greater education and training levels, employment and social wellbeing.

It is an Aboriginal organisation, meaning it is governed by an indigenous board, and operates in what Ms Lisignoli calls the ‘third space’.

In fighting for the rights of the Nyoongar community, NSA acknowledges the impacts of colonisation on the indigenous population but focuses on moving forward and empowering the community by building life skills.

“We have got an initial partnership formed with Access Group, a national partnership, which is great. We are also looking to secure a principal and foundation corporate partner who aligns with the values that we have.”

Part of the strategic plan is to create measurement systems that can monitor the outcomes of the association’s programs.

Ms Lisignoli said the work of not- for-profit groups often was measured by throughput – typically the number of people accessing services or programs – but there were other measurements that would be more effective.

“Funding is often based on throughputs; measuring outcomes isn’t often the focus and it can be problematic in terms of that causal relationship,” she said.

“If we are looking at enhancing Aboriginal wellbeing, there is a whole pile of factors that impact on that. It is difficult to measure what our role is in doing that, but we are working to do that by asking, first of all, are we improving people’s fitness, are we improving their knowledge about health and fitness?”

Ms Lisignoli said NSA had a good awareness level among the Nyoongar community and the third sector and government agencies, but was working to build its profile within corporate WA.