The long-awaited Strategic Energy Initiative has some positives but more is needed. 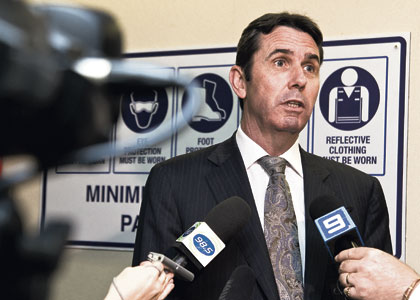 The long-awaited Strategic Energy Initiative has some positives but more is needed.

ENERGY Minister Peter Collier must have been pleased with the initial reaction to the release this week of the grandly named Strategic Energy Initiative. Dig a little deeper, however, and in many cases the polite responses evolved into strong criticism.

The most enthusiastic response was from DomGas Alliance chairman Tony Petersen, who represents power producers and other businesses that buy gas.

He said the state’s gas reservation policy had been significantly tightened.

“WA governments from all sides of politics have long understood the importance of domestic gas security,” Mr Petersen said in a statement.

“This is a great example of a practical energy policy that helps keeps the lights on.”

Other business groups welcomed the policy paper’s release, though their praise was muted, and they may have been motivated by relief as much as anything.

Chamber of Minerals and Energy of Western Australia chief executive Reg Howard-Smith said the long-awaited report would be welcomed by the resources sector.

He also noted the extremely protracted process and the lack of clarity, saying the policy paper had been released “after nearly four years and extensive consultation”, and that it “provides for yet further consultation”.

The Australian Petroleum Production and Exploration Association was cautiously supportive.

Chief operating officer western region, Stedman Ellis, said the policy paper “supports a number of steps that will assist in the ongoing development of a more competitive energy market in WA”.

It also includes a “welcome recognition of the importance of onshore gas in meeting increasing energy demand in Western Australia”.

Another positive was the clarification of the domestic gas reservation policy; specifically that it retained the emphasis on markets to determine prices and contracts for domestic gas supply and the flexibility needed to facilitate further investment in upstream supply.

Then came the criticism.

Chamber of Commerce and Industry WA chief executive James Pearson was the least supportive, saying the paper “provides a vision for the energy sector that looks in the right direction, but doesn’t provide the specific detail the business community was hoping for”.

He called on the government to provide timeframes for when WA will reach the true cost of producing electricity, when households and small business will have a choice of their electricity retailer, and to definitely rule out the re-merger of Verve and Synergy.

“However, the specific measures needed to achieve this haven’t been committed to yet.”

“While Minister Collier has stated the Verve Synergy re-merger was not a priority, the SEI does not rule this out,” Mr Howard-Smith said.

“A competitive energy market is essential for a strong Western Australian economy and a key theme for the future growth of the resources sector along with people and water.”

WA Business News has cautiously accepted the rationale for a domestic gas reservation policy, particularly during periods of overheated markets.

In practice, the policy has been applied very flexibly, such that gas exporters can’t claim to have been adversely affected.

And while the DomGas Alliance has embraced the new policy paper, it still provides for a great deal of flexibility in the way the policy is applied.

The likely outcome seems a reasonable compromise – gas producers will need to supply the domestic market, but with prices and contract terms determined by the market.

Market pricing will help to encourage domestic gas plants – the state already has three, at Karratha, Varanus Island and Devil Creek, and three more are on the way, at the Macedon, Gorgon and Wheatstone projects.

Add in the prospect of new gas plants using onshore gas, and there should be no shortage of gas in the domestic market.