End of the boom? Barnett says a slowdown isn't bad 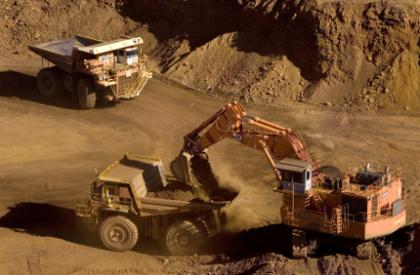 Debate has continued apace regarding the health of the mining industry, with federal cabinet ministers voicing contradicting views, the federal opposition saying project investment cuts are a sign of things to come, and Premier Colin Barnett claiming a slow-down might not be so bad after all.

Mr Ferguson began the discussion this morning on ABC Radio, saying: "You've got to understand, the resources boom is over. We've done well".

But that view was not supported by Senator Wong.

The finance minister, when asked whether she agreed with the resources minister, told ABC TV: "No, I think the mining boom has got a long way to run".

"I guess I would put it as that the mining boom is moderating rather than over," Mr Champion told reporters in Canberra on Thursday, adding that the moderation was due to world economic conditions.

"You can see that things are, obviously, coming off in Europe a bit and China's slowing down a bit."

But there was still every reason for confidence in the long term, Mr Champion said.

"If Europe gets its act together, then the world economy will start growing again," he said.

Parliamentary secretary Mark Dreyfus said there was nothing particularly new in what Mr Ferguson was saying, pointing to Reserve Bank of Australia (RBA) estimates showing the mining boom would peak in 2012/13.

He said the construction phase was moving to the export phase.

Liberal MP Rowan Ramsey said he was disappointed a resources minister would make such a comment, but conceded things were getting tough in the sector.

"Let's get out there and speak with a bit of confidence and say that we want to deliver some of these projects," Mr Ramsey told reporters.

The federal opposition, however, seized on BHP’s decision to scrap major mining expansions in South and Western Australia, saying it could be just the beginning of a more significant slow-down.

Coalition MPs, including deputy opposition leader Julie Bishop, blamed the carbon and mining taxes for creating an unattractive investing environment in Australia and adding a financial burden to resource companies.

Ms Bishop said mining companies had been warning about the impact of the taxes, and that the decision on the Olympic Dam and Port Hedland projects could be a sign of things to come.

"Our fear is this is just the beginning," Ms Bishop told reporters in Canberra.

"The investment environment is nowhere near as healthy as before this government came into office and implemented these policies."

Ms Bishop blamed federal Treasurer Wayne Swan for creating uncertainty in the resource industry, saying his "attacks" on the sector were "now coming home to roost".

"The $20 billion Port Hedland expansion is obviously impacted by the mining tax because that is an iron ore port," he said.

"Of course, these investment decisions are not considered in isolation.

The 30 per cent minerals resources rent tax is paid on the super profits of coal and iron ore producers.

Premier Colin Barnett chimed in this afternoon, saying falling commodities prices and slowing resources were not necessarily a bad thing.

With the price of iron ore and other minerals coming off record highs, Mr Barnett said mining and resources investment was still strong and prices would start to recover in the next six months.

"There is $167 billion worth of mining and petroleum projects either under construction or committed to construction in WA," the premier told reporters in Perth.

"So to some extent, a little slowing of some of the future projects will allow a more orderly development of our natural resources, take some of the pressure off support industries - like transport - and allow this period of construction to continue over a longer period.

"It's not a bad thing that we're seeing prospective projects slow."

Mr Barnett said there was "no doubt" demand-driven commodities prices had reached an "unsustained peak" in recent years, but they were still at historic highs.

"The peak may have come off, but we are still in the environment of generally strong commodity prices and growing demand," he said.

"I would suspect you will probably see in six months time they gradually start to rise again."

Mr Barnett said one of the benefits of more sustainable development was it would take pressure off other industries and costs of living.

"It does take some of the pressure off skills shortages, on transport and housing costs and housing supply," he said.

"And if this period of investment spreads over a longer period, then there will be more benefits through the WA economy."