From a modest industrial building in Willetton, newly rebadged investment company Diverseco has built a substantial national business through a series of targeted acquisitions. 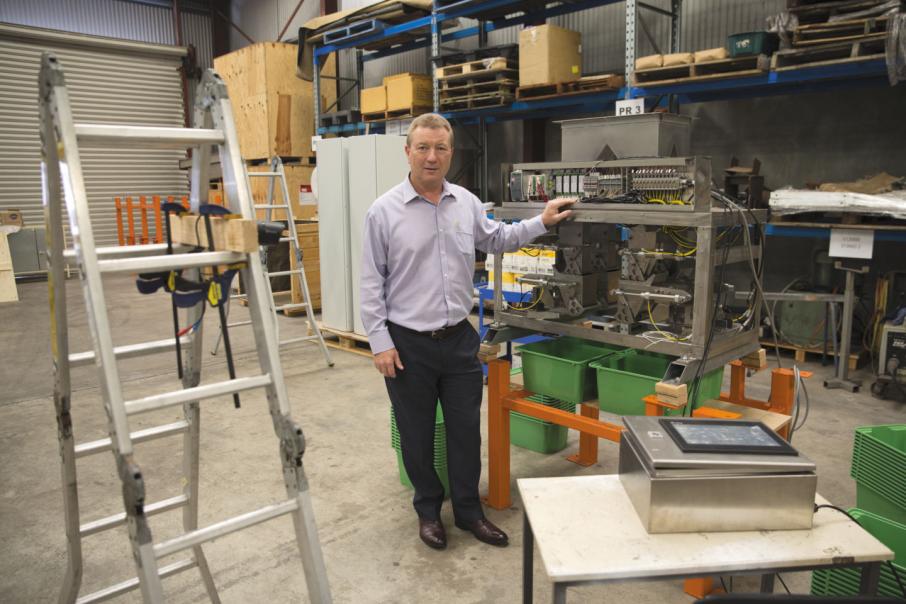 From a modest industrial building in Willetton, newly rebadged investment company Diverseco has built a substantial national business through a series of targeted acquisitions.

While many businesses batten down the hatches during tough trading times, Brenton Cunningham has pursued growth opportunities.

Mr Cunningham has recently completed the purchase of Melbourne-based Robotic Technologies Australia, which brings to 10 the number of acquisitions he has completed.

It followed last year’s purchase of 80-year-old company Sydney Weighbridges, which will be relaunched as Public Weighbridges Australia in the New Year.

These acquisitions add to a diverse collection of measuring, packaging and automation businesses his group owns and operates – hence the choice of Diverseco as the new name for the holding company.

The core business in the group remains Accuweigh, which Mr Cunningham and partner Gary Brogan established in Adelaide in 1992.

Accuweigh accounts for about half the group’s annual turnover, which currently exceeds $40 million and is expected to reach $45 million next year.

The overall group employs 165 people across seven operating businesses, including Scaco, Ultrahawke and Accupak, which was founded by engineering director Ross Waller.

“They need to be a little bit tired and broken, because that way we can afford it and there is something for us to fix,” he said.

“If something is going well, you pay top dollar and there is nothing to fix.”

The latest acquisition, Robotic Technologies Australia, was a pioneer in its field, and its founder Doug Smith has vast technical knowledge and industry connections.

However, Mr Smith is aged 70 and the financial performance of the business has waned over several years due to a weak balance sheet and the downturn in the automotive sector.

Mr Cunningham spent five years assessing the opportunity and at one stage walked away during due diligence before closing the purchase.

He was also attracted by Mr Smith’s connections, particularly with Japanese company Kawasaki, which is a global leader in robotics.

The purchase of weighbridge operator Sydney Weighbridges was similar.

It was a small business but had specialist expertise Mr Cunningham believes will complement the services offered by Diverseco’s existing businesses.

Diverseco has been structured as the corporate services provider to the operating businesses, providing services such as HR, payroll, marketing and IT.

The operating businesses are charged based on their salary expense, with Diverseco seeking to cover its costs.

Mr Cunningham started his working life as a fitter and turner before spending five years in the finance sector, where he went through a structured management program.

“I didn’t set out to be a CEO,” Mr Cunningham told Business News.

“I wrap myself around good people and empower them to do their job.”

Mr Cunningham said he had looked at listing options a couple of times but opted against it after evaluating the compliance costs and acknowledging weighbridges was not a sexy, high-growth industry.

“But we perform better than half the companies on the stock exchange anyway,” he said.

Despite that, Diverseco maintains reporting systems akin to a listed company, with minute taking at board meetings and regularly updated budgets, business plans and monthly financials.

Mr Cunningham said he had been surprised at the failure of many other businesses to do these things.

“I’ve gone into 30-year-old businesses with 100 people and asked them for the budget, and they haven’t got a budget.”

Not all of the growth opportunities pursued by Diverseco have worked, however.

The group made ill-fated forays into New Zealand and South Africa and invested in Balcatta-based Olympic Fine Foods, but has since exited those markets.

Mr Cunningham said the business units in Diverseco fitted well together, and their geographic and sectoral diversity meant the group’s earnings had been fairly stable year to year.

“We are always cash positive; we have banking facilities but we never use them.

“I like to be secure and the same goes for the staff.”

He believes the group’s local base gives it a competitive edge over bigger international competitors.

“We try to win based on relationships, and being here,” Mr Cunningham said.