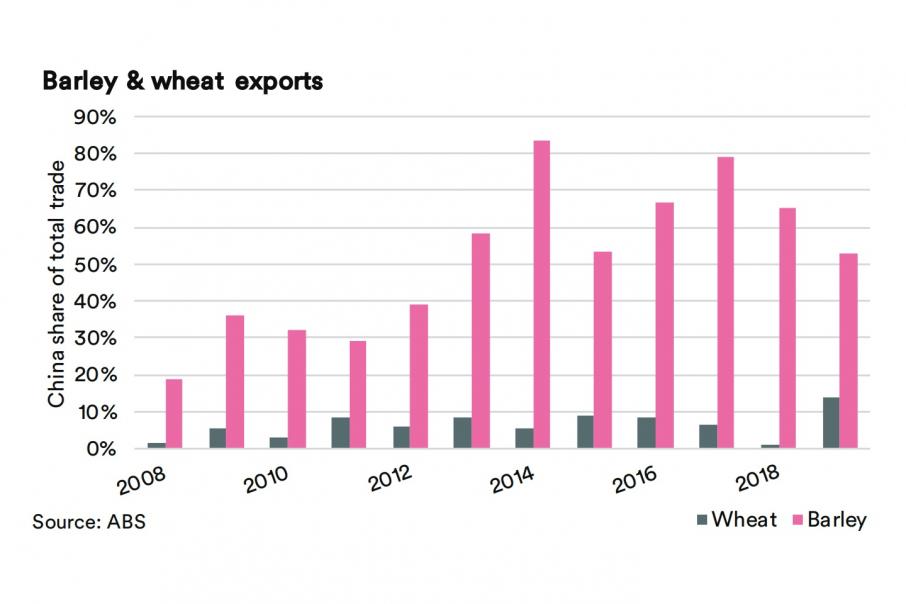 Australia’s agricultural producers have been under threat of politically motivated sanctions against their goods for the past two years, predominantly aimed at barley and beef.

Concerns started to heighten in September.

At that time, the Chinese customs agency was reportedly increasing surveillance on wheat shipments from Australia.

If he or she wants, an inspector can always find something wrong on a vessel carrying more than 50,000 tonnes of wheat.

This was a warning shot.

Now, more products are being (unofficially) added to the list on a regular basis.

This is in addition to the ban on a number of Australian abattoirs and the effective removal of China as an export destination for barley.

For Australian agriculture, wheat and wine are the two commodities (aside from beef and barley) that will have the biggest impact if banned by China.

Is banning wheat as bad as banning barley?

The simple answer is no, but let us go a little deeper.

The obvious and glaring point of the importance of China to the barley trade is how reliant Australia is on China as a partner.

On average, 63 per cent of our barley exports are destined for China.

This was not considered a bad thing, as China was paying the best price.

When Australia lost the Chinese barley trade, we were left with very few customers.

On average, we export around 6 per cent of our wheat to China.

This, therefore, points to a market where we are diversified and have alternate destinations.

While China has been significant, but not crucial for the Australian wheat industry, a ban at present is poor timing.

This year, China has started a strong wheat import program, with record imports in recent months.

This was a fantastic opportunity for Australia at a time when we are going to have a large export program as the nation recovers from drought.

The risk does not solely lie with Australia.

Although only a small proportion of our wheat is destined for China, a high percentage of that country’s imports have been from Australia, due to our proximity and high quality.

As an example, during the past decade about 40 per cent of Chinese wheat imports have come from Australia, with this figure going as high as 65 per cent.

We have, therefore, been a significant partner for China, and it is unfortunate to see the relationship sour so quickly.

The wheat industry will survive if China is removed from the mix, albeit with one less door open.

However, the outlook is not quite as optimistic for the wine industry.

China’s growing middle class and parallel rise in disposable income have resulted in an increase in the volume of wine required, especially high-quality bottles.

The concerns started when China announced an investigation into allegations Australia had dumped wine in China at below the cost of production, therefore harming their domestic producers.

This was a shock to all those in the wine industry, and concerning given the similar actions taken against barley.

From all countries, imports of wine into China are worth $US2.1 billion, making it an extremely valuable market.

As a customer, China consumes 34 per cent of our wine (in value), with a focus on more valuable varieties.

Interestingly the UK and US import larger volumes than China, but at a lower value.

This would cause considerable damage to the industry and place a large question mark on a market worth $A1.2bn.

As an export-dominated economy, especially in agriculture, we need our political leaders to find common ground with China or face a long-term restructuring of our markets.