Consolidating a legacy of care

CONSTABLE Care Child Safety Foundation founder, Jim King, had given almost 20 years of dedicated service to the not-for-profit organisation at the time of his death, last August. 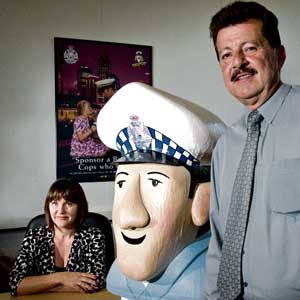 CONSTABLE Care Child Safety Foundation founder, Jim King, had given almost 20 years of dedicated service to the not-for-profit organisation at the time of his death, last August.

The foundation has been going through a challenging time since Mr King's passing, and has appointed Carla Shearman as acting chairperson.

Constable Care chief executive Vick Evans said a strategic meeting would be held on October 29 to discuss the vacant position and a new direction for the organisation.

"Certainly now, following his death, we're faced with a few challenges, but we have a good board with solid board members and I'm confident of our organisation's moving forward."

Among those currently on the board are lawyer Patti Chong, radio presenter Howard Sattler, and deputy police chief commissioner Wayne Gregson.

Established in February 1989, the Constable Care foundation takes a unique approach to helping the growth and development of the state's children by using puppet shows and plays to deliver messages to those aged from two to 12 years.

The Constable Care puppet character was a marketing gimmick created to appeal to the foundation's target market, and today is recognised by thousands of young people across the state.

From its inception, the foundation had a focus on road safety and stranger danger, but under the guidance of Mr King evolved to encompass a raft of issues including crime prevention, sex abuse, health and bullying, all delivered to children in a language they understood and in an engaging format.

As times changed so did Mr King's vision for the foundation, and Constable Care updated its programs to address new variations on old problems, such as 'cyber-bullying' (the use of SMS text messaging and emails to send intimidating, threatening and insulting messages).

Mr King was instrumental in the foundation's growth during the past two decades, becoming more heavily involved after he retired from the police service in 1990.

He served as a board member at Constable Care for 15 years before taking on the role as chair in 2005, which he held until his death.

While Constable Care is a uniquely Western Australian initiative, Mr King has left a lasting legacy at the not-for-profit organisation, with interest from regions such as Tasmania and the Northern Territory to establish a similar program, as well as from China and Singapore.

While Mr Evans welcomed the interstate and international exposure, he called on corporate Perth to provide assistance so the foundation could continue to deliver its services, particularly in regional WA.

"We are unique in that we're a proactive organisation actively seeking crime prevention measures and with a little help from business in the state, we can get our message out there, particularly to those kids at risk in rural communities," Mr Evans said.