Andrew Forrest has run a nimble and remarkably successful campaign to procure medical equipment from China, while WA’s healthcare community has rallied to prepare for the COVID-19 pandemic. 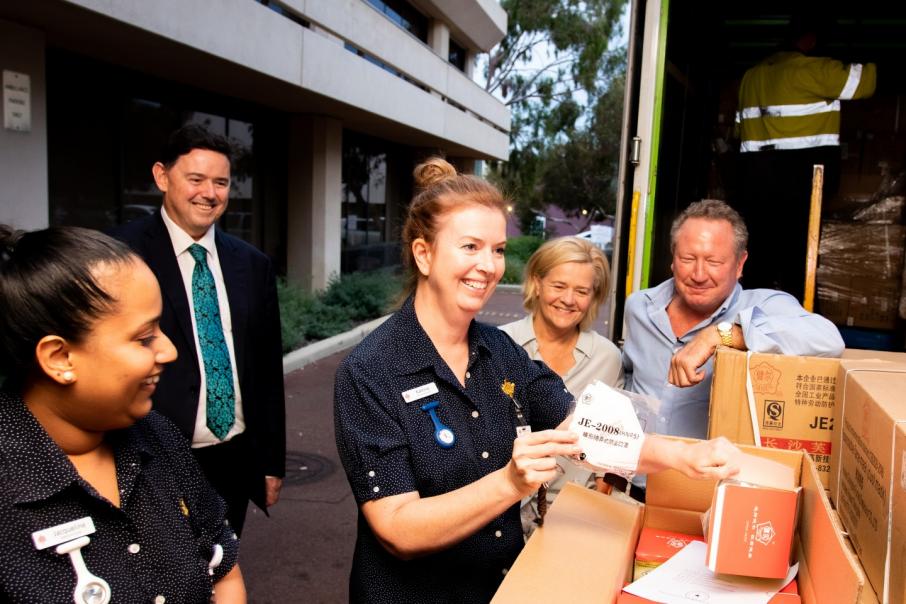 Andrew Forrest has run a nimble and remarkably successful campaign to procure medical equipment from China, while WA’s healthcare community has rallied to prepare for the COVID-19 pandemic.

Minderoo Foundation chairman Andrew Forrest is achieving through his network what governments cannot when it comes to securing equipment for the healthcare system, according to Australian Medical Association WA president Andrew Miller.

Minderoo pledged to procure $160 million of protective equipment and medical supplies from China in early April, replenishing a shortage in Western Australia’s hospitals as the COVID-19 pandemic continued its spread.

It was a welcome relief for healthcare employees, after warnings in mid-March that supplies of personal protective equipment (PPE) and hand disinfectant had been exhausted in many locations.

“Mr Forrest has always been a game changer, and that’s what we need, to change this game,” Dr Miller said.

“There are only a few levers we can pull to get ahead of [COVID-19] and succeed where, sadly, other countries have not so far.

“And his scale is bigger than government, he’s succeeded where governments have failed.”

Dr Miller said he had many offers from people to source equipment for local hospitals, but nine out of every 10 went nowhere.

“Having someone like him [Mr Forrest] means you can cut through all that,” he said.

“He’s got people who work for him on the ground there who can say ‘Yes, I’ve seen the stuff we know that it’s genuine’.

“It’s still difficult to get hold of things, everyone is trying to buy.

“Having a buyer like him with a deep pocket who’s prepared to pick it up and bring it here, that’s amazing.” 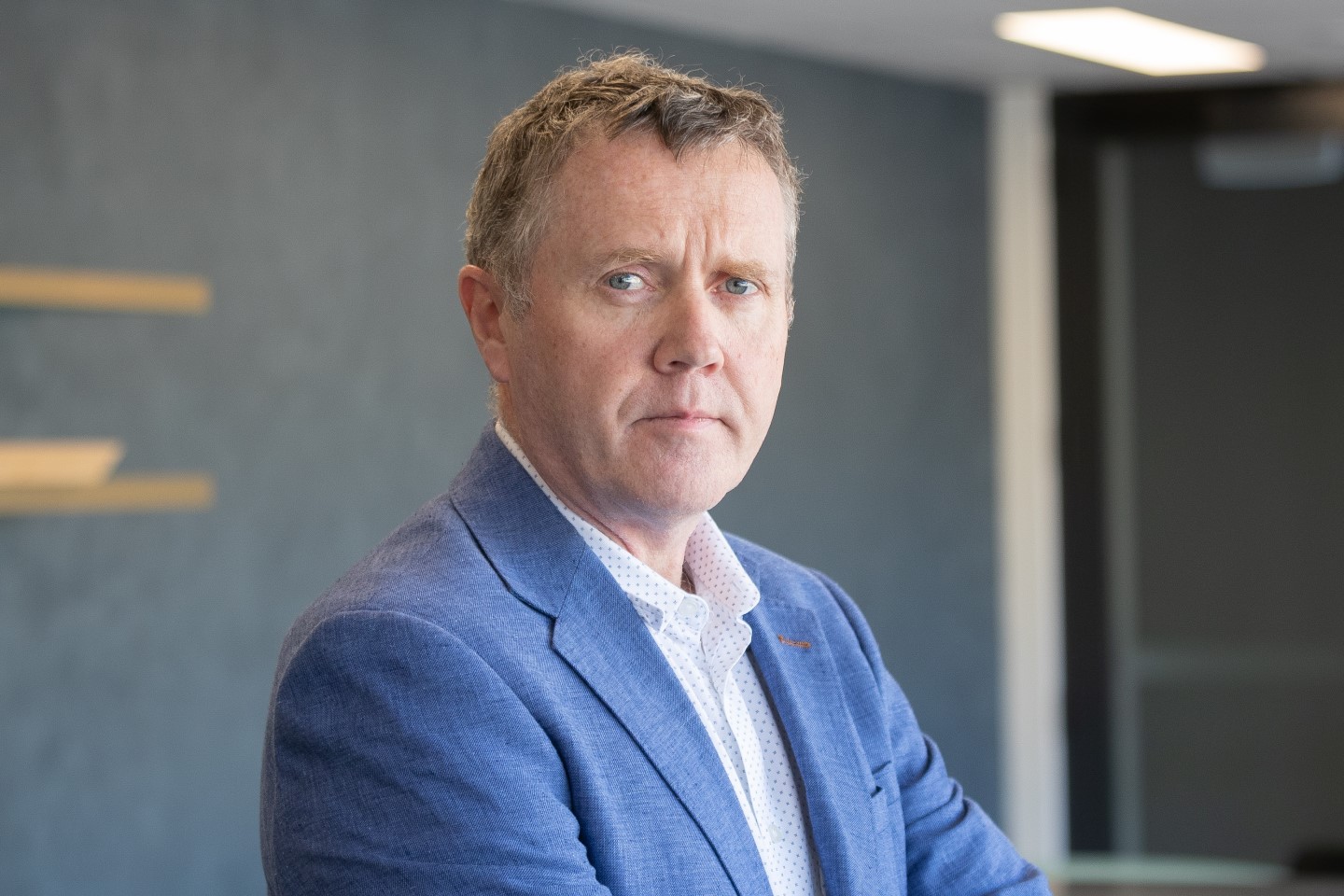 Andrew Miller has been a strong voice for action on COVID-19. Photo: Gabriel Oliveira

Mr Forrest’s connections on the ground in China, the result of his years doing business there, have proved vital as the world descends on China’s manufacturing industry with bucketloads of cash.

There’s no shortage of confusion or animosity, however, with Germany accusing the US of piracy when a shipment of N95 masks headed to Europe was diverted mid-journey after the US offered more money for the precious cargo.

And it’s not just governments seeking to secure shipments.

It’s been claimed big industrial players such as US oilfield services company Halliburton are on deck in China, chasing supplies to buttress America’s health system.

Mr Forrest is one of few philanthropists on the scene.

Demand is so high that US-based industrial company 3M has lifted production of N95 masks from 400 million to a rate of 1.1 billion a year, and plans to increase further to 2 billion per annum by this time in 2021.

China ordinarily can produce 20 million face masks per day, about half the world’s capacity before the crisis, according to a study published in The Lancet medical journal.

“It requires a deep understanding of the Chinese market and it requires an ability to take risks,” Dr Burnell said.

“He [Mr Forrest] and we can make decisions quickly, while others have to go through chains.

“If you delay a few hours, the masks will be gone.

“What we’re trying to do, given the urgency for Australia, is work between the cracks.

“If France, the US and Germany are competing for 500 million masks in a factory somewhere, if we can get 3 million we’re doing those sorts of deals.

“This operation is just trying to focus on the immediate needs of frontline workers in WA.

“We hear a lot of things about the vulnerability, the fear, the angst people are feeling about a lack of equipment. We’re committed to do it as long as it takes.”

There are 12 people working on the project, including contractors and employees of Fortescue Metals Group, the iron ore miner Mr Forrest chairs.

Relationships and friendships mattered in China, Dr Burnell said, as competition was aggressive and getting worse.

Pinning down the right equipment was just one part of the challenge.

The second was the logistics of getting it out of China and into WA, with issues including moving through Chinese customs clearance.

Dr Burnell said prices for freight aircraft had increased about three-fold in a month.

Three flights landed in Perth in early April, the first of which was a China Eastern plane chartered by Minderoo.

While the procurement in China continues, the federal government has been running tenders for local production of masks and swabs, and many local businesses are taking action (see page 34).

The state government has undertaken its own procurement drive, ordering more than $15 million worth of clinical equipment in late March.

That was comprised of 301 ventilators, 201 humidifiers, 4,000 pulse oximeters to check oxygen levels in blood, and 200 intensive care beds plus their associated equipment.

The government said capacity was already being increased across the system by reconfiguring existing beds to enable them to take critical COVID-19 patients.

With Mr Forrest and others working to source equipment, AMA WA’s Dr Miller said the second big challenge was preparing the workforce for a surge in cases.

“Big hospitals have been training in teams, they’ve managed to divide their clinical staff into two separate streams so that one lot will be off for a week and the other lot will be on, and they can swap them over,” he said.

“All sorts of ways of trying to reduce transmission between healthcare workers.

“Clinical staff’s mental health has been taking a beating because of this constant anxiety around whether they will have the gear to do the job, and the training to do the job.”

Dr Miller said the other big concern was that much of the junior workforce had disappeared overseas.

Many were from the UK and Ireland and had been required to return to help the healthcare systems in those countries.

St John Ambulance WA is one healthcare organisation that acted early, setting up a pandemic preparation committee in January.

“The first thing we did was isolate our state operations centre, the triple zero centre,” she said.

“They’re in a confined space, they’re the heart of our operation, we knew we had to protect them.

Those phone operators have also changed their triaging process, for example asking callers if they have been overseas recently, to ensure first responders would have the right protective equipment when they interact with patients.

To ease anxiety in the workforce, Ms Fyfe said St John had focused on its communication across the organisation, with a web portal available for team members to keep them informed of accurate medical advice.

In addition, there was a focus on providing wellbeing and mental health support for staff, with a culture that would encourage people to reach out if in need of help and look after peers.

Physical upgrades have included repurposing three ambulances to be used only for COVID-19 patients.

Work is under way to refit more ambulances for regional WA.

Ms Fyfe said the organisation had been preparing for a worse case scenario from the beginning of the year.

“I’d prefer to be accused of overreacting than not being prepared,” she said.

Joondalup Health Campus, which is run in a public private partnership with Ramsay Health Care, took a number of passengers from the Artania cruise ship that had stopped at Fremantle.

The federal government has committed to contribute 50 per cent of funding to agreements between state governments and private hospitals to add capacity to the system.

That will mean private hospitals are integrated into the state’s management of the pandemic, and the government in return has promised to guarantee their viability after they cancelled elective surgeries.

But all that will require specifics to be negotiated with state governments, which had not been completed at time of writing. 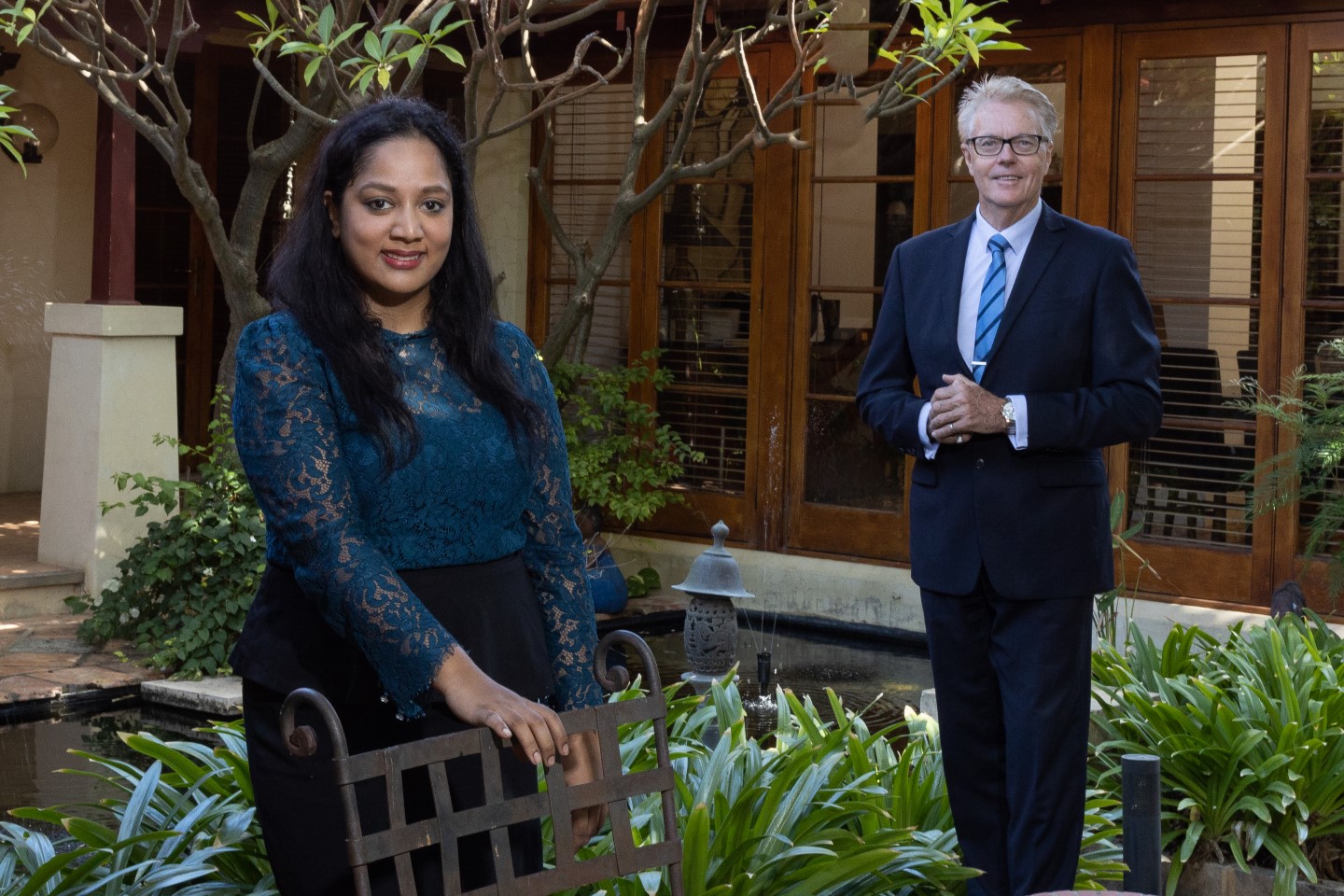 Warren Harding and Amitha Preetham believe telehealth can be used to take the battle against COVID-19 into the community. Photo: Gabriel Oliveira

There’s also a WA plan to use telehealth to monitor potential COVID-19 patients at home to reduce pressure on the healthcare system and stop transmission.

The plan is to use mobile devices and wearables to track vital signs for patients, including heart rate, blood oxygen levels and breathing.

It could also use geofencing to ensure people are quarantining.

Rather than having potential patients visit clinics, doctors will analyse cases remotely, via video.

A cheap, wearable device can then be delivered to the patient’s door, to be used in conjunction with a mobile phone.

“We need to also tackle it in the community, to support the work of COVID clinics or emergency departments,” Mr Harding said.

“It taps in to the capacity of Perth health providers in the community, and keeps [patients] in the home.

“When facing an extraordinary challenge like COVID-19, you won’t beat it by doing ordinary things.

“We’re going to have some new norms created.”

Health Integra director Amitha Preetham said a good example of how the system would work would be if a patient who returned from overseas was self-quarantining for 14 days and developed low-level symptoms.

“There’s a risk of transmission to other people in the GP waiting room, and many other patients will be visiting the doctor because they have other conditions such as diabetes,” Ms Preetham said.

That would help flatten the curve of infections, easing frontline capacity, and reduce the need for protective equipment.

Ms Preetham said it would be easy for people to use.

Over time, data will be collected and used to feed machine learning programs that will be trained to detect problems with patients early by picking up changes in vital signs.

It comes after the federal government announced a big expansion of telehealth in late March to ease pressure on frontline health clinics and reduce potential for transmission.

About $100 million was allocated to fund a new Medicare service for people in home isolation or quarantine over video and phone applications such as Skype.

The US and other countries are going in the same direction.

The Indo Asia Centre team is seeking about $500,000 in federal funding to get the project off the ground within weeks, with the state government offering support for the concept.

There has also been interest from resources companies to help support healthcare for fly-in, fly-out workers.

Longer term, the technology could be applied to aged care, or to monitor patients with chronic diseases and potentially exported if Australia gets in early to develop it, the centre said.

InteliCare has a prospectus in the market to raise $5.5 million for telehealth and artificial intelligence services in aged care.