Combination of factors behind automation drive 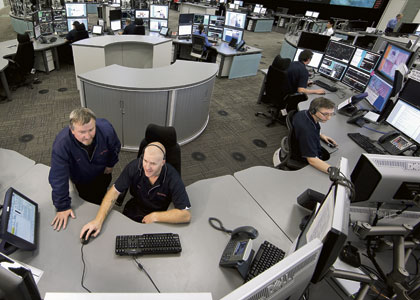 REMOTE SITE: Rio Tinto plans to have 150 driverless trucks over the next four years, all run from Perth. Photo: Rio Tinto

WESTERN Australia is rapidly emerging as a centre of excellence for mine automation, with resources demand for remote operated equipment spurred on by high wages costs, adherence to strict safety requirements, and the harsh working environment.

Led by Rio Tinto’s Mine of the Future project at the West Angelas iron ore mine in the Pilbara, mine automation is being adopted by BHP Billiton and Fortescue Metals Group at their WA iron ore mines, as well as the proposed operations at Hancock Prospecting’s Roy Hill joint venture.

BHP has dubbed its project IROC, allocating space at its new WA headquarters in Brookfield Place, while Roy Hill is developing a remote operations centre at the airport precinct where Rio Tinto has located its centre.

Rio Tinto’s project started in 2008, based on automated haul trucks in a research and development project, which included major truck manufacturer Komatsu. It plans to have at least 150 driverless trucks over the next four years, all run from Perth.

While automation is nothing new in manufacturing and processing industries, it is the resources sector that has tended to lead remote operations.

Oil and gas has long used automation to manage some types of offshore and deep-sea operations due to the expense and risk of human involvement.

A notable new innovator in the remote operations space has been the military and other government agencies through unmanned aerial vehicles. Locally, UAV manufacturer Cyber Technology operates in that market.

It is not just the transportation and logistics demands of mining companies that have tapped this market either.

Under the Transmin system, rock breakers at different crushing stations can be managed from one control centre; the system also sends signals to and from vehicles and plant equipment, which automatically retracts the rock breaker to avoid collisions and allows for continuous crushing operations.

“This is ripe for the natural resources industry; you might have the sensors already in the trucks, but this is about making sure the information is used very well, in terms of them linking to remote operations,” Ms Adam-Gedge said.

“We see remote operations advancing into what we call integrated operations, where we take the benefit of all that great technology, changes in work practices and business processes, and you can operate multi-platforms or multi-fields from one location, and you can go right across an organisation’s value chain and bring in vendors and customers and so forth.”

“This is the way of the future, and when you think how hard it is to get your hands on labour because these locations are difficult, remote and harsh.”