Political debate about coal power is boiling but economics and engineering will have a substantial impact. 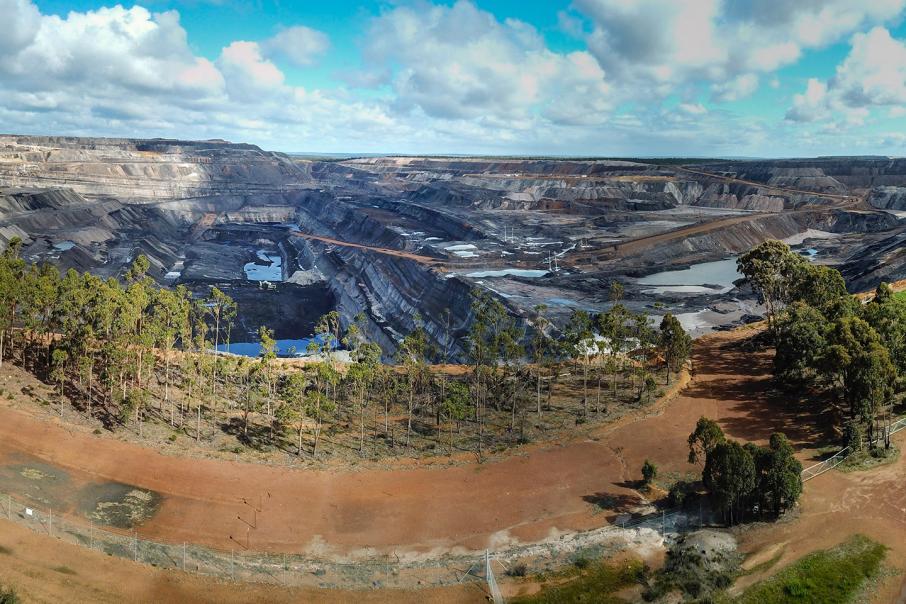 Western Australia is not a substantial producer of coal, so it was surprising that the fossil fuel played such a prominent role ahead of the state election in March.

The Liberal Party WA’s pre-election pitch included a commitment to shut down state-owned coal generation by 2025, removing about 739 megawatts of baseload capacity from the power grid ahead of schedule.

That number is in addition to the state government’s existing commitment to close Synergy’s two Muja C generating units, in October 2022 and October 2024, together generating about 388MW.

The government said the Muja C decision would save more than $350 million.

The ageing units were under increasing pressure from intermittent rooftop solar generation, needing to scale up and down to meet the market, contrary to their designed use.

The politics comes amid serious debate about a national net zero emissions policy for 2050, in response to concerns about climate change.

But an important issue with less transparency, which has nonetheless generated speculation in the energy sector, is the supply of coal into the power stations around Collie.

The issue is how much longer the state’s small coal mining industry can economically produce fuel for six of WA’s key baseload power stations.

One of the state’s two coal miners, Griffin Energy, declared a force majeure over winter, as a heavy rain season limited its ability to produce at its mine near Collie.

Business News understands the company’s Ewington deposit holds moisture more so than other deposits, and rainwater had been retained in the ground, making work unsafe.

Energy Minister Bill Johnston said the government was confident it would have sufficient power supply in the event of ongoing disruption.

“The state government hasn’t been advised how long Griffin expects to be out of operation, but we’d hope that they’ll be able to have a clear plan to get back into production as soon as possible,” Mr Johnston told Business News.

“The state government is confident Synergy’s coal requirements will be met, noting that Griffin does not supply coal to Synergy.

“The government has paid careful attention to any impacts on the electricity system and we’re very confident we have plenty of electricity supply, even if Bluewaters was to be disrupted by these current challenges.”

It is understood that customers had sourced coal through Collie’s other producer, Premier Coal, and mining has since restarted at Ewington.

An industry source said the demand had put strain on Premier, with the company’s otherwise sufficient coal stocks being reduced.

Bluewaters lodged an action against Griffin, claiming the miner had defaulted under coal supply agreements with unstable production levels.

The court battle has not proceeded further.

A spokesperson for Griffin told Business News at the time that it was widely known the business had been operating in an unsustainable manner, with revenue exceeding cost.

“A commercially sustainable coal price is required from its customers in order to continue to take Griffin Coal forward in a stable manner with no disruption to supply,” the spokesperson said.

Business News understands Bluewaters has a right to step in to operate the mine if its stockpile falls below 100,000 tonnes of coal, and an industry source has suggested the stockpile is now about 65,000t.

Griffin was bought by Indian interests through Lanco Infratech in 2010, with hopes to expand production from about 4mtpa at the time to about 18mtpa by 2018.

Lanco entered a complicated bankruptcy process about four years ago, and the miner is now controlled by Lanco’s main financier, ICICI.

There’s a history of court battles in this space, with Lanco claiming it overpaid for Griffin, alleging it was not given accurate data on coal reserves, an assertion reportedly settled out of court favourably to Lanco in 2018.

The most recent available annual report for Griffin showed it made a $40 million loss in the year to March 2018.

Nonetheless, Griffin is understood to be confident it has sufficient reserves to meet its commitments.

Longer term, it is understood the business hopes to secure investment for a coal-to-urea or brown hydrogen operation.

But equipment problems, an inability to source investment, and the consumption of the easiest, cheapest coal deposits presented challenges.

“All of the other easy access, all of the low-strip-ratio coal, is gone,” Mr Busson said.

“Their strip ratios are up.

“They’re talking about a 12-to-one strip ratio, that’s what I’m hearing from my members.

“Historically over the course of a mine in Collie, [it would be] nine to one.”

Griffin had also suffered a mechanical failure with a digger, which it had been unable to repair for some years, he said.

It now operates two diggers concentrating on one mining block, which leads to variations in output.

“I’ve been saying for a long time they surely can’t continue to go [on, but] they find some way,” Mr Busson said.

“It’s very worrying for the workforce there; they’re struggling for numbers currently, too.”

The CFMEU has been negotiating a new enterprise bargaining agreement with Griffin for about nine months, and Mr Busson said there was some way to go but progress was being made.

When asked about the level of coal reserves available, Mr Busson said there were reserves at other deposits south of Collie, in the Wilga Basin.

However, any move to mine them would face social licence challenges and would also require an upfront capital investment.

Mark Chatfield, who was formerly general manager of generation at Western Power, said he expected Collie’s coal reserves might last until 2040, but may be economically unviable prior to that.

“The Collie Basin is running out of coal, there’s no doubt,” he said.

Deposits were getting deeper and smaller, with less scale in production leading to higher costs.

“Both of the coal producers are heading to a region of being too small to be viable,” Mr Chatfield said.

A solution might be a merger, he said, which would support economies of scale to reduce costs, and optimise mine management for the two neighbouring businesses.

However, his biggest concern was around the Muja C power station being turned off, exposing the system to risk.

Mr Chatfield said Synergy needed to be clear about its plan to replace that capacity and should set that plan before any units were retired.

New gas generation would make sense, he said, because there was sufficient supply in WA and gas generators could more easily fluctuate output in a way that baseload coal could not.

Premier Coal has support from Synergy as its main client, aiding financial sustainability.

Nonetheless, it will face its own challenge when Synergy begins to shut off the Muja C power station, starting next year.

A spokesperson for Premier said the decision was not unexpected and was managed within the existing contract with Synergy.

The relationship provided Premier with operational security and met operational requirements for the Muja and Collie power stations, the spokesperson said, in addition to other local customers.

“Premier Coal anticipates that the business will remain economically sustainable over its remaining mine life, as demonstrated by its improved financial performance during 2020 due to productivity gains and cost reduction initiatives. “

This means information on the company is limited, but a few things can be deduced.

Wesfarmers had valued Premier Coal’s net assets at $156 million before selling the business to Yancoal in 2011 for $297 million.

Before the sale, Wesfarmers reported 138mt of proven and provable reserves in Premier’s books.

Yanzhou reported Premier entities had secured borrowings of $26.7 million at December 31 2020, at an 8.7 per cent interest rate.

Synergy is the main creditor to Premier.

Under a loan and coal supply agreement reported in Synergy’s books, a loan to Premier will convert to a 25 per cent equity stake at the end of the loan’s term unless it is repaid.

In 2014, the state government struck a deal to increase the price it pays for Premier’s coal, with then energy minister Mike Nahan saying a previous coal supply agreement had been signed in 2005 at uneconomic rates.

A further deal was negotiated in 2020, according to Premier’s annual reports, allowing upfront invoicing. 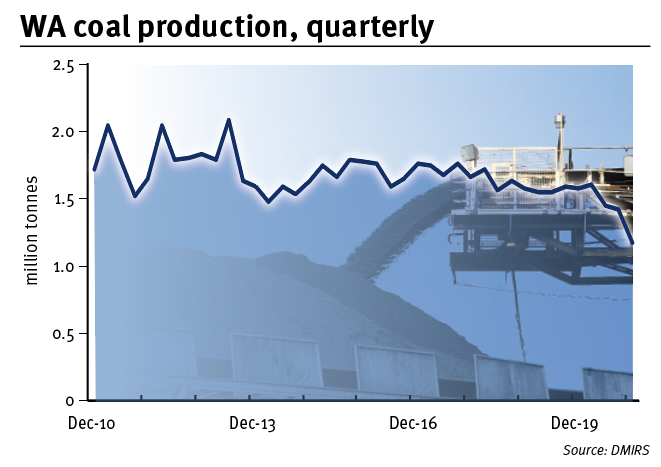 Those numbers are dwarfed by national figures, with about $54 billion exported in the year to June 2020, according to federal data, on about 450mtpa of saleable black coal production.

While it is not a big WA export industry, coalmining does support six baseload power stations.

Coal produced 42 per cent of the centrally dispatched electricity in the state’s main power grid in the week to September 16 2021, with gas supplying 37 per cent.

The state government’s Whole of System Plan modelling of the grid shows Synergy’s Muja D units are expected to operate until 2036 in every scenario.

The Collie G1 power station, the newest in Synergy’s fleet and the cheapest, is projected to continue production until 2040, when the modelling ends.

So are the two Bluewaters units.

In almost every scenario, Bluewaters or Collie 1 is expected to produce more power annually than any other individual generator on the network in 2040.

That indicates coal will continue to play a critical role in the network, making supply issues a big question.

However, the CFMEU’s Mr Busson said his members were expecting Muja D would close by 2030, and Collie G1 around 2035.

The government has been working on a just transition policy to support those workers, to bring new industry into Collie.

“I’m a glass-half-full bloke,” Mr Busson said, adding he believed it would be an opportunity for the town.

In the recent budget, the government allocated almost $400 million of subsidies pencilled in for Synergy in the 2022 financial year.

That includes $99 million for a system security transition payment, a new operating subsidy to help Synergy to run: “its thermal fleet in an uneconomical manner to preserve electricity system security whilst generation fleet transition options are explored”.

Synergy is budgeted to spend $40 million on capital expenditure at Muja and $34 million at Collie G1 over the next four years.

Separately, about $8 million was to be invested across the thermal fleet to deal with increased frequency of start-ups and operating at lower voltages.

The documents also show how substantially Synergy has been affected by the transition.

The enterprise had an estimated loss of $317 million for the 2021 financial year, with liabilities exceeding assets by $102 million.