Clontarf aiming for the big sticks as federal funding kicks in

The Aboriginal educator is chasing significant growth buoyed by a boost in federal government funding. 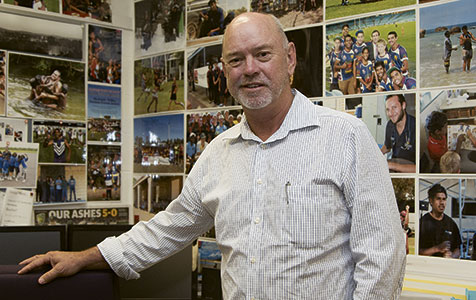 Gerard Neesham says the presence of a Clontarf academy in a town can have positive flow-through effects on the broader community. Photo: Attila Csaszar

Gerard Neesham is no stranger to adversity.

As inaugural coach of the Fremantle Dockers and later the founder of a football-focused Aboriginal education institute, he’s broken plenty of fresh ground on and off the field.

Mr Neesham’s latest plans for The Clontarf Foundation are no less ambitious – he wants to double the size of its operation within three years.

Mr Neesham and chairman Ross Kelly started the foundation in 2000 with a strategy of using the allure of AFL-focused academies to keep Aboriginal boys in school.

It has achieved significant growth since its formation and now runs programs in 55 schools across Australia catering to about 3,000 Aboriginal boys, something Mr Neesham was keen to discuss when he met with Business News.

“Before we went to Broome there were 47 boys in Broome High School, about 14 in year 8 and only one was getting through to year 12, with 55 per cent average attendance of those 47,” he said.

“That school now has 120 boys in it with 80 per cent attendance, so it’s changed demonstrably.”

As well as creating an attractive school environment, Clontarf supports its students through their journey as a young adult by providing health and lifestyle education, helping them find employment, and mentoring them for the years beyond.

The impact on surrounding communities is also evident. Mr Neesham points to Canarvon as an example, stating that car theft and burglary crime dropped 80 per cent in the first year the Clontarf academy was there.

To underscore its claims regarding those flow-through community outcomes, the foundation has commissioned Curtin University researchers to review its effect on communities. Mr Neesham said the results, while not yet publically available, were “extremely positive”.

Despite the foundation’s strong performance, however, it encountered difficulty maintaining its growth in 2013 due to funding challenges in the past financial year.

For the first year in a decade Clontarf failed to open a new academy in 2013, something it attributed to the federal government’s delay in the provision of recurrent funding, which provides a third of the foundation’s annual total.

But its growth plans are back on track following the government’s approval in mid-2013 to continue its $7 million recurrent annual funding to support Clontarf’s existing programs.

It also paid $4.5 million in seed funding to kick-start the foundation’s goal of doubling the number of boys enrolled in programs to 6,000.

Clontarf is now appealing to state and territory governments and the private sector to follow the federal government’s lead.

The organisation attracts the remaining two-thirds of its operating budget not covered by Commonwealth funds from the state and territory governments and the private sector.

While the federal government’s initial seed funding is secured, Clontarf said a further $7 million per year would be needed, which would also need to be matched by both state and territory governments across Australia and the private sector.

The Western Australian government is contributing $4 million over the current financial year, with plans for an increase to $4.4 million proposed for the 2016-17 financial year.

The New South Wales and South Australian governments are where most of the growth in state government funding pool is expected to come from as Clontarf focuses on expansion into those states.

Mr Neesham said the foundation was aiming to open six academies in NSW in 2014 and was also planning rapid expansion in South Australia with positive financial negotiations under way with the Liberal opposition in that state (which is tipped to win the March 15 election).

Mr Neesham said the last hurdle to those plans was convincing corporate and philanthropic entities that Clontarf was a worthy cause for social investment expenditure.

“The first phase that we have to tackle is convincing federal and state or territory governments that this is a better way to do business,” he said.

“And then we spend a lot of time going around to the private sector to convince them that this is a better place to invest.”

About $7 million of Clontarf’s annual revenue comes from more than 70 corporate and philanthropic entities including Wesfarmers, which Mr Neesham said had been a significant supporter since the foundation’s formation.

“They see that the program we’re running is a generational program; you can measure the results and see the change over the course of a generation.”

Total staff costs amounted to $14.8 million for the year ending December 2012, and were expected to be around that figure 2013.

“I have a very capable board who, in my case, have outsourced my remuneration to a professional company and they have independently come back with a recommendation which the board has accepted,” Mr Neesham said.

“All other senior staff member’s salaries are set against an education standard.

“People may think that we’ve got AFL stars or former AFL coaches like myself that get paid exorbitantly, but all our payment structures are based on the education system.”

Clontarf currently employs about 165 people, and Mr Neesham said it was quite capable of scaling up rapidly as planned, in part because of the calibre of the people already part of the organisation.

“People will question whether we’re capable of increasing at that rate (to 6,000 by 2017) but it is doable because we have very senior staff as regional managers … they’re very capable of opening up new academies without much external support,” he said.

“Scaling up hasn’t proved to be difficult in the past”.

Mr Neesham said there were only a few areas left in WA where academies could be opened before the foundation felt it had covered all the appropriate areas, which did not include remote communities.