Chevron Australia managing director Roy Krzywosinski says he remains wary about floating LNG technology but nonetheless predicts it will become more commonplace unless the costs of onshore developments are reduced. 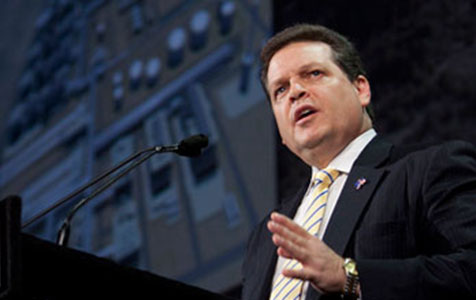 Chevron Australia managing director Roy Krzywosinski says he remains wary about floating LNG technology but nonetheless predicts it will become more commonplace unless the costs of onshore developments are reduced.

"Floating LNG, in my view, is an industry response to Australia's high-cost environment," Mr Krzywosinski said.

"Subsequently, it's not surprising that the energy industry is looking at innovative ways to reduce costs in the absence of any near-term signals that Australia is going to regain its global competitiveness.

"If the high-cost environment is not addressed then I suspect floating LNG will remain on the table for Australia."

Mr Krzywosinski acknowledged that governments were addressing some of industry's concerns through proposed policy reforms but said the nation faced an uphill battle to remain competitive, citing research showing project development costs in Australia were 30 per cent greater than for similar investments in North America.

He also criticised the state’s domestic gas reservation policy, which he said could act as a deterrant for future investment.

Despite this, he said Chevron would continue to take a cautious approach when it came to floating LNG technology.

"Chevron has no current proposals to use floating LNG but we do acknowledge that the technology has its place for smaller, more remote gas fields such as in our portfolio, the Exmouth basin," Mr Krzywosinski said.

"In our view there's still a lot more development work that needs to be done before we would characterise floating LNG as a proven technology."

Mr Krzywosinski said cost overruns at the Gorgon project, where construction costs increased from $43 billion to $52 billion, were largely due to lower-than-expected labour productivity.

Shell Australia boss Andrew Smith yesterday talked up the merits of floating LNG and defended his company's role in the Browse consortium's decision to walk away from an onshore gas development at James Price Point.

Chevron last year divested its stake in the Browse project in exchange for Shell's holdings in two licences in the Carnarvon Basin.