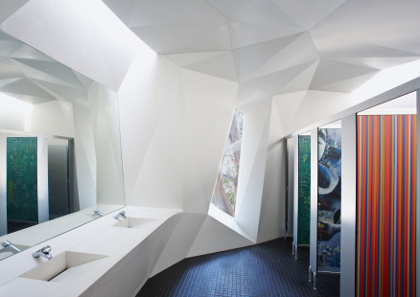 A highly innovative redesign and refit of public toilets opposite the Art Gallery has won Subiaco firm Conglio Ainsworth Architects one of the top prizes at the 2012 Institute of Architecture national awards.

The Subiaco firm was one of three WA winners at the national awards, held at the Midland Railway Workshop last night.

Coniglio Ainsworth won the Small Project Architecture award, for its refurbishment of the public toilets at the Perth Cultural Centre.

“We had to convince them on the whole design, because they didn’t expect this outcome at all.

“Their tender was literally ‘let’s put some tiles on the wall and make it look nicer,’ and we thought there was a bigger opportunity,” Mr Ainsworth said.

The amenities have angular white walls, and modern basins. Artworks are displayed on the walls of each cubicle with information about the price and the artist.

The judges of the award said the design echoed Kirt Schwitters’ sculpture The Merzbau and Robert Wiene’s film The Cabinet of Dr Caligari.

“We related it back to the Art Gallery, and introduced windows with a view of the surrounding sights, so you get nice natural light but also some passive security for the spaces,” Mr Ainsworth said.

“Previously those toilets were getting a lot of graffiti on a regular basis, and that’s now reduced significantly.”

Officer Woods Architects was commended for its sustainable design of a multiple housing development at 58 Stevens Street in Fremantle.

A commendation for urban design was awarded to Bernard Seeber Architects for the restoration and refurbishment of the Hilton Community Centre.

The national awards were held in WA for the first time in their 31-year history, and Mr Ainsworth said it was good that WA architects were being recognised for their work.

“WA has always had fabulous architects, and I don’t think the degree of recognition publicly to those architects has previously been good enough.”

Mr Ainsworth said WA had undergone a “fundamental shift” in the way the public viewed design and architecture.

“Perth as a city is becoming more design focussed, you can see a lot of changes in the central city that have altered the way those public spaces have been used.”