Catering for all styles & tastes 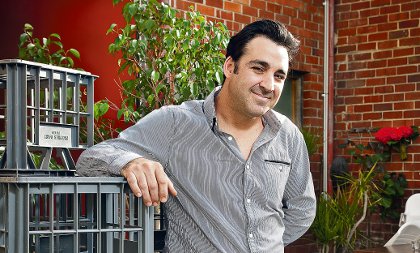 WIDE RANGE: Athan Mirmikidis (pictured) and Andrew Gaby have worked at keeping Heyder and Shears in style for the past 15 years. Photo: Grant Currall

PAVAROTTI and his maestro are among a long list of those for whom Heyder and Shears has catered during its 20 years, but co-owner Athan Mirmikidis says fame does not elevate a client’s importance.

He explains that catering isn’t just about the food, with he and his business partner Andrew Gaby having built Heyder and Shears on finely tailoring an event’s style and food to each client’s needs.

“We have been able to grow the business and not lose the edge we keep by making sure the client gets something that suits them. It is tailored for them; the last thing anyone wants is to be getting the same thing that someone else has had. They want something new,” Mr Mirmikidis told Gusto.

Their stylised offering is helped by the change in the marketplace since the pair took over the business in the mid 1990s.

“Perth has grown up, we are catering for people who are expecting a Melbourne standard of food,” Mr Mirmikidis says.

“The food is a lot more interesting and the style is slick. It’s not just a matter of putting out a lovely rustic platter of cheese; it has morphed into that higher standard. You can draw those elements in, but you have to present them in a modern format.”

Developing contemporary menus and keeping up with food trends is not the only concern for Heyder and Shears; expanding the business’ capabilities by getting a liquor licence and developing a recognisable style has been a major element in growing the business’ repertoire.

Heyder and Shears invests plenty of time and money getting the aesthetics right for functions, creating its style and brand for each event.

“It’s about the styles of simple things like cutlery, crockery, platters, platter wear and things you use to style your functions with,” Mr Mirmikidis says.

Managing the capital investment that goes along with that is challenging, however.

Over the years the partners have devised a number of methods to enable investment in new supplies. Suppliers are often willing to get in new products, while in extreme cases clients may want a specific item and be willing to pay for it, or the company will wear the full cost and plan to make a long-term gain.

“We do carry a lot of our own stuff because we want it to be ours and no-one else’s. We have a lot of small pieces so that when we dot a function it is our style ... it’s what we do,” Mr Mirmikidis says. “You have to buy smart so that what you buy will pay for itself.”

The nature of the catering industry means Heyder and Shears has to work doubly hard to retain a sense of its style and brand at any given event. Mr Mirmikidis says sometimes it is necessary to forsake the company’s own ideas to cater to a client’s style.

Some clients want a more traditional-style function and others want something ahead of current trends.

“If you were opening a restaurant and establishing a brand, you would sit there and calculate everything – buy the crockery, cutlery and that would be the style. In catering you are doing some stuff for clients you were doing two years ago, some stuff you are doing now and some stuff that shouldn’t be here until next year,” Mr Mirmikidis says.

“People still do love to have things that suit them, some love the old formula.

“You get clients who embrace new ideas and love them. They are unreal because they give you the potential to drive yourself.

“You have to keep ahead of it. You have to be the developing part of it, you inspire the future.”

Given the capital investment needed to run a successful catering business, Mr Mirmikidis says the past decade has been marked by an increased public awareness of the costs involved.

“Catering is more expensive than going to a restaurant. Everything is made for that event, all the attention is focused on the event, it is like setting up a restaurant everyday,” he says.

“People have embraced that now.”

Mr Mirmikidis was introduced to Heyder and Shears when serving at what was a typical event for the company – a boardroom lunch. The company’s events slowly evolved from the boardroom to corporate cocktail functions, private dinners and along to weddings.

The company is now on the preferred caterers’ list at many of Perth’s venues, including the Art Gallery of WA, and is the exclusive caterer at the WA Maritime Museum.

It now caters more than 1,000 events each year – a figure Mr Mirmikidis says may surprise the company’s clients given the business’ insistence on maintaining the tailored nature of its work.

Such demand for Heyder and Shears’ services could result from the company’s attitude to the number of people or minimum spend at a given function.

“There are caterers in the market that shut the door at 50 and won’t cater for any less than 50. There are caterers who set a dollar mark as a minimum spend. We don’t. If someone calls us up and wants a dinner party for six people in their house, we will do it,” Mr Mirmikidis says.

“You can’t turn your back on your corporate clients. They keep your wheels turning and provide you with your constant earn. If they ring up and want something miniscule, you will do it for them because they have been good to you so you have been good to them.”