Carrying the can for craft beer

SPECIAL REPORT: There’s a definite case of old school meets new school going on in the boutique brewing set, with aluminium cans increasingly the container of choice among the craft beer crowd. 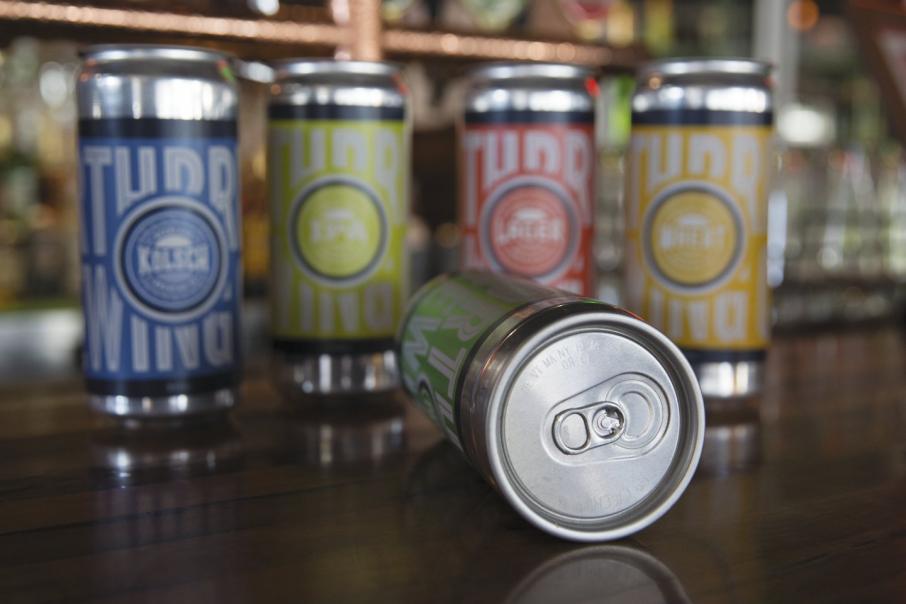 GAME CHANGER: At nearly one litre, the Canimal, seen here at Northbridge Brewing Company, gives punters the opportunity to get a takeaway of their favourite beer on tap. Photo: Attila Csaszar

There’s a definite case of old school meets new school going on in the boutique brewing set, with aluminium cans increasingly the container of choice among the craft beer crowd.

But the can as we knew it has evolved, with today’s tinny a big step up from the type earlier generations wrapped their mitts around.

The move to cans has been driven on two fronts – brewers looking for ways to supply new markets, like sporting events and music festivals, and bars and bottle shops seeking for new ways to get limited edition beer into the hands of punters.

And the cans themselves, which beer experts say deliver fresher beer less affected by sunlight or oxygen, are becoming increasingly innovative.

Margaret River’s Colonial Brewing Company has released cans where the whole lid comes off to give a drinker enhanced aroma when quaffing the beer, while Cheeky Monkey Brewery and Cidery is at it too, with its range of beers available in distinctive silver 500ml cans.

However, one of the biggest evolutions in beer packaging in recent years is the ‘Canimal’, a 946ml can filled from a normal beer tap, then sealed on-premise.

Big Can Suppliers Australia owner Allesandro Alberti, who sources and sells the cans from the US, said the Canimals were another indication of Australia following trends that originated in America, where more than 1,000 venues offered takeaways on tap.

Mr Alberti, who also works at Cellarbrations Superstore, said he’d recently been inundated with inquiries to order the cans, with venues from Perth to Margaret River, and even Indonesia, keen to buy the equipment.

“From a retailer’s point of view, we are able to sell takeaway tap beer to someone without convincing them to buy a growler for $30, which they have to make sure is clean and sterile every time they bring it back in,” Mr Alberti told Business News.

“For a brewery down south for example, which gets a lot of tourists coming through, they could actually buy a can and take it overseas.

“In a growler, once you put it on its side it will start leaking, but with a can, once it’s sealed, it’s easily mobile.

“With bars for example, you’ve got the Dutch Trading Co and Petition, they do growlers, but when people are going out, they don’t usually bring a growler with them.

“And if you’re still staying out, you don’t want to have to walk around with a growler. With a can, it’s just so much easier to be able to do a spontaneous buy and take it home.”

Innate Brewing head brewer Joel Nash described the concept of having tapped craft beer to take home from the pub as an “awesome idea”.

“There is something in the Canimals; a brewer like us could do a weekly drop of fresh cans to small bars around Perth; you wouldn’t get volume from it, but you would get a bit of buzz, having beer delivered directly from a brewery, fresh out of the bright tank.”

Later this year, Feral Brewing Company is planning to launch two of its beers – Sly Fox Summer Ale and War Hog IPA – in cans, albeit of the traditional 375ml variety.

“If you go to the pointy end of craft beer consumers, they are sold, but if you step back a little bit from the point, I’m not so sure,” Mr Varis said.

“For us, there are a couple of advantages.

“There are situations when you can’t take glass or you don’t want to take glass, and if people want to be able to enjoy craft beer, then we need to be doing it.

“That’s very much something that’s on the radar – music festivals, sporting events, all that kind of stuff, that was one of the motivators.

“I don’t think people are magically going to stop buying bottles and start buying cans just because we fill it into cans, but certainly all of those things give us a chance to be there if there is interest.”