CCC roars back in business

Two high-profile reports from the commission have reaffirmed its role in upholding public accountability. 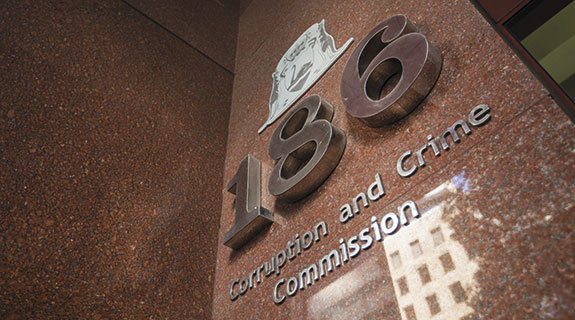 GOOD COP: The CCC was set up in 2003 and operates on a $32 million budget. Photo: Attila Csaszar

Two high-profile reports from the commission have reaffirmed its role in upholding public accountability.

The CCC’s recent report on events surrounding the demise of former treasurer Troy Buswell, after a drunken late night drive two years ago, and misleading attempts by his then chief-of-staff, Rachael Turnseck, to downplay the incident, make illuminating reading.

It comes after another high-profile report late last year on the travel activities of Lord Mayor Lisa Scaffidi, which centred on an expenses-paid trip to the Beijing Olympics in 2008, courtesy of BHP Billiton.

There’s nothing wrong with receiving an invitation for free travel, of course; it’s what you do next that matters. And it seems Ms Scaffidi sought to ‘camouflage’ (in the words of City of Perth Council CEO Frank Edwards) the invitation from some potentially hostile councillors.

The fact that the report was released mid-way through the council’s mayoral election campaign raised eyebrows.

Was the CCC under Mr McKechnie attempting to influence the result of the ballot?

Certainly not, said the commissioner. The report had been completed and it was incumbent on the CCC to release it, regardless of the ballot. In fact if it had delayed the release, the commission could have been accused of withholding important information for voters.

Ms Scaffidi was re-elected, of course, but her activities are still the subject of a Department of Local Government inquiry, which is now overdue, according to Premier Colin Barnett.

The travel issue has continued to dog Ms Scaffidi, and her recent reaction to questions from Channel Nine’s Liam Bartlett about her travel (that he had ‘bad breath’ and ‘botox’) were unworthy of a lord mayor.

The Buswell report raises questions about the relative merits of internal public service inquiries and those of the CCC.

Early information given by Mr Barnett to parliament in response to intense Labor Party questioning was wrong, according to the corruption report. The government had relied on Ms Turnseck, who had been at the event where Mr Buswell had apparently drunk too much, visited him the next day, and even lent him her government car to replace his smashed vehicle.

The story presented to parliament was that Mr Buswell was in a fragile mental state the day after. According to the CCC report, however, he had taken his two sons to lunch that day, and also retraced his earlier drive home, courtesy of Ms Turnseck, to check on damage he had caused.

The smokescreen was that Ms Turnseck was being loyal to her (then) boss.

If that was the case, she was obviously oblivious as to where her real duty lay. Sure, she was the senior adviser to the government’s key economic minister. But as often happens in the public sector, she forgot who paid her generous salary.

What is it about senior public servants and the widespread mentality to withhold information of public interest? Don’t they know that when stuff ups occur, as they do, it is far better to get on the front foot and come clean? That’s usually less painful than when the opposition and media come knocking on their door.

The CCC, which commands a $32 million budget and possesses sweeping powers, was set up in 2003 under Labor attorney general Jim McGinty. With retired judge Kevin Hammond as the inaugural commissioner, it conducted sensational early public hearings, including involving then lobbyist and former premier Brian Burke, who became known as ‘the man in the panama hat’ after one celebrated appearance.

The careers of several of Labor ministers in the government of Alan Carpenter crashed at CCC hearings as well.

When Mr Hammond retired early in 2007, the commission appeared to lose momentum; its role began to be seriously questioned. But that has all changed, thanks to Mr McKechnie’s appointment last April.

The former Crown prosecutor knows his way around. He was appointed the first director of public prosecutions in 1991, and he wasn’t immune to publicity. Then followed a 14-year stint on the Supreme Court bench where he was senior judge, general division.

Now he’s given the CCC a much needed shot in the arm. Perhaps just in time. The public sector is on notice.