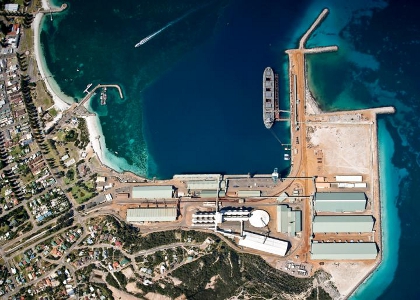 An aerial view of the Port of Esperance.

The state government is formally seeking partners to design, finance and construct a multi-user iron ore facility at the Port of Esperance.

Transport Minister Troy Buswell announced today that potential developers could apply for pre-qualification to participate in a request for proposal process.

Mr Buswell said proponents would be shortlisted and the successful applicant would be revealed later this year.

“All project funding and associated costs will be the responsibility of the private sector proponent ultimately selected through the RFP process,” he said in a statement.

The size of the expansion is yet to be determined, but a study released by the Yilgarn Iron Producers Association flagged a 10 million tonne per year upgrade would cost less than $200 million.

The port has a current capacity of 11.5 million tonnes per year.

The YIPA released a report earlier this month flagging an initial $550 million economic benefit from an expanded port at Esperance, as well as an expected $641 million flow-on effect to industry.

An additional 10 million tonnes per year mined from the Yilgarn region would contribute up to $95 million per year to state coffers, assuming the iron ore price remains around $120 per tonne, YIPA said.

Developers have until March 1 to register interest.

One miner set to benefit from the upgrade is Cazaly Resources, which welcomed Mr Buswell’s decision today, but urged the government to act quickly.

“Our Parker Range iron ore project has been waiting for some time for a viable Esperance port solution to it can be advanced to a development phase,” Cazaly managing director Clive Jones said.

“While we’ve been waiting for the state government to make a clear decision on Esperance, we’ve had to investigate other export options.

“Esperance remains our preferred port solution, but if Esperance isn’t developed in time, we may have to look elsewhere.

Mr Jones said hundreds of millions of dollars in infrastructure and development investment in the Yilgarn and Goldfields were dependent on a clear timetable for the Esperance Port expansion.

“Investors require certainty and transparency in the port development process and do not want any further delays caused by government indecision or bureaucratic confusion,” he said.