Canning Basin focussed hydrocarbon producer, Buru Energy, has spudded a new oil exploration well known as Miani 1, to the northwest of the company’s Blina oilfield, about 70km east of Derby, in the West Kimberley region of WA. The structure being targeted is well defined by 3D seismic and analogous to similar features in North America that hold major oil and gas accumulations, the company said. 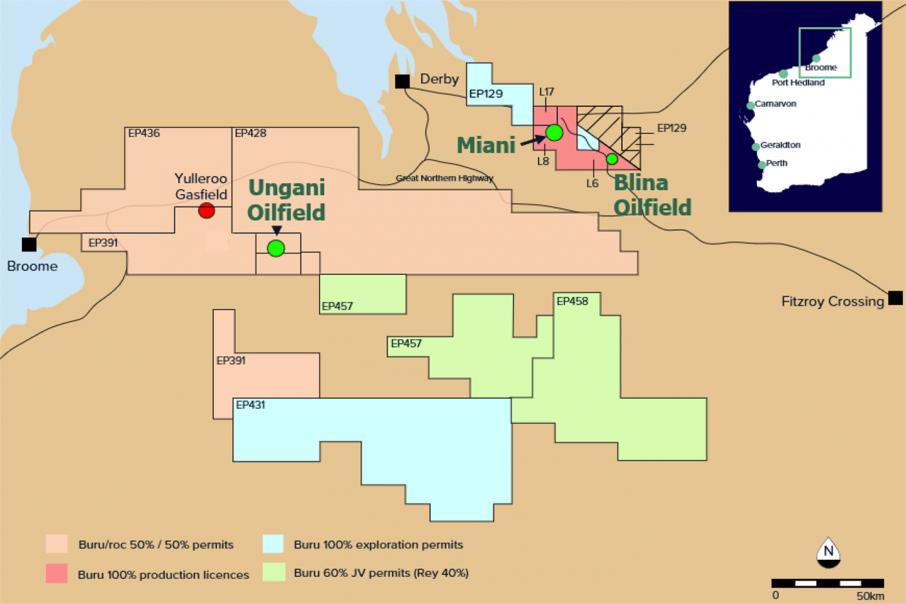 Canning Basin focussed hydrocarbon producer, Buru Energy, has spudded a new oil exploration well known as Miani 1, to the northwest of the company’s Blina oilfield, about 70km east of Derby, in the West Kimberley region of WA.

The well is being completed by the NGD 405 rig that most recently completed the Ungani 7H well, closer to Broome and the new vertical hole is planned to a relatively shallow depth of 2,400m.

Buru is seeking to intersect oil in a stratigraphic trap within reef-formed carbonate rocks.

The targeted structure is well defined by 3D seismic and is analogous to similar structural features in North America that hold major oil and gas accumulations, according to management.

Buru said that the feature being tested at Miani 1 has the potential to hold significant resources of conventional oil if it checks out.

The development of any oil that might be discovered could be facilitated by existing local infrastructure within a granted production licence, the company said.

Buru Executive Chairman Eric Streitberg said: “The Miani well is testing a new play type for the Canning Basin and for Australia, as the Canning Basin is believed to be the only area in onshore Australia where Devonian reefs have these features in a setting where they can be directly charged with oil.”

“There are also a number of similar structures in the area that will be very prospective targets if Miani is successful. The well is a relatively shallow vertical well with close offset wells that provide excellent control to reduce geological and operational risk.”

Buru Energy’s permits lie in the Canning Basin, a series of sedimentary geological units in the southwest Kimberley region some 2,300km north of Perth.

The Canning Basin is the largest sedimentary basin in WA, covering an area of some 530,000 square kilometres. It has similarities with some of the highly productive basins of the same geological age globally and is one of the few remaining areas in onshore Australia that is still under-explored for hydrocarbons.

The company holds the dominant position in the Canning Basin and in addition to the significant conventional Ungani Oilfield and the tight wet gas resources of the Laurel Formation, Buru Energy also has an extensive and highly prospective exploration portfolio covering oil and gas prospects that are well-defined on both 2D and 3D seismic.

The latter include the company’s fully-owned Blina oilfield holdings and ground to the northwest, where this week’s new Miani 1 well commenced.

The company is also a step closer to unlocking its tight gas portfolio in the basin after the Western Australian state government recently lifted the moratorium on hydraulic stimulation over existing petroleum titles.

The moratorium had been in place since September 2017 to allow for an independent scientific inquiry, which confirmed last year that hydraulic stimulation presented low risk if regulated appropriately.

Management said it believed that the current regulations provide a framework where hydraulic stimulation can be undertaken safely and without any significant environmental impacts.

While the company has agreed to exclude the Broome township and water supply areas in its existing titles as part of the Government’s delineation of the Dampier Peninsula as a “frac free zone”, it is now able to proceed with hydraulic stimulation on its remaining acreage.

It also carried out a trial hydraulic stimulation of the vertical Yulleroo-2 well, which flowed “sweet” gas with no hydrogen sulphides, negligible carbon dioxide and more than 10% associated liquified petroleum gas.

Outlining the potential, the company estimated that the Yulleroo gas field contained 2C contingent resources of about 714 petajoules of gas and 24.9 million barrels of associated liquids within the Laurel tight gas formation.

The Laurel formation is interpreted to contain a major basin-centred gas accumulation in the Canning Basin.

Whilst Buru’s current plans are focussed on unearthing the region’s conventional oil potential, including the Miani 1 well spudded this week, it has also flagged that it may drill a well to test the conventional gas resources at the Yulleroo gas field in the future.