Buru Energy will soon gain a clearer understanding of the Butler conventional oil and gas prospect that straddles both its EP 129 and Rey Resources’ EP 487 in the Canning Basin, northern WA. London-based Doriemus, who is earning a 50% interest in Rey’s permit, is preparing to drill the Butler-1 well to test the gross unrisked mean prospective resources of 3.14Tcf of gas and 42 million barrels of associated condensate. 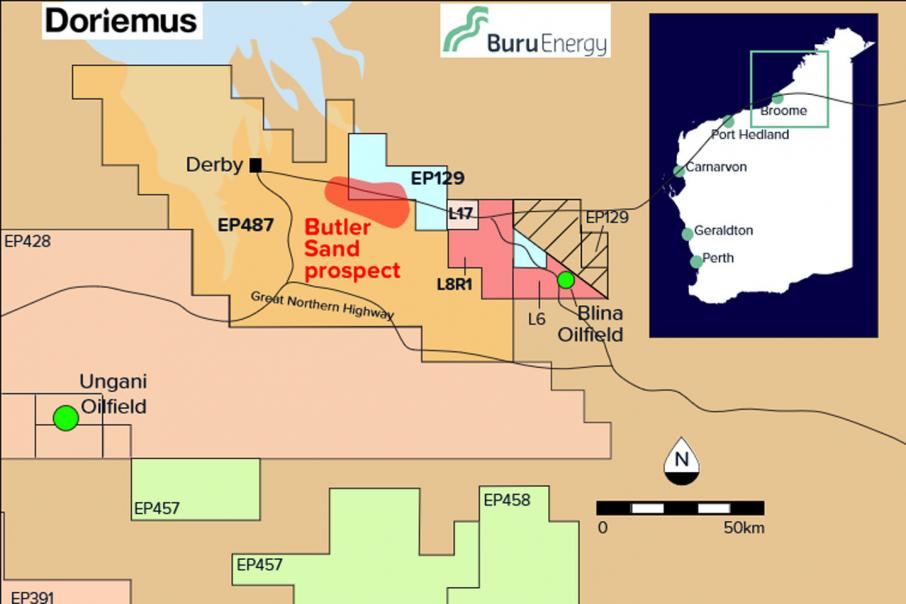 Canning Basin-focussed Buru Energy will soon have a clearer understanding of the oil and gas potential for one of its key prospects in WA’s north and it won’t even have to lift a finger.

That’s because London-based Doriemus is gearing up to drill the Butler-1 well to earn its 50% interest in Rey Resources’ EP 487 that is directly adjacent to Buru’s own EP 129.

The well will target the conventional Butler prospect, which by happy circumstance straddles both permits.

Butler is a large onshore stratigraphic trap that lies on the edge of the Lennard Shelf in the northern Canning Basin, southeast of Derby in WA.

An independent review of the conventional Butler prospect by specialist resource assessment consulting group ERC Equipoise, or “ERCE”, indicates that it could host gross unrisked mean prospective resources of 3.14 trillion cubic feet of gas and 42 million barrels of associated condensate.

If proven, this will put the prospect right at the forefront of Australia’s onshore gas fields.

While it is interpreted to lie at the top of the wet gas maturity window, there is also the potential for Butler to be oil-bearing as the adjacent Wattle 1 well recovered oil from a stratigraphically and structurally deeper sand formation.

The prospect also has similar physical characteristics to the “fan plays” that have been successful in hosting significant accumulations in Africa and Alaska.

The Butler-1 well could potentially be drilled by the Loc 405 rig that is due to drill Buru’s Ungani-6 development well shortly.

Buru Executive Chairman Eric Streitberg said: “The Butler area appears to have a very different Laurel Formation depositional history to other areas of the basin, with potential to have much coarser grained sediments and hence more porous and permeable reservoirs than elsewhere along the Lennard Shelf margin of the Fitzroy Trough.”

“We are very excited to have identified a play that we have been chasing in the Canning for some years and to now have a chance to get it tested, and will work closely with Doriemus to help them achieve their objective of getting the well drilled this year.”

Doriemus Chairman David Lenigas added: “The identification of the Butler Sand play provides an exploration target that could potentially deliver high flow rates and recoveries from good to excellent reservoir sands with potential resources that are more than sufficient to support a major gas and liquids development with low capital costs and low environmental impact.”

Should Butler-1 be successful, it would unlock one of the largest onshore gas fields in Australia, outstripping even the major Waitsia gas field in the Perth Basin which hosts just under 770 billion cubic feet of gas.

A gas discovery of more than 3Tcf in size would easily justify a new onshore gas development whilst any oil or condensate found could be the ticket to early commercialisation.

Any find by Doriemus and Rey would also require that Buru be brought into the party as more than half the prospective resources at Butler are actually contained within Buru’s existing permit.