Buru banks another $3.7m from BP for Canning Basin oil

Buru Energy has completed another 74,000 barrels crude oil lift from its Canning Basin acreage in Western Australia that will be shipped out of Wyndham port and sold to BP Singapore who will deliver it to a refinery in SE Asia. Buru will pick up a handy $3.7m for its 50 per cent share of the oil. 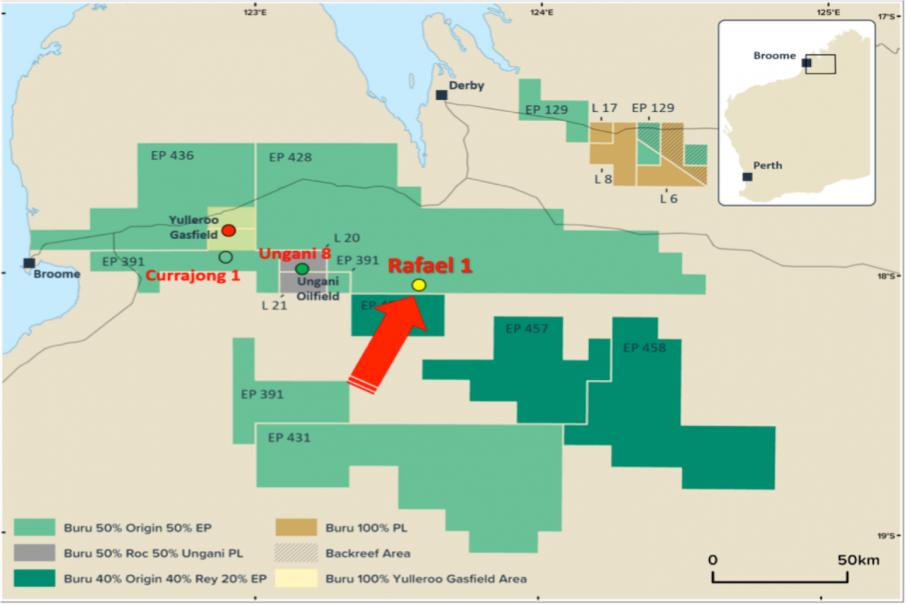 Buru acreage and operations in the Canning Basin Credit: File

Buru Energy has completed another 74,000 barrels crude oil lift from its Canning Basin acreage in WA that will be shipped out of Wyndham port and sold to BP Singapore who will deliver it to a refinery in SE Asia. Buru will pick up a handy $3.7m for its 50 per cent share of the oil.

Buru sells its Australian crude into Southeast Asia because Western Australia no longer has a refinery following the closing of BP's Kwinana plant that had operated for 65 years. According to BP, it could no longer compete with larger more modern refineries throughout Asia and the Middle East. The BP refinery was constructed in Western Australia after Iran nationalised all domestic oil operations in 1951 and at its peak, the operation employed some 650 people in Kwinana.

With the purchase price of Buru's oil production a fixed differential to average dated Brent crude for October, the latest lifting will provide a strong cash inflow for Buru courtesy of its Ungani project in WA’s revered Canning hydrocarbon basin. Today, the price of Brent Crude stands at a lofty US$83.22, a price not achieved since 2018. Brent is indexed in US dollars providing Australian producer Buru with an extra kick due to the relatively low value of the Australian dollar today of US$0.73

The Ungani oilfield continues to produce a steady 800 bbls/day from a highly porous and permeable dolomite reservoir. The Ungani field is located some 90km east of Broome within the Great Sandy Desert. The area of operations is dominated by rangelands with large cattle grazing properties over most of the area.  Roads within Buru’s Canning Basin operations are all weather and State and National roads leading to Port Wyndham are all bitumen. Oil is trucked to the Port of Wyndham where it is stored in an 80,000-barrel tank. From Wyndham the oil is purchased free on board by BP Singapore Pty Ltd and shipped to South East Asian refineries.

Buru continues this season’s drilling campaign at the much-anticipated world-scale Rafael 1 prospect. According to the company, Rafael could hold a mean prospective resource of 69 million barrels of oil with a high side potential of 176 million barrels. Today’s Rafael operation is drilling ahead and approaching the much-vaunted new geological target of Devonian aged carbonates that are similar to large prolific oil producers in Western Canada, as interpreted by Buru.  Rafael 1 is located about 50 kilometres east of the Ungani oilfield and 150km east of Broome.

The next well on Buru's busy drilling schedule is an extension of the Ungani oil field at Ungani 8. The company says it expects the Ungani 8 well to intersect a potentially undrained fault block and the well is designed as a horizontal well providing a longer intersection with the target reservoir section.

Company management says its 2021 1,100km 2D seismic program is nearing completion with no significant incidents to date and good quality seismic data reported from the field crew. According to the company, highly prospective new plays will be revealed with the new seismic data.

Buru remains the dominant exploration leaseholder in the revered Canning Basin with its diverse portfolio of prospects.  Farmins from ROC and Origin have bolstered Buru's position and a recent $15m capital raise has given it a shot in the arm and enabled it to carry on its work in the desert. With a market cap of $70m, $35m cash in hand, no debt and an income from the Ungani Oilfield, Buru looks strong enough to weather any desert storm now.