Buru Energy and its newest JV partner, ASX-listed mining and energy giant, Mineral Resources, have been awarded a new onshore oil and gas exploration license in WA’s Mid West to target traditional oil and gas plays in the area by targeting the deeper, under-explored rock formations of a similar geological age to Buru’s established targets to the north in the state’s Canning Basin. 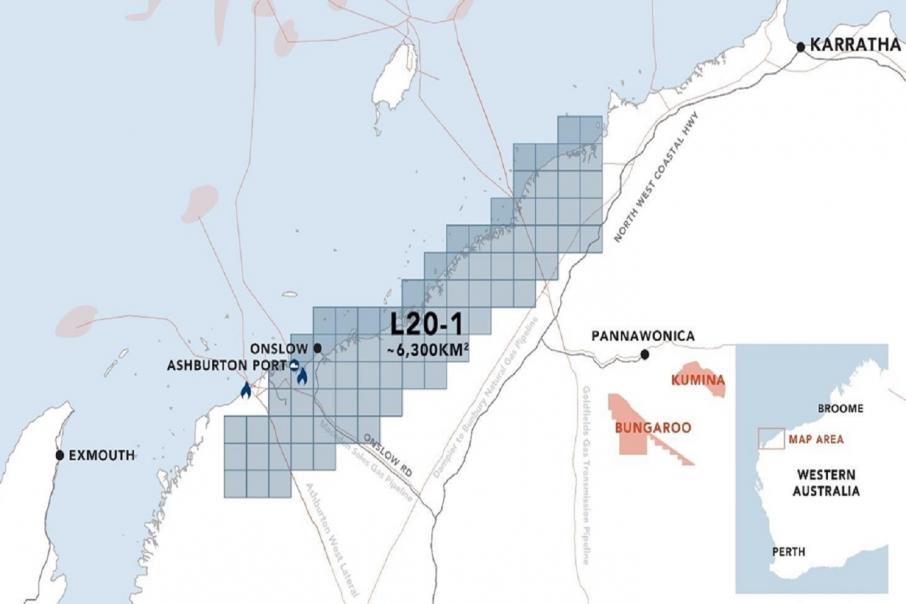 Buru Energy and its newest JV partner, ASX-listed mining and energy giant, Mineral Resources, have been awarded a new onshore oil and gas exploration license in WA’s Mid West to target traditional oil and gas plays in the area and the deeper, under-explored rock formations of a similar geological age to Buru’s established targets to the north in the state’s Canning Basin.

The two companies will split any spoils they discover equally as each company will hold a 50 per cent interest in the new onshore title which sits west on the mining town of Pannawonica.

The new exploration permit wanders along the coast, from Cape Preston near Karratha in the north, through the town of Onslow and Chevron’s Wheatstone LNG plant area, to Tubrigi Point in the south.

Buru’s fresh ground is strategically located adjacent to a plethora of oil and gas infrastructure, including the historical Tubrigi gas field which is currently used as a gas storage facility.

Interestingly, the permit includes the old Mardie-1 drill hole which found sniffs of oil just a few hundred metres below ground back in the early days of exploration in Western Australia’s revered Northern Carnarvon Basin.

The Mardie-1 test hole was drilled around the same time as the discovery of the 300-million-barrel Barrow Island oil field which sits just off the coast from Buru’s new ground.  Back in the mid-1960s, the small flow of oil from the Mardie-1 drill hole was not robust enough to be commercial.

Whilst the new ground has potential for new oil and gas discoveries in the traditional Cretaceous and Jurassic-aged target horizons of the Northern Carnarvon Basin, the area is also prospective for oil and gas in the deeper, under-explored rock formations which are of a similar age to its established targets to the north in the State’s Canning Basin.

The Ungani oil field east of Broome provides the bulk of Buru’s cash flow at the moment. The oil at Ungani is produced from Devonian and Carboniferous-aged rock formations, similar to those known to exist in Buru’s new Mid West ground.

An added bonus may be the Triassic-aged rocks which are also known to exist on the western flanks of the new license. According to the company they are thought to have similarities to the rock strata in which Carnarvon Petroleum and its operating partner, Santos, found the Dorado oil field just a couple of years ago.

Buru Energy Executive Chairman, Eric Streitberg said: “We are delighted that we have been able to apply our hard-earned Canning Basin geological knowledge and operating experience to a new area close to existing infrastructure. We are equally delighted to have been joined in the application by Mineral Resources which has an outstanding reputation for bringing projects to fruition on budget and on time.

“This new exploration area complements our Canning Basin areas where we are about to start an exciting drilling program and we look forward to working with the various stakeholders in this new area, and getting boots on the ground to find some oil and gas.”

The 6,293 square kilometre license the subject of Buru and Mineral Resources application is adjacent to MinRes’ proposed Ashburton infrastructure development that includes the Bungaroo and Kumina mining projects near Pannawonica.

Whilst North West Shelf gas is steadily flowing down the Dampier to Bunbury gas pipeline which sits adjacent to WA’s North West Coastal Highway which means Buru and MinRes are well placed to move any gas molecules they may uncover in years to come.

“We are fully committed to achieving Net Zero Emissions before 2050 and believe owning our own natural gas supply will complement the significant advances we are making in renewable energy, particular around solar power.”

Both Buru and MinRes remain coy about what work program is likely to be undertaken once the JV get its boots on the ground however the new license will no doubt keep Buru’s hydrocarbon experts busy when they get washed out of the Canning Basin each year by the wet season.

With Origin already on the hook up in Buru’s old stomping ground east of Broome and MinRes hooked into its new Pilbara ground, Buru looks to have a couple of energy heavyweights to help it monetise any gas each JV may discover in the coming months and years.

The market seems to think so too, with punters marking Buru up 19 per cent in intra-day trade.