Buckle up – growth to hit the skids

Westpac’s latest national economic analysis tips a slowdown in growth, something for which it seems not many are prepared. 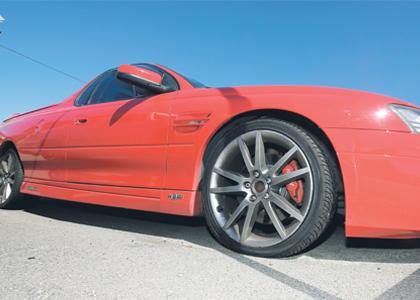 HITTING THE WALL: The brakes may soon be jammed on the state’s high-speed economy, with a Westpac analysis tipping a collapse in the resources project pipeline and a shaky finish to the year ahead. Photo: Bohdan Warchomij

Westpac’s latest national economic analysis tips a slowdown in growth, something for which it seems not many are prepared.

WHAT’S the difference between an economy growing at a breakneck 6.7 per cent a year and one growing at a relatively sedate 3.4 per cent? No need to guess, because if you live in Western Australia you might soon find out, because a big slowdown is on the way.

Westpac Bank is the latest well-credentialled organisation to tip an abrupt end to the mining-investment boom, which has made WA the envy of all other Australian states.

It is also the first to put specific numbers on what the end of the boom might feel like, with that fall from annual economic growth at 6.7 per cent last year to 3.4 per cent next year the equivalent to what it feels like when the driver of a high-speed car jams his foot on the brakes.

The car - or in this case the WA economy - is still moving forward, but passengers will feel a sharp pain because their bodies (and spending habits) will have retained the inertia of the high-speed dash and most will have left prudent trimming of budgets too late to avoid harsh cut-backs.

Personal debt levels for many people, especially the ‘cashed-up bogans’ (CUBs) who have taken on big bank loans to buy a house they could not normally afford, or a high-spec Holden V8, have risen sharply in Perth over the past few years of dramatically above-trend growth and wage rates.

At the height of the boom last year -and well before older and wiser heads could sniff the change in the air, and BHP Billiton, Rio Tinto and Fortescue Metals had started their cost-cutting campaigns - the CUBs were spending as if there was no tomorrow.

Next year, according to Westpac in its latest ‘Coast-to-Coast’ analysis of the Australian economy, will bring a significant slowdown, a collapse in the resources project pipeline, a sharp fall in job creation and hours worked, and an overall decline in wages growth; all of which will make servicing housing and car loans substantially more difficult.

First signs of the slowdown, which will not, however, be the end of the world as we know it, can be measured in an abrupt fall in the value of retail sales; WA’s fabulous monthly expansion last year of around 0.9 per cent (equivalent to 10.8 per cent annually) has already fallen back to the national trend of a fraction over 0 per cent.

It is the deceleration back to a sort of national normality that people in WA will feel acutely after the heady days of the boom, which lifted Gross State Product per person in WA to $100,000, with the nearest competitor being NSW with GSP per head of $62,000.

By almost every measure, WA has outstripped everywhere else, with the state’s population of just 10.6 per cent of the country producing 40 per cent of its exports.

The game of rapid growth is coming to an end, as all booms do, with Westpac noting that WA had another record year in calendar 2013, “but with a very shaky finish” brought on by lower commodity prices and project investment deferrals.

It is possible that Westpac’s cautionary outlook is too pessimistic, but given the bank’s extensive exposure to business and personal customers in WA it would be unwise to write-off the concern implied in its forecasts, which are markedly more downbeat than official government economic forecasts.

In the current financial year to June 30, Westpac expects WA to grow (as measured by GSP) at 5.8 per cent, down the best part of 1 percentage point (or 13 per cent) on last year’s record-breaking 6.7 per cent. The government forecast for the current year is 6 per cent.

Next financial year, Westpac reckons WA’s growth with slow to an annual rate of 3.4 per cent compared with government forecasts of a 5 per cent growth rate.

In the real economy of jobs and mortgages, the difference between 3.4 per cent and 5 per cent is significant; and while it might never happen, and while WA will still be growing faster than the bank’s all-Australia growthforecast of 2.4 per cent for next year, it would be wise to start preparing for the WA economic skyrocket’s return to planet Earth.

AT risk of giving some readers a fright, it is timely for retailers to take note of the latest trend in their business - it’s called opening a shop.

If anybody had said that 10 years ago they would have been laughed at, because there really wasn’t any other way of providing a retail service than through a shop.

It all changed with the rise of internet retailing, which virtually wiped out a number of traditional shop-based businesses, including music and book shops.

Today, there’s a 180-degree switch under way again, with big-name internet retailers in the US and Europe adding what they call a ‘multi-channel experience’ to their electronic sales division - an experience you would call a shop.

Examples of what’s happening include an internet-based plumbing supplies business in Britain called Screwfix, which has found that its clients want both the convenience of internet trawling to identify the parts they require and the ease of calling by to a newly opened Screwfix shop to pick up the materials.

In a way it’s the retailing sector flipping around the trend of recent years for traditional shops to develop an internet offering; now we have a pure internet business realising the value of a shop frontage.

Once it was called a ‘bricks and clicks’ solution. Now it’s clicks and bricks. Tomorrow it will be called retail convergence.

SOMEONE had to say it, and that’s just what Cynthia Carroll, the outgoing chief executive of mining giant Anglo American did last week when she told investors that they were being too greedy in expecting the mining industry to pay ever-higher dividends.

“Some shareholders are under pressure and want a return tomorrow,” she said, before delivering her punch line: “The industry has changed and maybe the shareholder base must also change”, which is code for ‘if you’re not happy with your investment, please sell and put your money somewhere else’.

‘The state is an instrument in the hands of the ruling class for suppressing the resistance of its class enemies.”
Joseph Stalin