Mining services company Breight Group has established a specialist training centre in Belmont to lift the skill level of workers undertaking maintenance and shutdowns on mine sites. 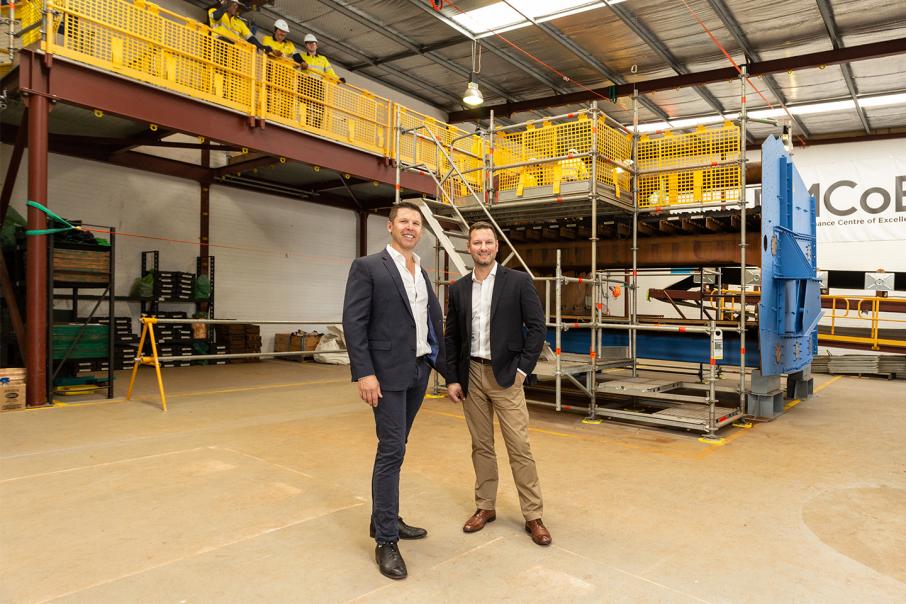 Stephen Easterbrook (L) with Dominic Barlow at their training centre.

Mining services company Breight Group has established a specialist training centre in Belmont to lift the skill level of workers undertaking maintenance and shutdowns on mine sites.

Director Stephen Easterbrook said the resource maintenance centre of excellence, to be known as Breight Education, was a first of its kind for Australia.

It’s fitted out with vibrating screens, transfer chutes and conveyors so that workers preparing to go to site can be trained on the same equipment they will be servicing.

“People can arrive on mine sites with limited knowledge of the equipment they are servicing,” Mr Easterbrook said.

Jointly led by Mr Easterbrook and co-director Dominic Barlow, the group was formerly known as Pilbara Access, which specialised in scaffolding and rope access, and has extensive experience in training people in scaffolding and height safety.

The change of name was associated with the diversification into mechanical and renewable services, from projects to routine servicing and construction.

“The move into mechanical services was a natural progression for the business, while the training centre now enables technicians to perform at their best incorporating lean practices,” Mr Barlow said.

“We have been working on this business model and growth opportunity for over 12
months.”

Mr Easterbrook said establishing the centre of excellence was a priority, as clients wanted to engage workers with better skills on their shutdowns and maintenance activities.

“We have engaged some of industry’s best subject matter experts in the mining and resources field to implement what we believe, and industry is telling us, is a unique approach to partnering with our clients.”

The group’s approach is bearing fruit, with Breight recently awarded a five-year contract with Newmont Goldcorp for the provision of access services, including scaffolding and rope
access.

This adds to Breight’s contracts with several major mining and energy companies.

With about 500 staff on its books, Breight is ranked as number 17 on the BNiQ ranking of contractors in Western Australia, on par with Southern Cross Electrical Engineering.

Mr Easterbrook, who was a 40under40 award winner in 2009, said the group was focused on unlocking value for clients in a dynamic manner

“It’s about being smarter, safer and more efficient,” he said.

He explained that one of the best ways to deliver value was to cut the duration of shutdowns, which allowed clients to stay in production longer.

Breight’s increased investment in training comes amidst continued discussion about the risk of a skilled labour shortage, as several big iron ore projects in the Pilbara ramp up.

Mr Easterbrook believes the growing use of labour hire firms in the sector has exacerbated issues around lack of training and preparation of people.

He said the challenge was not a shortage of people, but rather the gap in relevant meaningful industry training.