Breaking away from old-world thinking

Could we put Perth’s natural north-south divide to better use for testing ideas? 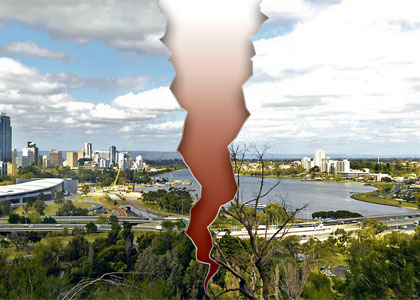 Could we put Perth’s natural north-south divide to better use for testing ideas?

HAVE we missed a great chance to use our unique city’s isolation to experiment with the best ways to structure our community?

In recent weeks, WA Business News has published a fair amount of material on public transport, including Transport Minister Troy Buswell’s commitment to a light rail option servicing the north-eastern corridor, albeit without a great deal of detail on timing or funding.

The Committee for Perth has backed the light rail option in its recent report on Perth, ‘Towards a Bright Future’, and its CEO Marion Fulker wrote to us espousing this form of public transport.

That was, in part, a response to the views we published of former town planner and architect Bruce Tomlinson, who was critical of the process that decided to create the Perth-to-Mandurah railway.

Mr Tomlinson said the line failed to live up to the promises made when it was launched, replacing a proposed bus way. Ideology can capture public transport planning, he said, pushing to one side the logical, dispassionate and cost-effective approach to such development.

I can’t help thinking that there is a clash of thinking here that cannot be solved with argument – it requires experimentation.

In essence, we see here the battle between the European way and the American way. While that may be a bit simplistic, Europe’s cities were developed before the car came of age, when rail emerged first as the most efficient mass transport option. In the US, on the other hand, many cities have grown up around highways.

I have spent time in both. There is no doubt that as a traveller and, 20 years ago, as young professional working in London, commuter train networks were convenient and easy to use.

However urban train networks run into challenges in suburbia, even in Europe, let alone spread-out Perth.

I am not opposed to a tram network of the kind found in Europe and places like Portland in the US, but I am cautious.

Trams might be romantic reminders of our youthful experiences on the continent and make us feel like we are catching up with those more sophisticated places, but I’m not convinced such options are always the answer. There are plenty of places I have seen where trams appear to be just quaint reminders that these places have not moved on; you only have to visit Portugal or South America to experience this.

I have also spent time in Asia, where in some countries the mainly privatised bus networks work incredibly efficiently, as small coasters feed large coaches, which in turn feed smaller buses at the other end.

Buses and trains can work like this too, but in a city like Perth, buses can also offer end-to-end solutions that trains can’t match.

Perhaps we ought to have two policies for public transport to take advantage of Perth’s unique geography, isolation and prosperity. The Swan River is a formidable transport obstacle that neatly divides the city. It forces most of our traffic and public transport across a handful of narrow crossings, making us vulnerable to problems of congestion ahead of our time.

Imagine if, a decade ago, our leaders had left a bus way running south to Mandurah. We would now have 10 years’ worth of data and experience comparing the efficiency of the buses to the south versus rail to the north.

Arguably, public transport is just one realm where the Europe versus US style of development might have been played out in a live experiment.

Housing is another. There is a bitter debate about infill and sprawl that crosses similar lines. Europe and some older US cities have been contained and people squeezed into them as they have grown increasingly dense. Newer US cities have sprawled, just as Australian cities have.

Look for housing affordability and you’ll find it where sprawl is least contained.

Perhaps the same logic could be applied to Perth. The south could be allowed to sprawl, while the north could be filled in and made denser.

You could go way beyond that and extend this approach to a raft of other policy areas like education, health, policing and even, dare I say it, taxation.

All of these policy areas would have but one measure of success – outcomes. And if, after an agreed period of time, one outcome was marginally lower than another but at much less cost, we might see that there are opportunities to adopt and change the alternative methodology – albeit with all the humiliation that comes with losing an ideological battle.

I realise this would be a challenge to centralists who like to impose their view of what works on everyone else, but at least it would establish a true experiment for demographers rather than Europe versus America, which has too much historical baggage to make honest comparisons.

The outcome would be fascinating and much more real to Perth residents than any comparison between Frankfurt and Chicago.

It would be much more real not only because the underlying cultural differences between north and south of the Swan River are much too fine to affect the experiment, but also because people would be able to shift between these locations.

You could even experiment with local government. One region, say the south, could be governed by a big city council like Brisbane is, while the north could remain fragmented as the whole of Perth is today.

People vote with their feet and, as long as the two parts of Perth did not take their rivalry so far as to put barriers to movement in place (a Berlin Wall-equivalent at The Narrows Bridge?), then that would help accelerate the results of such an experiment.

Perhaps it is too late for such an idea to work in terms of railway lines. And the lack of a CBD south of the river would hinder this experiment, unless the northern end of South Perth was allowed to become office oriented. Of course, the south might chose to find a new commercial heart – one that was chosen through a process that was logical, dispassionate and cost effective.

After all, Perth’s CBD was selected for reasons that no longer apply in the 21st century – it was a logistics hub along the river that was a key piece of transport infrastructure and located well inland, making it easier to defend from naval attack by rival nations.

Nevertheless, more than 100 years ago, this nation’s founding leaders established Australia as a federation on the basis that centralised control doesn’t work for everyone.

Maybe we should look at taking such an approach to problem solving at a more localised level.