Kalia Limited’s preliminary interpretation of new geophysical data over its Mt Tore JV tenements located on Bougainville Island in PNG has identified intrusive geological complexes and structural pathways for potential mineralisation. Imagery produced from the survey data is being used by Kalia personnel on-site for the generation of new exploration targets. 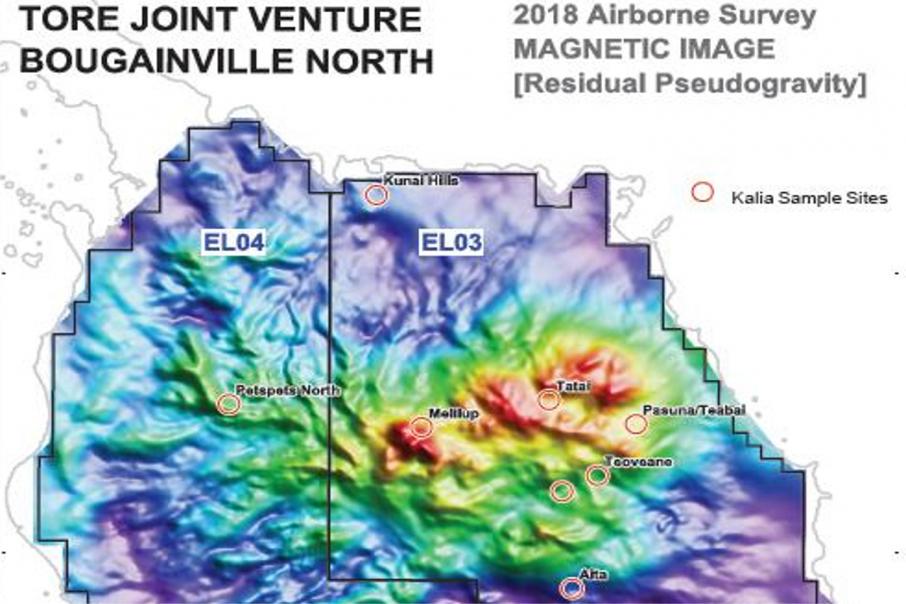 Kalia Limited has completed a detailed and highly anticipated geophysical survey program over the Mt Tore JV tenements located at the northern end of mineral-rich Bougainville Island in PNG.

According to the company, an initial review of the geophysical data identified deep seated, intrusive geological complexes and potential structural pathways for the sought after base and precious metal mineralisation.

Preliminary imagery of the survey data has been created and is currently being used by Kalia personnel on-site to commence generation of potential new exploration targets.

The magnetic data response apparently coincides well with the topography in this part of the island, which Kalia believes is representative of the thickness of the in-situ volcanic units – being thicker in the easternmost EL03 tenement and thinner in excised river valleys elsewhere.

The company’s Technical Director Peter Batten said: “2019 has commenced with fieldwork in EL03 toward the Teoveane - Puspa target with work scheduled to focus there and at Melilup this month.”

“… this new dataset will provide an excellent insight into the geology and structural framework of the project area and assist with optimizing on-ground target follow-up.”

“This will allow the team to more accurately plan for expeditions onto known targets and is especially important for EL04 where the complete lack of geophysical data has previously hampered effective exploration activities.”

According to management, the recent geophysical survey was the first conducted on Bougainville since 1987 and has much better spatial resolution and a fuller coverage than the earlier work.

Kalia has a 75% managing interest in the Tore Joint Venture Limited or “TJV” exploration licences on Bougainville.

The incredible prospectivity of Bougainville is well known with the mothballed Panguna Mine, which still retains an amazing 1.8 billion tonne JORC-compliant mineral resource at 0.3% copper and 0.34g/t gold, serving as a signpost of the island’s potential mineral endowment.

The two Kalia-held exploration licences were the first tenements issued to a non-Bougainvillean entity after the lifting of the moratorium on mining activity by the Autonomous Bougainville Government in May 2017.

Kalia appears to have integrated well with the local communities and its 75/25 JV with local landholders will be held up as the new mining model on Bougainville if Kalia can get its project off the ground.

Generation of new exploration targets from the $1 million investment in the geophysical survey work and interpretation are expected to drop out shortly, with the company anticipating to define additional prospectivity in areas of its tenement holdings never previously surveyed.

With a solid foundation established in the community and the landowner base, Kalia, through the TJV, is poised to start delivering regular assay results from its exploration field work in 2019.

The company is building up a plethora of new geological data on Bougainville that could throw up a treasure trove of exploratory targets over its large land holding on the island.

That this mineral rich province has been off the radar for so long makes the company’s activities very interesting and something of a frontier exploration play, where anything of any size could potentially be unearthed.