The dynamic of Perth’s apartment market is changing quickly, with the big developers poised to take advantage. 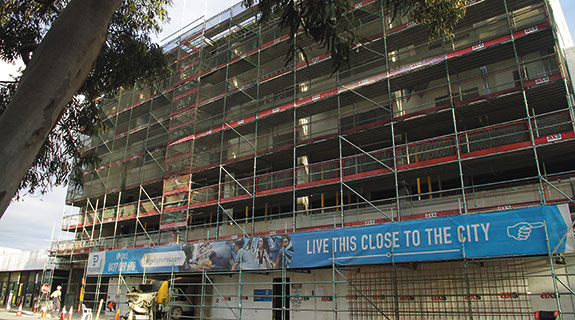 URBAN: A near-city location has been a key selling point for Psaros’ Edge apartments project.

The dynamic of Perth’s apartment market is changing quickly, with the big developers poised to take advantage.

Perth's big three apartment developers – Finbar Group, Blackburne Property Group and Psaros – say slowing sales are no concern, and are continuing to roll out new projects; but all three are being increasingly choosy about project locations.

Without the track record and balance sheets of the big three, however, smaller developers are being forced to the outer, with the record number of approvals not translating into new projects.

Research by Urbis, released last month, showed there were around 10,000 apartments in the application or the approval stage in Perth.

At the time Urbis’s quarterly research was released, director of economics and research David Cresp warned an approval was just a piece of paper, and remained just that until projects actually began construction.

And with banks not lending on a project until around 75 per cent of it is sold, slow sales mean project launches are being delayed after a record period of development.

Finbar Group managing director Darren Pateman said the soft sales market could be attributed to the market having a wait-and-see approach to local and global factors, including falling consumer confidence in Australia and the economic turmoil in the eurozone.

Another contributing factor to the slow sales, Mr Pateman said, was buyers getting locked into projects that hadn’t reached pre-sales targets.

“Buyers are typically expected to place a 10 per cent deposit for up to three or four years, with no certainty of delivery and no ability to get your deposit back until this sunset date has been reached and the project has not been delivered by the developer,” he said.

“This will financially restrict many buyers from being able to consider another property if the off-the-plan apartment they originally purchased is still up in the air and trying to be made viable or funded by the developer.”

However, despite that backdrop of uncertainty, Finbar is continuing to launch marketing for new developments.

Midway through last month, as Finbar reached the final stages of its $85 million Toccata project in East Perth, it started building the 112-unit, $66 million Linq apartments in Northbridge.

Finbar is also marketing a pair of projects in South Perth, one of which is its largest single-stage projects to date – the $380 million, 294 Civic Heart complex.

Mr Pateman said Finbar had around $400 million in pre-sales secured on projects either under construction or about to start.

Psaros managing director Mike Enslin had a similar view of the market – difficult sales conditions, which had lingered for a few months – but said his company was nevertheless still making sales.

Psaros has six projects either under construction or being actively marketed, totalling 401 apartments with a collective end value of $238.4 million.

However, Mr Enslin said current market conditions were increasingly being skewed in favour of buyers.

“We’ve been forced to drive down prices to a point where I’m of the view they can’t go down any further,” Mr Enslin told Business News.

“If you’re a buyer it’s certainly a good time to be out there, because you’re getting good deals from developers at rock-bottom prices, and the only way is up from here.”

Mr Enslin also said location was firming as the most important selling point, and not just being located close to transport links.

“Being able to walk to the shops, and if you can get to a pub or a restaurant, that’s an absolute bonus,” he said.

“If you don’t have to struggle too much for transport, it’s ticking a lot of boxes for people.”

But Mr Enslin said outside of Psaros, Finbar and Blackburne, new projects were hard to find.

“The oversupply talk is dying off because there isn’t much talk of launches anymore,” he said.

“But it’s going as we predicted; a bunch of developers aren’t going to start, and that deals with the supply issue.

“The notion of oversupply was never really there. Within six to nine months I can see pressure on prices, and it will move towards a sellers’ market.”

Blackburne Property Group is one of the rare developers increasingly active on the acquisition front and launching new projects.

Managing director Paul Blackburne said the company had settled around 250 sales in the past three months, worth $140 million.

“They were all very good projects, we’ve got our equity back and we’ve got our profit, and I’ve reinvested that money to acquire four new sites,” he said.

Mr Blackburne expects sales to be launched in August for a 73-apartment project in East Perth, named Enclave, and in September for a $45 million, 90-apartment development at Rockingham Beach.

Blackburne Property Group is also gearing up to launch sales for an ultra-high-end project at Minim Cove, near Mosman Park, while it recently purchased an Ascot Waters development site for $6.25 million.

Mr Blackburne said the timing was right for the group to be increasingly aggressive on acquisitions.

“A few guys are getting cautious on the apartment market,” he said.

“People who don’t really understand the long-term fundamentals of the WA market and the trend towards apartment living are a bit more cautious on land prices, therefore we see it as a time to increase our acquisitions and our forward pipeline of projects.

“There have been some people who do alright when it’s hot, but as soon as it’s a bit challenging they pull out.

“That will decrease supply next year and once the current supply gets absorbed, you’ll see the cycle return to a situation of undersupply as the less financially strong and less experienced developers withdraw from the market.”